Discussions on all aspects of China, from the beginning of the First Sino-Japanese War till the end of the Chinese Civil War. Hosted by YC Chen.
6 posts • Page 1 of 1

This as apparently a picture of the 103rd Division in the Matsuyamas battles of 1944. The officer at the front appears to be wearing different headgear than the other troops. Is it an Adrian-type helmet? Ot possibly he is wearing a cap with a camouflage net over it...

Looks like a round-brimmed pith helmet with camouflage netting.

That pic (taken by a U.S. Army photographer) is one of the more circulated photos depicting "Y-Force" troops during the 1944 Battle of Sungshan [松山； pinyin Songshan] in that it appears in Romanus & Sutherland's "Stilwell's Command Problems" (page 396), captioned "Chinese Troops on Kung Lung-Po Peak" (sic), and depicts troops from the NRA 8th Army's (sic) 103rd Division in the prolonged struggle for Kunlung-Po [滾龍波; pinyin Gunlongpo] ridge (July 24-Aug 3, 1944).

That said, one must refer back to the original photo in the U.S. National Archives, and any text associated with it, to find out more details.

I'm inclined to believe the officer in question is instead wearing a round-brimmed pith helmet. Something similar to what is shown in this photo below depicting "Y-Force" Twentieth Group Army C.O. Lt-Gen. Huo K'uei-chang [霍揆章; Huo Kuizhang 1901-1953] and staff crossing the Salween River (the officer third from left; General Huo is fourth from left).

According to the 2009 book 1944: Songshan Zhanyi Biji ("1944: Notes on the Battle of Sungshan"), which includes "The NRA 8th Army's 103rd Division Detailed Combat Report on the Encirclement Assault at Sungshan" (kept in the P.R.C. Second Historical Archives), it cites outright (page 395):

Although French-style "Adrian" helmets were worn by NRA troops serving in divisions that originated from the Yunnan or Guangxi/Guangdong provincial armies in the first half of the Sino-Japanese War, the NRA 8th Army in "Y-Force" was one of the more-favored Central Government Army formations. IMO if they had any helmets, especially by 1944, it would have been WW1-style Mark II's, or Chinese-produced (hence flatter-looking) copies of the German Stahlhelm.

For some more about the Battle of Sungshan, including this archaeological visit to reexamine the site where that famous photo was taken, this Chinese-language page might shed some more light:

Some corrections to the above:

Another instance of the picture of Lt-Gen. Huo K'uei-chang (with a pith-helmeted subordinate) crossing the Salween can be found here: 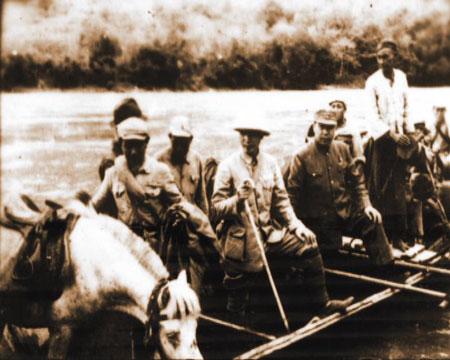 I agree that it could be the smaller sun helmet. I have seen drawings and photos of British soldiers wearing a pith helmet with an Indian-pattern camouflage net (i.e. one with wider holes than the standard European theatre helmet netting). It seems to have a wide brim and a round top. It seems an odd choice though. Officers who dress differently than their men are easy targets for snipers. Perhaps he is a staff officer visiting the front to have his picture taken

His coat is also much lighter than the other soldiers, and it looks like he has a map case or a pair of binoculars hanging from his neck....

I found the sun-helmets on this thread... this looks like part of the same film. There's an even better photo of a young soldier wearing one attached to the topic.

This is also part of the thread - amazing detail!

I only wish I had information on where and when---and who?