Discussions on all aspects of China, from the beginning of the First Sino-Japanese War till the end of the Chinese Civil War. Hosted by YC Chen.
5 posts • Page 1 of 1

Were there any special Chinese units that destroys Japanese tanks in the late 1930's and early 1940's? I wonder what were the tools of the Chinese soldier in disabling and destroying enemy tanks?

Edward, from the framing of your question, I'm presuming you're asking about anti-tank operations other than using artillery. (If I'm wrong on that, I can provide you a list of antitank artillery pieces in Chinese service.) I've never encountered any references to the Chinese having special anti-tank units prior to 1944 when "anti-tank companies" were created for the 78th and 85th Armies (both part of the 31st Army Group) to handle the Boys anti-tank rifle, which the Western Allies had started delivering to the ROC in July 1943. The Western Allies also supplied the M1A1 "bazooka" to the ROC in very limited quantities starting in July 1943, but with significant deliveries only beginning in April 1944, with the first units receiving theoretically full issuance of equipment being the 11th and 20th Army Groups, but there's no indication that special sub-units were created to handle the weapons. (This information is all from pages 311-313 of Kangzhan: Guide to Chinese Ground Forces 1937-45 by Leland Ness & Bin Shih.)

More abstractly, I think the critical thing to keep in mind in terms of Chinese anti-tank efforts is that most Japanese AFVs had very light weight armor even up to the end of the war, thus machine guns and grenades remained effective as infantry anti-tank weapons, unlike the ETO. Indeed, it's noted in Kangzhan that the ROC's interest in obtaining "anti-tank" weapons was driven in large part by interest in using them against bunkers, rather than AFVs.
Top 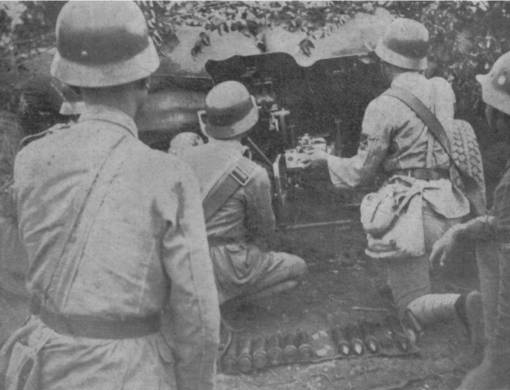 The propaganda of Sino-German cooperation.
Those German-made weapons once helped Chinese soldiers fight against Japanese.
You do not have the required permissions to view the files attached to this post.
Top

Thank you for the pictures that you put on line. I was thinking more of close combat against Japanese tanks by Chinese soldiers by using explosives,rifles,crowbars,etc.