Discussions on alternate history, including events up to 20 years before today. Hosted by Terry Duncan.
22 posts

Von Boсk did not want a Minsk pocket. But Hitler made him lose time in an unnecessary struggle with the Soviet armies doomed to destruction. Plans von Bock black arrows.

Avalancheon wrote: ↑
21 Nov 2018 05:36
Having Panzer Group 2 down in the Ukraine wasn't actually that big of a disadvantage for the Germans. When the attack on Moscow commenced, Guderians forces were able to approach from a direction the Red Army wasn't expecting. They quickly captured Orel with a coup de main and attacked Bryansk from behind, helping to trap them in a huge pocket. Though to be fair, all that running around had left Panzer Group 2 pretty worn out by that time. Hence why their extended push onto Tula petered out. 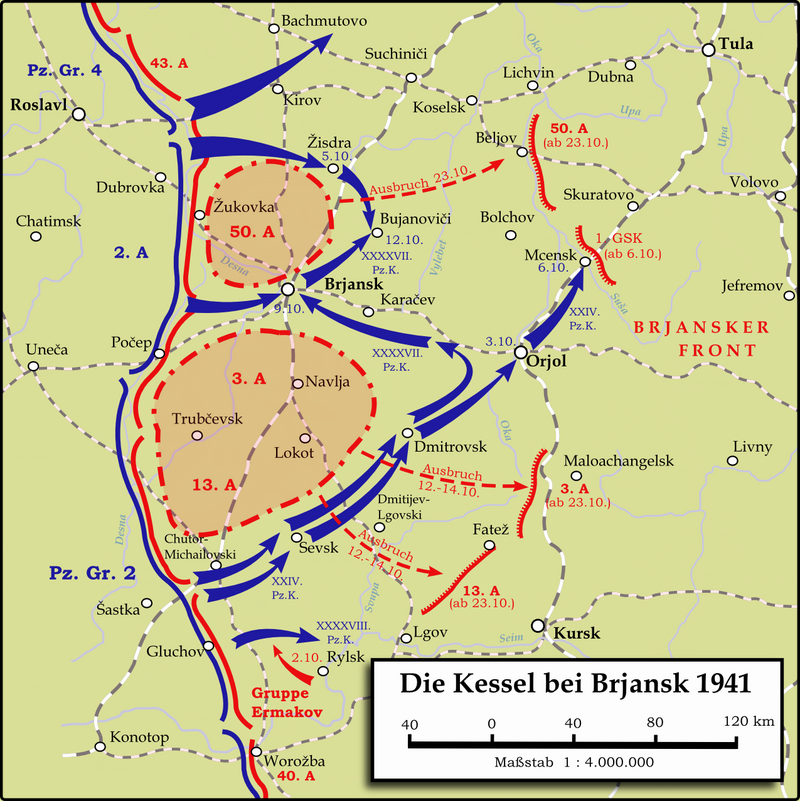 No need for pockets to Moscow. The strength of the blow weakened from the release of forces to fight surrounded. Without Hitler, the pockets could be 1000-2000 km in diameter. The scale of the captured territory is larger.
Top

Avalancheon wrote: ↑
21 Nov 2018 05:45
But with all that said, it isn't a foregone conclusion that the Germans couldn't have taken Kiev any earlier than they did. In early July, von Kleist actually wanted to use Panzer Group 1 to take the city with a direct attack (as called for in the original Marcks plan). Instead, Hitler split his forces into three separate groups and had them each pursue different objectives. This enabled them to create the Uman pocket, but did not allow Kiev to be captured. If von Kleist had been allowed to concentrate Panzer Group 1 against the capital, they would have taken it alot sooner.

Its unclear just how advantageous this would really be to the Germans, however. Sure, they wouldn't have to worry about that huge salient between AG Center and AG South. But they would also miss the opportunity to create the Uman and Kiev pockets that eviscerated the Red Army. Maybe they would be able to do a smaller encirclement in the capital itself, by doing a river crossing to the east of Kiev. That would enable them to bypass that nasty line of fortifications. A lot of serious thoughts about empty. One million prisoners, 2 million, 3 million, 4 million. The Red Army is nothing compared to the Germans. Uman was a mistake. Having achieved success in the Moscow direction, cutting off communications in the Volga region, the Soviet fronts to the south and north would immediately fall apart.
Hitler made changes to the plan of Macks. Instead of striking from the territory of Romania deep into the rear to Kiev, he forced to attack the north of Ukraine.

In another topic discussed. 150-200 extra kilometers the Germans passed, refusing to deliver the main blow from the territory of Romania.

Sorry for the late reply, when Jesk starts posting in a thread I lose interest.


You have both the 9th and the 3rd Panzer advance over very difficult terrain (the marshes around Demjansk), terrain basically without paved roads. At Bologoye, they would be liable to attack from three sides (from Leningrad direction, from Moscow direction, and from Yaroslavl direction) by forces supplied by rail. Meanwhile, flanks would be battered endlessly (think Totenkopf at Staraya Rusa x3-5).

The map I made wasn't clear but I have the 9th heading to Demjansk then Valdai Hills, with the 3rd going through Ostashkov to Bologoye from the South-East.

Hitler and Halder were talking about Bologoye in mid July and, and the latter even drew up plans for Hoepner to execute. While I agree that they would face tough opposition in taking/holding the city, the benefits would be significant. Cutting the rail junction there stops almost all movement to Leningrad making the AGN's direct advance (Luga) easier. It also had a large artillery park and chemical industry, and lastly it allows access to a further rail junction to be used to outflank Moscow.

Even if Bologoye turns into another Yelnya, at least it serves a valuable purpose.
Top


The map I made wasn't clear but I have the 9th heading to Demjansk then Valdai Hills, with the 3rd going through Ostashkov to Bologoye from the South-East.

The whole reason groups work in 3's is so that the middle groups flank is protected, and the inside wings can coordinate together. Russia is so large that the deeper the AG's go, the harder it would be to keep the gaps between them together.

AGN and AGS, were not large enough to achieve large encirclements on their own, and what made Kiev so effective was the cooperation between AGC/AGS. An accomplishment never achieved in the North.

You say that at this point the circumstances of Kiev being a threat didn't exist and that is true. But there was also no threat from Smolensk, it was only operational strategy that would dictate where the next blow would fall. If they attack Smolensk first Kiev becomes a threat, if Kiev first then vice versa.

As to its success, at this point in the war the Wehrmacht was too good, and the Russians too uncoordinated, for there to be a failure in a large German operation. IMO.

Lastly they wouldn't need to return to Minsk, they would attack in the area between Gomel and Bryansk which requires a lot less driving around.

This strategy doesn't necessarily change the assumption of a quick collapse, it simply prioritizes resources over Moscow and Leningrad.

PS- Thanks for the map Hanny, its pretty good!
Top
22 posts