Kashubian protest against the Treaty of Versailles in Bytów on 16.05.1920

Discussions on all aspects of Poland during the Second Polish Republic and the Second World War. Hosted by Peter K
2 posts • Page 1 of 1

Kashubian protest against the Treaty of Versailles in Bytów on 16.05.1920

Reconstruction and anniversary of the event will take place on 20.05.2019 (Monday) near Freedom's street (ulica Wolności) in Bytów:

"(...) March of Kashubians on Bytów was an act of protest against the provisions of the Treaty of Versailles. During the Paris Peace Conference of 1919 which reshaped the world after WW1 and delineated new borders, most of the territory of Bytów County (Kreis Bütow) became part of Weimar Germany. A large part of several thousand Kashubians living in that county protested against that situation. On 16 May 1920, when the International Border-Delineation Commission was visiting Bytów, several hundred Kashubians from Niezabyszewo (Damsdorff) and Ugoszcz (Bernsdorf) parishes - led by Bernard Werra, Jan Styp-Rekowski and Antoni Schroeder - came to Bytów during the so called 'march on Bytów' and delivered a declaration of their protest against leaving them within the borders of Germany."

In the whole county about 20% or a bit more were Kashubians, and in south-eastern part of it - the majority:

This map below is based on official German census of 1910 (green = Polish/Kashubian-speaking majority): 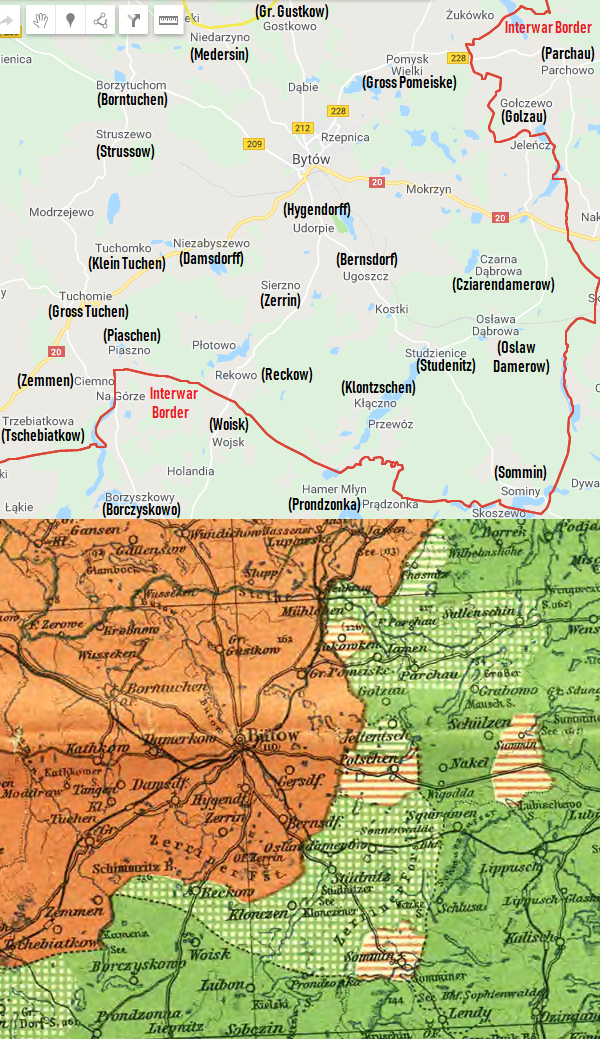 Maybe the census underestimated the number of Kashubian-identified people in some of "orange" villages?

Most of these villages have names of Slavic origin even in orange area (= German-speaking majority in 1910).
There are words which carry the presage of defeat. Defence is such a word. What is the result of an even victorious defence? The next attempt of imposing it to that weaker, defender. The attacker, despite temporary setback, feels the master of situation.
Top

Re: Kashubian protest against the Treaty of Versailles in Bytów on 16.05.1920

German-speaking and ethnic German are not necessarily the same thing. In the second half of the 19th Century Germany made a particular effort to Germanize its Slavic populations in order to consolidate the new German state as a more purely national one. If a Kashube (or other minority) under German rule wanted higher education, or to serve in the army, or work for the state, or join a profession such as law or medicine, he had to speak German fluently. As a result the growing towns, in particular, became more Germanized, even if much of their populations were not ethnic Germans.