Discussions on all aspects of France during the Inter-War era and Second World War.
7 posts • Page 1 of 1

A question about the higher-level structure (operational and admin HQs) of the French Armee de l’Air and French airbases:

According to the British General Staff’s Handbook of the French Army 1940 (p. 209), the French airforce was organized into four air regions with HQs at Dijon, Paris, Tours, and Aix-en-Provence; and with a fifth air region HQ for French North Africa. (This handbook was originally published as Notes on the French Army 1936, and I suspect was not brought fully up-to-date for 1940.)

I would like to understand whether the four air regions HQs simply became the four Zones of Operation HQs (i.e., both books are describing the same HQ with a slightly different English translation), or whether the air regions HQs remained as primarily administrative HQs administering the airbases in their respective regions, while the Zone of Operations HQs (perhaps each spun out of an air region HQ) handled operational matters?

I know that in the German air force all administrative activities in a region (including training, maintenance, signals, air defense) was handled by an administrative air force HQ (a Luftgau) as opposed to an operational air force HQ (which would commanded the operative air units based at an airbase). So part of what I am also trying to understand is whether the individual French airbases were under the command of an air region HQ or a Zone of Operation HQ (assuming they are different) or of some other administrative or operational HQ. The Handbook of the French Army 1940 states that French “[a]ir bases are administrative units, under a colonel, and provide for general ground services, instruction and training (including reservists), provisioning, repair, mobilization and garrison duties” (p. 209).

Finally, with respect to French airbases, I know that an Air Battalions were used to operate larger French airbases and Air Companies smaller French airfields. I had assumed that the administrative services an Air Battalion provided was primarily ground services for the operation of the airfield, but wondering if it also included other administrative functions of an airbase, such as the training, provisioning, and garrison duties that a “war depot” or CMI would have provided in the French army, or whether the French Air Force had its own war depots and CMIs at airbases? (I know from Loic’s answer to another post I made that there were specialized signals, munitions, fuel, and logistics companies, as well as hangar companies, aviation parks, and balloon units.) 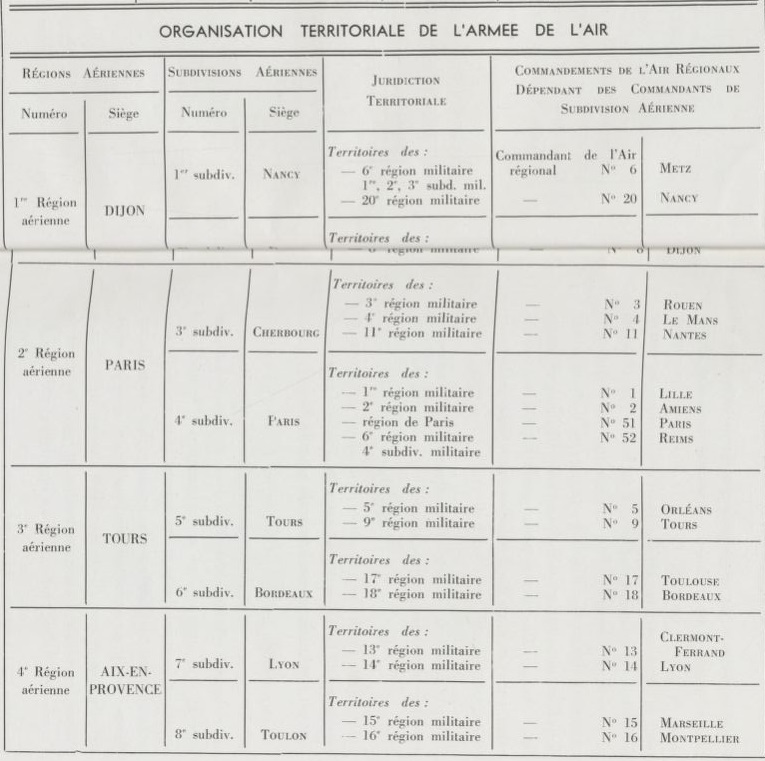 
Regards
Loïc Lilian
You do not have the required permissions to view the files attached to this post.
Top

Thank you! That is extremely helpful (as your posts always are). And thank you for the links: I was not familiar with any of these websites and I am looking forward to going through them carefully.

What is posted on the www.passionair1940.fr website already looks very interesting/helpful and if it is completed it will be an incredible resource on these topics.

So part of what I am also trying to understand is whether the individual French airbases were under the command of an air region HQ or a Zone of Operation HQ (assuming they are different) or of some other administrative or operational HQ.

indeed but also the Bataillons de l'Air were fixed support units existing since the peactime Interwars period in the usual main military airbases while the Air Companies, despite it has existed some previous cases of these companies for secondary or auxiliary bases with the several peacetime reorganizations in the years 30, were rather wartime units raised at the Mobilisation of 1939 mainly concentrated in further wartime provisional airfields in the Northern, Eastern and even Southeastern Zones of the Air Armies/(Armées Aériennes disbanded in february 1940) becoming Zones of Operations facing Belgium Germany Italy so the borders and adjacents areas from Flanders Picardy to Provence throught Burgundy

the Air Battalions were disbanded, at least in these northern and eastern areas of Air Armies/Operations Zones, replaced by Air Companies while they were still maintained in the Zone of the Interior Regions
the Air Companies due their location, first were not fixed units contrary to the Battalions because they can move and be located in an other airfield, and despite poorly armed could be fighting units given the circumstances, the fact is that 110 of them were recognized as fightings units throughout the may-june 1940 campaign, among the remaining Air Battalions none was recognized as such

this is mixing two organizations, territorial and operational

initial organization, right part omitting the Air Armies with operational commands was modified throughout wartime in 1939-1940 as seen above
CaptureAir.PNG
the Air Ministry retains authority over the interior zone and over the air regions, i.e. air bases, schools, the various Air Force establishments (warehouses, workshops …). Air regions where Air Armies units are stationed are subordinate with regard to the support of these units to the Armée Aérienne commander. The Air Minister who is assisted by General Marcel Tétu, appointed Chief of Staff of the Air Force, has many prerogatives on issues essential for the conduct of the war such as the manufacture of equipment, the recruitment and training of personnel, the territorial organization and the functioning of the services in the interior zone. This split between the interior zone and the Zone of the Armies reproduces the organization of the Great War which had been so detrimental to the development of aviation.
You do not have the required permissions to view the files attached to this post.
Top

Hi Loïc, Thank you for the further explanation. That is very helpful. Seems similar to how the Luftwaffe handled this with the Luftgau handling administrative activities and operational air commands controlling the flying units. I am guessing other air forces had a similar structure in that regard too. Best regards, Greg
Top
7 posts • Page 1 of 1