Bagpipes at war. What songs were played at the battlefield?

Discussions on all aspects of the The United Kingdom & its Empire and Commonwealth during the Inter-War era and Second World War. Hosted by Andy H
22 posts

Bagpipes at war. What songs were played at the battlefield?

Long time ago, I've watched a film about Dieppe (?), and in it there was a scene in which soldiers were advancing with a musician that was playing on a bagpipe. I know that I'm writing in a complicated way, but I can't write better in English

I don't know if that scene in film was related to a real event, but if so, what melodies were played at the battlefield by bagpipers? I'm beginning to love bagpipes, so I would like to know what songs I must look for.

You may be referring to the scene in the movie The Longest Day. In the scene Lord Lovat of the Commandos orders his piper to play Blue Bonnets Over the Border. However, the movie scene has him playing Black Bear.
Top

Thanks! Were there any other songs played on bagpipes on the battlefield? Was there a special selection of such songs, or the musician could play any song that his commander ordered?
Top

Re: Bagpipes at war. What songs were played at the battlefie

Meczyk wrote: I know that I'm writing in a complicated way, but I can't write better in English

Your english is excellent. You write better than some native-speakers do.
Not hard to understand for the non-native speakers either.


Interesting question this of yours.
Top

As I understand it, the playing of the pipes during WW2 on the field of battle was actually against military regulations and it happened on only a few occasions. This was because, during the early months of the Great War, there had been a horrifying toll of pipers who were leading attacks across open ground: inevitably burdened by the heavy pipes they were a prime target. From (I believe) mid-1915 they were required to remain in the trenches when their regiment went over the top.

This was not always observed though: a Canadian piper called James Richardson won a posthumous VC for playing in action in 1916. He had been given permission by his CO to accompany his regiment (the Manitoba Regt) in an attack, but they encountered heavy fire and were stopped at "strong wire", sustaining heavy casualties. Richardson "strode up and down outside the wire, playing his pipes with the greatest coolness. The effect was instantaneous. Inspired by his splendid example the company rushed the wire with such fury and determination that the obstacle was overcome and the position captured." Having survived this and a subsequent skirmish, Richardson was accompanying a wounded comrade and some prisoners to the rear when, having gone about 200 yards, he realised that he had forgotten his pipes and turned back. "Although strongly urged not to do so, he insisted on returning to recover his pipes. He has never been seen since and death has been presumed accordingly owing to lapse of time."

Returning to WW2: Dieppe and Normandy have already been mentioned. Pipes were also played on the battlefield at El Alamein and during the crossing of the Rhine. I have a feeling that there was a piper in the Battle of Kohima too.
Top

You might want to check out Caber Feidh. I'm not sure which tunes may have been played in the Second War, but this one was was played for numerous battles in the First War, and the loss of pipers was horrible. It's the tune that was played for a charge. Today it's termed "Dress For Parade". I guess pipes are no match for automatic weapons fire.

I B Piper
Top

I know that bagpipes aren't bulletproof, and I hope that all fallen bagpipers are now playing on the green fields above us. Those melodies bring back the "old spirit", that atmosphere that was present on the battlefields. I'm far from glorifying war, but those tunes are really pleasant to hear.
Top

There's no question about the power of the pipes to arouse spirit, in many different ways. The movie Juyeux Noel is about Christmas Eve, 1914. I guess music in general is like that, and pipes can be a musical instrument, as well as an instrument of war. For me, they are at their worst when badly tuned. When they are well tuned, even a beginning piper can sound good.

JamesL is correct about the tune played in

The longest Day, it was Black Bear, not Blue Bonnets. Blue Bonnets is a nice 6/8 tune, and some other 6/8s that are very nice for marching are Cock of the North and Atholl Highlanders. Black Bear is a hornpipe tune.

Lord Lovatt may have called for Lord Lovatt's Lament, which can be played as a march, but when played as a lament, it's about Simon Fraser who was killed by the English, so it might not be well recieved by some of the troops who were not Scottish.

Some marches in 4/4 are Scotland the Brave (of course), Wings, Battle of Waterloo, Meeting of the Waters and Flett From Flotta. Marches in 2/4 could have been Brown Haired Maiden, Barren Rocks of Aden, Campbells Farewelll to Redcastle and High Road to Gairloch. There are many, many more.

By the way, the piper in the James Bond movie, The World is Not Enough is playing Flowers of the Forest.

I B Piper
Top

Re: Bagpipes at war. What songs were played at the battlefie

does anyone knew this bagpipe tune in this video

Vitesse wrote:As I understand it, the playing of the pipes during WW2 on the field of battle was actually against military regulations and it happened on only a few occasions. This was because, during the early months of the Great War, there had been a horrifying toll of pipers who were leading attacks across open ground...

Returning to WW2: Dieppe and Normandy have already been mentioned. Pipes were also played on the battlefield at El Alamein and during the crossing of the Rhine. I have a feeling that there was a piper in the Battle of Kohima too.

Perhaps it was a little more common than you suggest here. I noted the following passage describing one of the attacks in the Tobruk breakout on Nov 21st, 1941, in which the 2nd Battalion The Black Watch (with Matildas of 4th RTR leading) assaulted the strongpoint of "Tiger", defended by a mixed force of Germans and Italians:
"The defenders of Tiger lived up to the British nickname for their position and offered ferocious resistance, to which was added heavy fire from neighbouring strongpoints. As detachments of I tanks slowly closed in from three sides, the bagpipes (hitherto silent for security reasons) sounded above the noise of battle. One piper, wounded, continued to play where he fell. Then at 9 a.m. the battalion, now numbering fewer than 200, rose in the wake of B Squadron and took Tiger at the point of the bayonet. One stubborn party of machine-gunners held out in the south-west until the tanks ran over it." (The Relief of Tobruk, W.E. Murphy, pp. 92-93)
Unfortunately, no mention there of what the pipers played...

Meczyk wrote:Thanks! Were there any other songs played on bagpipes on the battlefield? Was there a special selection of such songs, or the musician could play any song that his commander ordered?

Bill Millin was the piper on sword beach D day, he was asked by lord lovat to play highland laddie, then he walked up and down the beach playing the road to isles, the Germans thought he was mad so didn't shoot him, he survived well into his 80s, lovat survived as well and Millin played at his funeral in 1995, this is the true story, he also advised on the film the longest day
Top 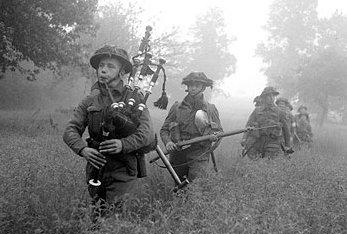 I have just been reading a history of the London Scottish in WWII (by Brigadier C.N. Barclay). This territorial regiment maintained its Scottish ties, traditions and uniform items throughout the war and received reinforcements from the Infantry Training Centre (ITC) Aberdeen. Three battalions were raised; the 1st fought in Italy, the 2nd never left home, the 3rd was converted to HAA artillery and also fought in Italy.

I found no mention of pipes being played in battle but the repertoire for various noncombat occasions is listed, as during a visit of HM the Queen to the 2nd Battalion on 29 May 1941 (at Rottingdean in Sussex).

As indicated, the regimental march was "Highland Laddie" which they shared with the Black Watch I believe.
You do not have the required permissions to view the files attached to this post.
"The true spirit of conversation consists in building on another man's observation, not overturning it." Edward George Bulwer-Lytton
Top

Here's a picture of the lord with his
hunting rifle and piper, Bill Millin
https://lockerdome.com/warhistoryonline ... 1822243092

Lord Lovat ordered Private Bill Millin to play Hielan' Laddie, a tune also known as Highland Laddie. Private Millin declined, reminding his commanding officer that it was against British War Office regulations. Lord Lovat replied, "Ah, but that’s the English War Office. You and I are both Scottish, and that doesn’t apply." So Bill Millin played the ancient march as the troops waded ashore on Sword Beach. Later, he led them down the beach, piping Road to the Isles.
Bill Millin was amazed that he was not shot. Not only did he play standing up, but with his great highland bagpipes skirling over the noise of battle, he was hard to ignore. Some time later, captured German soldiers told him they did not shoot him because they thought he was just a crazy man.
https://www.dailykos.com/stories/2011/6/6/982703/-
It’s correct. That’s the same story that Bill Millin told to me in 2009 when I met him personally in Normandy
Kindly Regards
Prosper