Discussions on the Allies and the Neutral States in general and the countries that does not have sections of their own.
4 posts • Page 1 of 1 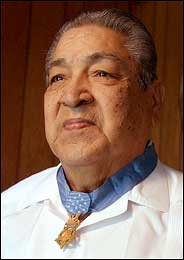 Lucian Adams, an Army sergeant in World War II who received the Medal of Honor for a single-handed assault on German troops that opened supply lines for an isolated American battalion, died on Monday in San Antonio. He was 80.

Mr. Adams had been in poor health, but the cause of death was not immediately known, said Rose Adams, a daughter.

He was awarded the medal for his actions in the autumn of 1944, when the Third Infantry Division was fighting in the Vosges Mountains of eastern France, having come ashore on the Riviera on Aug. 15 in Operation Anvil, the invasion of southern France.

On Oct. 28, Sergeant Adams's company in the division's 30th Infantry was blocked by German troops in a forest near Saint-Dié while trying to reinforce troops that had been cut off.

The company had advanced less than 10 yards, suffering three dead and six wounded, when Sergeant Adams charged forward in the face of German machine-gun fire, dodging from tree to tree while firing a Browning automatic rifle.

While machine-gun bullets flew and rifle grenades struck the trees over his head, showering him with broken branches, Sergeant Adams pressed forward. He came within 10 yards of the closest machine gun and killed the gunner with a hand grenade. Next he used his rifle to kill a German soldier who was throwing grenades at him from 10 yards away.

Sergeant Adams then killed a machine-gunner 15 yards away with a hand grenade and forced the surrender of two German infantrymen. The remainder of the German force continued to direct machine-gun fire at him, but he made his way through the wooded area and killed five more Germans. He then killed another German machine-gunner.

"I'd seen all my buddies go down and calling for medics, and I didn't want to go down with any ammunition still on me, so I just kept firing, and lucky for me that I got them before they got me," he told The Dallas Morning News in 1993.

"In combat, I had no fear," he said in an interview with The San Antonio Express-News last year. "None, until the events were over, and I began to realize how serious and how dangerous the situations were."

Mr. Adams received the Medal of Honor, the nation's highest military honor, on April 22, 1945, at Nuremberg, Germany. The medal was presented to five members of the Third Division by Lt. Gen. Alexander M. Patch, commander of the Seventh Army, in a ceremony at Zeppelin Field, once the site of Hitler's huge Nazi rallies.

Mr. Adams, a native of Port Arthur, Tex., who also won the Bronze Star in the Italian campaign, left military service in 1945. He worked for 40 years as a benefits counselor for the Veterans Administration in San Antonio.

In addition to his daughter Rose, he is survived by another daughter, Grace Fawcett, and a son, Lucian Jr., all of San Antonio; three brothers, Roy, Albert and Lawrence Culver, all of Port Arthur; three sisters, Beatrice Culver of Port Arthur, and Juanita Culver and Estelle Maltos, both of Houston, and two grandchildren. His marriage to his wife, Linda, ended in divorce.

"I never brought up the fact that I'd been in combat myself and been awarded the Medal of Honor," Mr. Adams told The Express-News in recalling his years as a veterans' counselor. "Because I'm no hero. I'm just an ex-soldier."

"I'm no hero, just an ex-soldier"
I wish that I could be just half the man that this fellow was.
KIm
Top

Kim wrote:"I'm no hero, just an ex-soldier"
I wish that I could be just half the man that this fellow was.
KIm

You may not be a war hero but I would venture a guess you are (at least) half the man Mr. Adams was. And that, I think, is saying quite a bit.


-------------Sounds like Sgt. Adams was far more than just an ex-soldier. The legions of heaven will be enhanced by his presence. I would like to salute an extrordinary man.