A section dedicated to photo threads on panzer and other Axis vehicles.
218 posts

Your feeling deceived You. Here a pic of a CDSW from nearly the same angle of view for comparing (source of the pic: "British Military Trucks in Wehrmacht Service" by Jochen Vollert.

Hi Bert,
What particular features do you feel set these apart? I cannot isolate any particular differences, but my attention to detail comparison can be pretty poor!
Thanks,
Kerry.
Top

Hi Bert,
I have enough pictures of CD/SW, British and captured either, but thanks anyway.
I hope it wouldn't sound offending but I'll never dare to describe the situation on the two pictures below as "nearly the same angle":

Well, I still think that WH-1155513 is CD/SW, for the canvas roof seems to me too long for any other Morris Commercial product with the same front end.
What your proposal of the model is?
Cheers!
"...and on the 8th day He made truck so that man, made on 7th day, had shelter when woman threw him out for the night."
Top

excuse me, please, for my old mistake to be not accurate enough with my words. Of course, You are right, it is not nearly the same angle of view.
But to the ID of this vehicle and the differences between PU and CDSW:
there is a different tyre size: PU: 9.00 - 13, CDSW: 9.00 - 16
and there is a different width: PU: 79 in., CDSW: 88 in.
a good feature for a differentiation of both types is the bumper and the front mudguards. The bumper and the mudguards of the PU are not so high as of the CDSW.
Here pics of both vehicles. I hope You can follow my explanations.

here some mor pics in the hope they will support my point of view.

Hi Bert,
Be careful with these (and, in that matter, with all British vehicles).
No need to involve also the small 8cwt PU model here. All umbaus are based on CS8 (15cwt). The last one could be CD/SW but nothing is sure. This is my feeling only, as I said. But it isn't PU anyway.
If with "bumper" you mean the radiator guard, then keep in mind that with different marks it may vary, so I wouldn't recommend you to use it for ID. The same for the front mudguards.
BTW, it isn't correct to compare the dimensions this way. You gave the width of PU with GS body and the width of CD/SW with LAA body (I guess so, it could be a breakdown body but this doesn't change the picture much). It is considerably wider.
Cheers!
"...and on the 8th day He made truck so that man, made on 7th day, had shelter when woman threw him out for the night."
Top

Bert and ilfil,
Interesting points on the relative sizes. But, if as ilfil says, it cannot be a PU, no problem, the CS8 was actually one inch narrower than the PU. From all source material which I can find the CD/SW was the same width regardless of body style. So the CD/SW was, to all intents and purposes, ten inches wider than the CS8. I suppose the C8 FAT was even wider at 90 inches, and umbaus were certainly produced by cutting down these tractors, but I would agree that it cannot be one of these. I feel that Bert has used the term PU to cover the CS8, simply using it for illustration purposes. It is always very difficult to judge sizes from varied angle shots, but, on balance, I also feel that the last example has all the appearance of being a CS8 conversion, but that is just an opinion, flawed as it may be.
And Bert, thank you for outlining the differences, I was correct, I am not good at spotting what should be clear. I see overall shapes but miss a lot of detail, it is helpful to be pointed towards details which are diagnostic.
A very interesting conundrum, fascinating debate by you both,
Kerry
Last edited by kerryboo on 27 Nov 2016 10:55, edited 1 time in total.
Top

thank You very much for Your replies. Very interesting, what You wrote. But I cannot agree with You, till now. I have the information and pics, that there were Umbauwagen (conversions) of both types: PU and CS 8.
The PU 8 got an "Aufbau Kfz. 12" body to seat four personell. The rear cargo bay was removed, new side panels with typical German doors with an nagled rear (as opposed to the original rectangular doors) and a new rectangular windscreen have been fitted. And the conversion with a Kfz. 12 body also included a convertible folding tarpaulin roof.
There were different conversions of the CS 8. But some also got a new rectangular single-pane windscreen to replace the two British separate windshields. They were converted to AT gun towing vehicles for the 37mm light PAK 35/36. The rear body was converted with ready-ammunition boxes accessible directly from the outside and fitted to the rear body of the CS 8. The converted rear body is similar to the "Krupp-Protze" type L 2 H 143 because of the ready-ammunition boxes. Information and pics out of the book: "British Military Trucks in Wehrmacht Service" by Jochen Vollert.

Hi guys,
Intresting discussion indeed. I'll try to answer in order of your posts, in hope I would't miss something.

Kerry, talking about British vehicles those Morris Commercial military C series are probably the easiest for ID. With one exception: you can't distinguish on pictures late CS8 marks and C4, for they are the same and only the engine is different.
Those PUs are immediately recognizable: they have smaller wheels with balloon tyres and are fitted with standard 8cwt GS body with foldable legs on the sides. The same bodies were fitted also to Humber Snipe and Ford WOC1 chassis, to mention just two; they were detachable and the idea was to use the bodies when necessary as a tents/shelters separately, that's why the foldable legs are there. This illustrated looks so:

All 8cwt trucks fitted with this body have rear mudguards, this is yet another ID point for the PUs, the only C series Morris model who have them.

With the PUs sure ID point is the distance between the cab and the body, with locker and the spare wheel in this space. There is no such distance on CS8/C4, on them the bodies were tight fit behind the cab because they have no spare wheel: the early marks were fitted with runflat tyres and on the late marks with normal tyres the spare was carried inside the body.
You mentioned some "CS8 FAT", I guess you've had in mind the "Quad" C8 which is totally different vehicle, mechanically and visually either. But true is true: there are some very interesting umbaus on this 4x4 chassis too, pity it doesn't fit the scope of this discussion.

Bert, did I said there weren't PU umbaus? Mein Gott, this is serious charge! Certainly everything on C series chassis was captured and used in the Wehrmacht in its original form or upgraded to suit the needs and taste of the Heer, Luftwaffe and Kriegsmarine, and there are pics of some even with civilian number plates!
Well, enough boring you.
Cheers!
"...and on the 8th day He made truck so that man, made on 7th day, had shelter when woman threw him out for the night."
Top

ilfil,
My apologies, I mistyped, instead of CS8 FAT I should have put C8 FAT. Obviously the term Quad is not an official title, other than in the case of the Guy Quad-Ant, it merely denotes a 4x4 configuration, a form of shorthand description. I just mentioned the occasional use of C8 chassis for umbau conversion out of interest, I was not suggesting that any of the photos were of such a construction. I think we all accept that light personnel carriers were formed from both PU and CS8 base vehicles according to availability and requirements. Where some confusion may have arisen was when you said that all umbaus were based on CS8(15cwt), by which I am sure that you intended to say that all of the photos in question were such, not that ALL Morris Commercial umbaus were based on CS8s.
Kerry.
Top

Hi Kerry,
You got it right, surely saying that all umbaus are based on 15cwt CS8s I've had in mind only the pics posted here. That one, the WH-1155513, could be CD/SW indeed, I'm still not sure. The pic quality isn't that good but it looks like the fairleads, or their remnants, are there.
Cheers!
"...and on the 8th day He made truck so that man, made on 7th day, had shelter when woman threw him out for the night."
Top

FWIW in my opinion Bert makes some compelling arguments that make me think that the 2nd Kübel is based on a PU chassis. One thing I feel should also be considered is how the brake drum housing is better visible on a PU than a CS8 or derivative: Please compare this PU 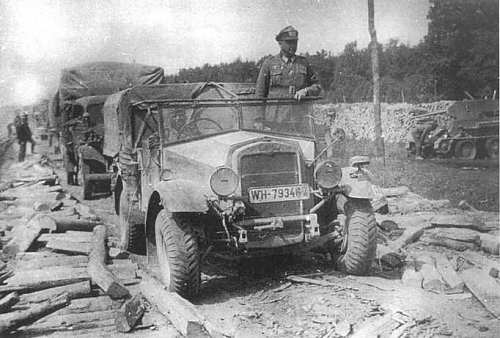 with the 2nd Kübel thank You, Markus, for supporting my opinion. To go on with the discussion here a pic of a German Umbau of a CDSW, also converted to an AT gun towing vehicle for the light 37mm PAK.

Hello again,
Nice picture Bert, it is the first time I have seen this configuration. There are many variations on the vehicles made by Morris-Commercial, here is another strange one to add to the mix,
Kerry.
Ps note the Cyrillic writing on the mangle.
K.
You do not have the required permissions to view the files attached to this post.
Top

Hi Markus!
Damn right! Those brake drums, well spotted!
I'm afraid I have no choice than to agree that the long discussed here WH-1155513 is PU umbau. Like this one most probably:

Thanks for that and cheers!
"...and on the 8th day He made truck so that man, made on 7th day, had shelter when woman threw him out for the night."
Top
218 posts