Discussions on the equipment used by the Axis forces, apart from the things covered in the other sections. Hosted by Juha Tompuri
17 posts

Looking for web-site(s) covering the use (were they operational ?), of the Germans use of anti-bomber rockets fired from the ground. Images welcome.

take a look to my site
http://arse.freeweb.org

in particular to this page

Good links, but do you have any figures for any of the rockets if they were operational against the Allied 4-motor bombers... ?

no G to A rocket was actually operative...
only some operational tests were made for the schmetterling.

Looking for web-site(s) covering the use (were they operational ?), of the Germans use of anti-bomber rockets fired from the ground. Images welcome.

The Wasserfall was tested but was never operational.
8)

Thanks Scott for the pic and drawing ; so it appears that no ground to air rockets were in use ? Did think that were at least 20 or so fired in protection of the larger cities.......

I once heard about a "Rakettenwerfer" (Rag 38?) which was capable of fireing an "anchor" attached to a steelwire. The anchor had a parachute attached, so it stayed a minute or the up in the air....
This is supposed to have been used against low level anti-shipping strikes.
A very reliable source also claims that this weapon downed 2 Beaufighters early 1945........

Anyone got some more on this?

There were USAAF bomber crewmen reports of seeing ground to air missiles trailing smoke from below and destroyed a few USAAF four engined bombers.

There are such reports indeed, even alleged photos of smoke trails - sadly it's hard to find any German rockets or missiles that could be used in combat.

But, two more thoughts came to my mind.
Germans did not have operational liquid fuelled rockets or missiles till the end of the war. Their solid fuelled rockets used smokeless propellants and had relatively short burning times, in the order of 1 s, so their exhaust could not be observed farther than 200-500 m from the launcher, and was absolutely invisible on high altitudes.
Germans however had specific Flak shells with smoke tracers for observing their trajectory. Maybe they are responsible for reports about AA rockets?
Top

Hi Erik, which is the source?
Thank you
Top

The book Last Days of the Luftwaffe: German Luftwaffe Combat Units deals extensively with a lot of the late war German projects and it is pretty clear that the technology for workable SAMs wasn't available at the time.

The book is excellence about illustrating how long development time these advanced weapons had. Work on the Me-262 had been going on for several years and it was only March 1945 before squadron sized numbers were deployed. The aircraft was so successful that the allies decided it was a serious threat and it took them 10 days to destroy that threat (by destroying its ground support and installations). Interesting was that the Germans were still a very long ways aways from deploying the aircraft in the numbers need to really impact the airwar.

My favorite fact from the books was that the prototype of the Me-263 shot had as many confirmed claims as the He-162 - one.
Top

On the subject of SAM's, the Germans got no further than a number of missile projects and test firings of these, Wasserfall, Enzian, and Rheintochter are representative. The control system, where one existed, in testing was the same joystick Dortmold system used to guide the Fritz X or Hs 293. This was completely inadequate for operational use, and at best useful only for the coarsest testing of flight control.
The Elsass system using the Mannheim and Rhiengold radar but retaining CLOS flight guidance (eg., the joystick) was also completely inadequate as both the Nike and S-25 Berkut systems (the first two successful SAMs in order) show. Additionally, Wasserfall proved in postwar US and Soviet testing to be a marginal design aerodynamically with completely unworkable control surfaces at transonic and supersonic speeds (see the US Hermes program or Soviet R-101 development).
Of the existing German programs the subsonic Rheintochter probably had the most chance of success as a short range SAM. 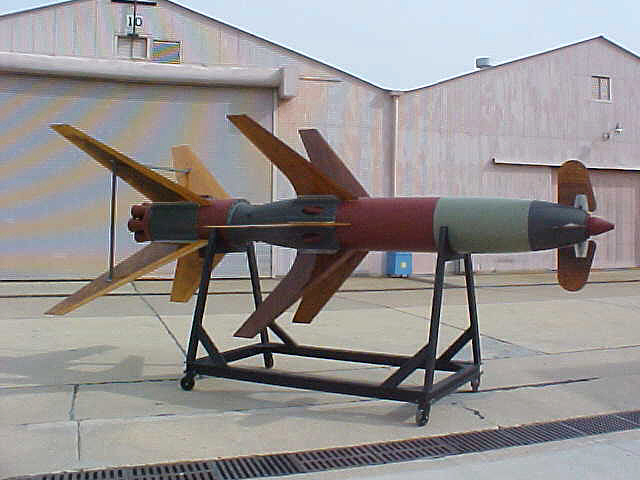 It was a bit odd in having two motors but being one stage. This design was likely chosen because having the booster section (roughly the rear half of the missile) separate greatly complicated the engineering. In use it would have had a range of about 10 km or so. What makes it the most likely candidate is the missile worked reasonably reliably, had a workable design for control (nose control surfaces), and a sufficiently large warhead that with even command detonation it only had to get close to work. As stated earlier, what the Germans lacked was a reasonably workable guidance system for it.

Late in the war, the Germans also developed and deployed the Taifun and Hs 297 Föhn unguided rocket systems. Taifun was a good design but the choice of liquid fuel made it unreliable both in testing and operation. It was good enough that postwar both the US and Soviet Union made large scale use of it as a research rocket after quickly realizing it was worthless as an antiaircraft rocket (See the Soviet R-103 or US Loki program).
The Hs 297 was a smaller 7.3cm solid fuel rocket fired from a multiple box launcher. It resembled rather closely the early to mid-war British 2" UP rocket in design and use. Like it's British equivalent it was really too small, too inaccurate (even fired in large numbers), and too short ranged to be of any real value.
The larger Taifun didn't see operational deployment before the war ended. Its liquid fuel engine was never fully sorted out. But had it gotten into service it would have proved about as effective as the simpler British 3" UP rocket which is basically ineffective.
Top

Rheintochter R 1 was a two stage rocket, the booster was to be jettisoned a second after launch or so.
The Taifun did have a solid fuelled variant too, offering roughly the same performace, just with slightly bigger weight, actually vast majority of ordered production rockets was solid fuelled.
Foehn in its basic 7,3 cm variant was a very poor weapon, what was clearly recognised by the Germans, who considered it as support for conventional light Flak only, but high performance variants were being developed. BTW, the rocket was never designated as the Hs 297 or Foehn.
Top
17 posts