Discussions on the equipment used by the Axis forces, apart from the things covered in the other sections. Hosted by Juha Tompuri
29 posts

Zygmunt wrote:I don't know about seeing ships go down, but I'd have expected to hear something. Granted, the water muffles the explosion etc, but if the ship was really that close, and sank that quickly... am I wrong?

Torpedoes sometimes swam too deep; the pressure on the U-boat meant that the sensors on the torpedoes gradually recalibrated themselves, and when launched would go straight, but pass below the target. Before proximity fuzes, this meant the warhead would not detonate.

Zygmunt - the IDEAL torpedo-hit would be where the torpedoe's magnetic pistol sets it off some 1 - 4 metres UNDER the target, breaking it's back - i.o.w. - keel. Of such a detonation little is heard above water and even less, some HM's away. Visually - all that would be seen would be some waterspouts close to the target - but even then - 'a merchant ship' even laden with iron ore (of which there were very few in transatlantic convoys) would take a little bit more than the 'lighting of a cigarette' - to die.
Top

Yep, I agree with that Varjag. Indeed, there is a wreck just north of The Isle Of Wight (which you can dive, because it is not a war grave) of a British frigate sunk in 43 or 44 as a test of the 'back-breaking' torpedoes. One warhead snapped the ship's keel pretty effectively, exactly as you describe, and the test was declared a success.

But what I'm talking about is when the torpedoes go too deep for the warhead to even be triggered. I got all this from a book called "Submarine Vs. Submarine: the tactics and technology of underwater confrontation". 1st ed. New York: Orion Books, c1988. 191 p.
Originally published: Newton Abbot: David & Charles, 1988.

Zygmunt - you're quite right in that any influence on a torpedo easily results in a 'dud shot'. It dives too deep - or as the German Torpedo Inquiry deduced in 1940 - the magnetic pistols in the G7's that 'schooled' during the Norwegian campaign - were incorrectly designed for the high latitudes where they were used - or something to that effect. U-Boat commanders swore that if their torpedoes had worked properly in April and May 1940 - there wouldn't have been a battle-worthy British Fleet to oppose Sealion. An exaggeration of course - but they DID have real problems then and it took a long time to overcome them. But alas - they should have - done that checking BEFORE the war, not in it.
Top

Makes perfect sense to me.

In the book I mentioned (which I admit is one of the few texts I have really read on submarine warfare), the author hints that the U-boat techies did in fact have all the info they needed available from their experiences in WW1, but just didn't 'get around to it' until they started getting duds in the second war too.

American torpedoes were the worst, the Germans and the British next. But the Japanese were the best. One good book to read is the HELLIONS OF THE DEEP BY GANNON. M.L.Anderson
Top

Matt L wrote:Wow- that dent must've sent cold shivers up the spine of anyone who realized what it was...

I'm not all that surprised about ore freighters sinking faster than tankers- only a tanker carrying refined fuel would be REALLY bad- crude oil doesn't burn all that well afterall. But ore is dense and heavy. A 300+kg warhead would rip a REALLY big hole in an unarmored ship's hull...

Shock wave in a liquid always destroies the container. Never shoot a beer-can? If empty there are only 2 holes, if fullfilled the can explodes. The same thing happened to heavy-oil tankers when hit directly. About fire probability, in Mediterranean no Allied or Axis tanker was sunk without burning large part of the crew. A cruel side of war on seas.
Top

Shock wave in a liquid always destroies the container. Never shoot a beer-can? If empty there are only 2 holes, if fullfilled the can explodes. The same thing happened to heavy-oil tankers when hit directly. About fire probability, in Mediterranean no Allied or Axis tanker was sunk without burning large part of the crew. A cruel side of war on seas.

I didn't say that crude oil DOESN'T burn- of course it does. I was simply commenting on the fact that an oil tanker probably wouldn't sink as quickly as an ore freighter because it wouldn't be blown apart like a refined fuel tanker would.

With regards to the beer can analogy, it only works with a sealed, pressurized can. A tankers' tanks weren't filled to capacity and it wasn't a sealed system like a full beer can is. If you shoot an OPEN beer can, the beer shoots out the opening and you do get only 2 holes...

varjag wrote:Tom Neifer - I would have say that your f.i.l.'s description of a merchant ship disappearing totally 'while lighting a cigarette' - is perhaps erring on the Hollywood side of reality. 'Dead-weight' laden ships and certainly, as has been noted - iron-ore carriers - are prone to a quick demise, whether by torpedo or weather. Tankers - were, and are - very hard to sink because they are designed as a honey-comb of cells, i.e. the various tanks. This does not only make their hulls very strong, but also bouyant as no torpedo or even combination of torpedoes - is likely to compromise all of that bouyancy at once. Besides, the crude/oil/gasoline whatever - the ship carries is also lighter than water and thus delays the ships sinking. The 'quickest sinkings' recorded in the war, were of ammunition/explosives-laden ships where a torpedo/mine hit - triggered a secondary detonation of the ship's cargo or parts thereof. That's when the news carried the ominous 'it is feared there was heavy loss of life'. In clear text - that meant 'we don't think anyone survived'. But I think - that even if if was a windy day and I had to seek cover somewhere to light a fag - I would've seen the ship go down.

Well, I guess it could be possible for a ship to sink that fast (at least assuming he didn't succeed to light his cigarette right away) if, as mentioned here, torpedo managed to explode under the ship.

If U-boat commander was very lucky this could have caused ship to break itself when water would no longer be supporting hull of the ship (explosion driving water away from area) and heavy ship would rip itself open.

Some scientists are actually assuming that bit similar action might be reason for reputation of Bermuda triangle. If there was considerable amount of gas in the oceanfloor which would succeed to surface as huge bubbles every now and then they could easily cause ship to sink. It's one theory they have come up with.
Top

Matt L wrote:I know at some point someone realized that the water displaced by a torpedo warhead detonation was FAR more devestating than a direct impact, so magnetic detonators were designed so that a torpedo would detonate as it passed under a ship. Modern torpedoes, which probably don't have significantly larger warheads, can crack a ship in HALF. I know there were a lot of problems with these detonators and that they were withdrawn from service in 1940, not to reappear until 1943.

Does anyone know when these magnetic detonators were first used by the German Navy?

If my memory serves me right the magnetic pistol was developed *** already during 1920s, and first examples were handed to German Navy in turn of 20s / 30s. Mass-production was though later from mid-30s on...

Available for combat use (with all of it's shortcomings) from the first day of WW2.

Thanks Mark - it's much appreciated.

David Brown wrote: ↑
06 Dec 2003 00:03
Does anyone know when these magnetic detonators were first used by the German Navy?

The first german influencepistol (magnetic) was developed in 1917. It was crude and never used operationally as far as I can tell. It was a separate device mounted in front of an existing mechanical pistol. It would fire off a bolt backwards when activated, which in turn activated the mechanical pistol.

The first practically implemented magnetic pistol was the Pi G7A-MZ introduced in 1934. It had severe shortcomings as it wasn't possible to calibrate it properly for the natural magnetic fields in the northern hemisphere and narrow fiords in particular (it contributed greatly to the various types of malfunctions comprising the german "torpedokrise" of 1939-1941).
Top

Trommelfeuer wrote: ↑
22 Apr 2003 19:31
Here's an interesting example for a german "manned torpedo", the "Neger":
This actually was a manned torpedo with a war-head torpedo underneath.
(..they were not suicide weapons like the japanes Kaitan...) 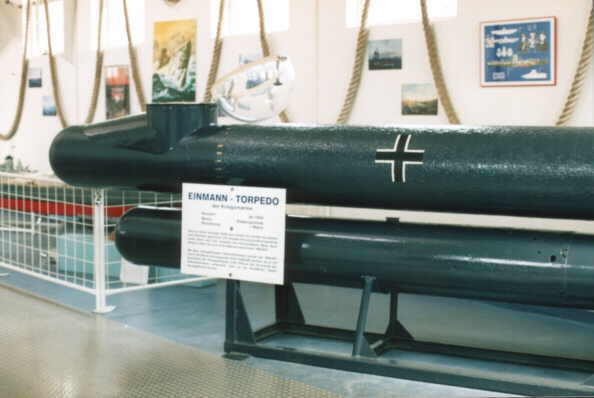 While the Neger (in a number of variants) wasn't supposed to be a suicide weapon it was in fact pretty much that. Crew losses were nearly 100% in operational use, amounting to it basically being suicidal to man one.
Top

Trommelfeuer wrote:Here's an interesting example for a german "manned torpedo", the "Neger":
This actually was a manned torpedo with a war-head torpedo underneath.

That contraption on display at Speyer is the result of someone's creative abilities. It's pure fantasy, and the underslung torpedo is just as irrelevant, being a WW1 G/7.

T. A. Gardner wrote:While the Neger (in a number of variants) wasn't supposed to be a suicide weapon it was in fact pretty much that. Crew losses were nearly 100% in operational use, amounting to it basically being suicidal to man one.