Discussions on the equipment used by the Axis forces, apart from the things covered in the other sections. Hosted by Juha Tompuri
8 posts • Page 1 of 1

Hello
After hours of looking for a place where someone could have a clue as to what this engine was used for or what it was a part of I rembered about this forum which for some reason wasn't the first site that popped into my mind since I usually visit it to identify equipment.

Anyway, what I'm trying to identify today is an engine represented in a diagram that I found in a rather unusual location; An abandoned military base in southern Spain used for storing naval ordnance and german naval mines which were stored after the war. The diagram is in very bad condition but at least most of the information is visible. I am mainly interested in finding out the model of the engine and where it could have been used, here are the images: 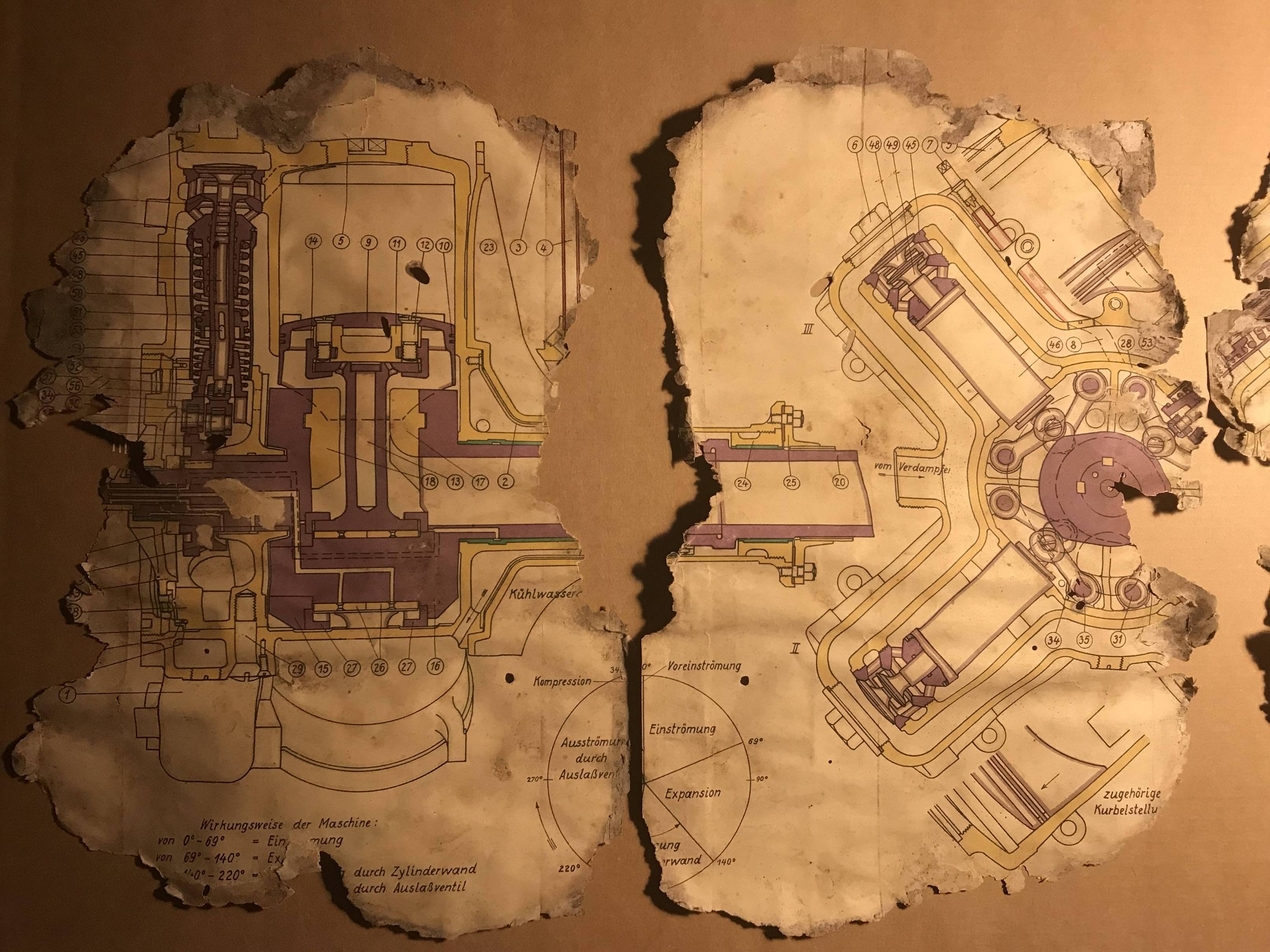 This is the second half, showing the cylinders and the list of all the components of the engine 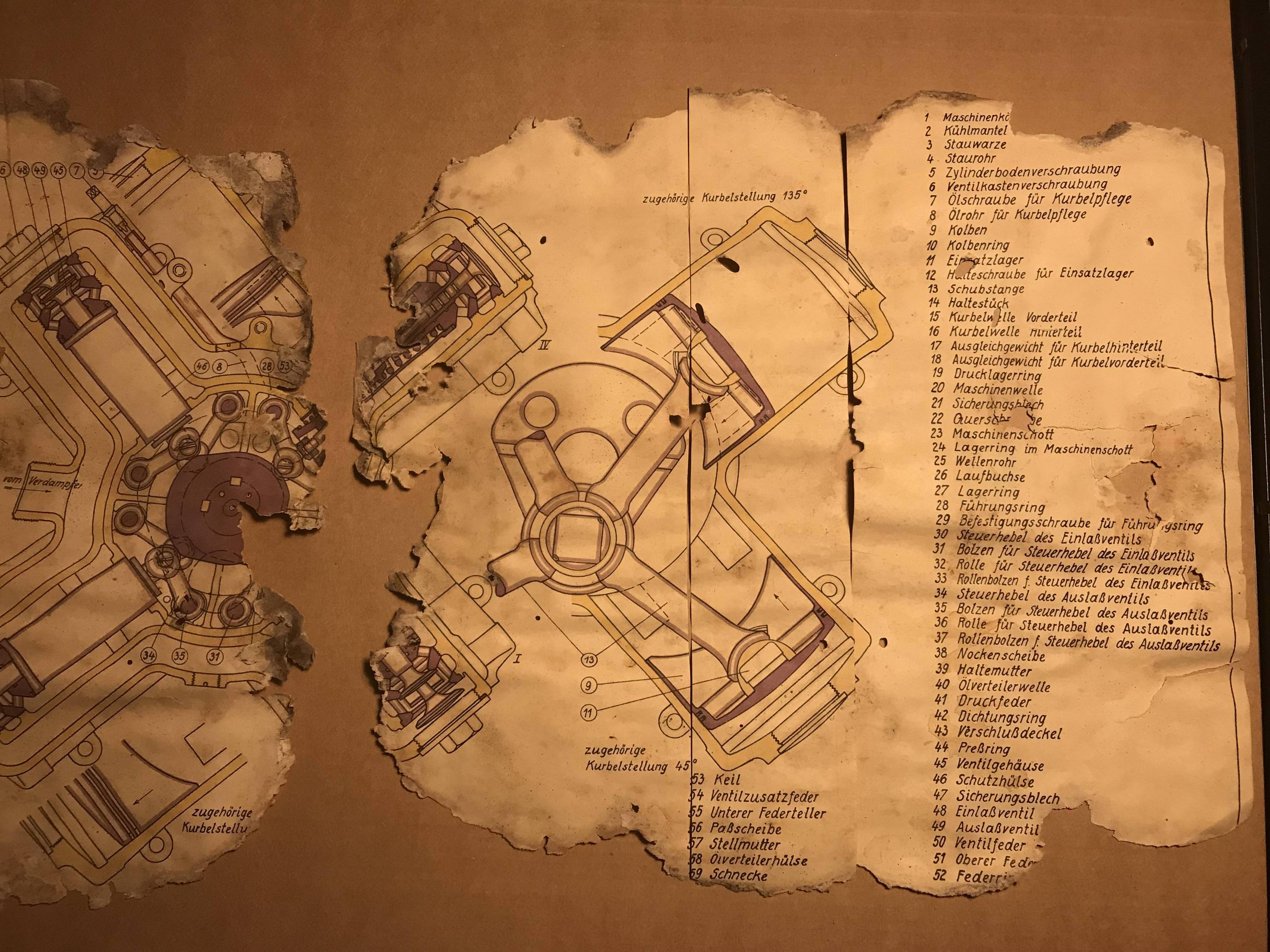 And here is the entire diagram showing the engine 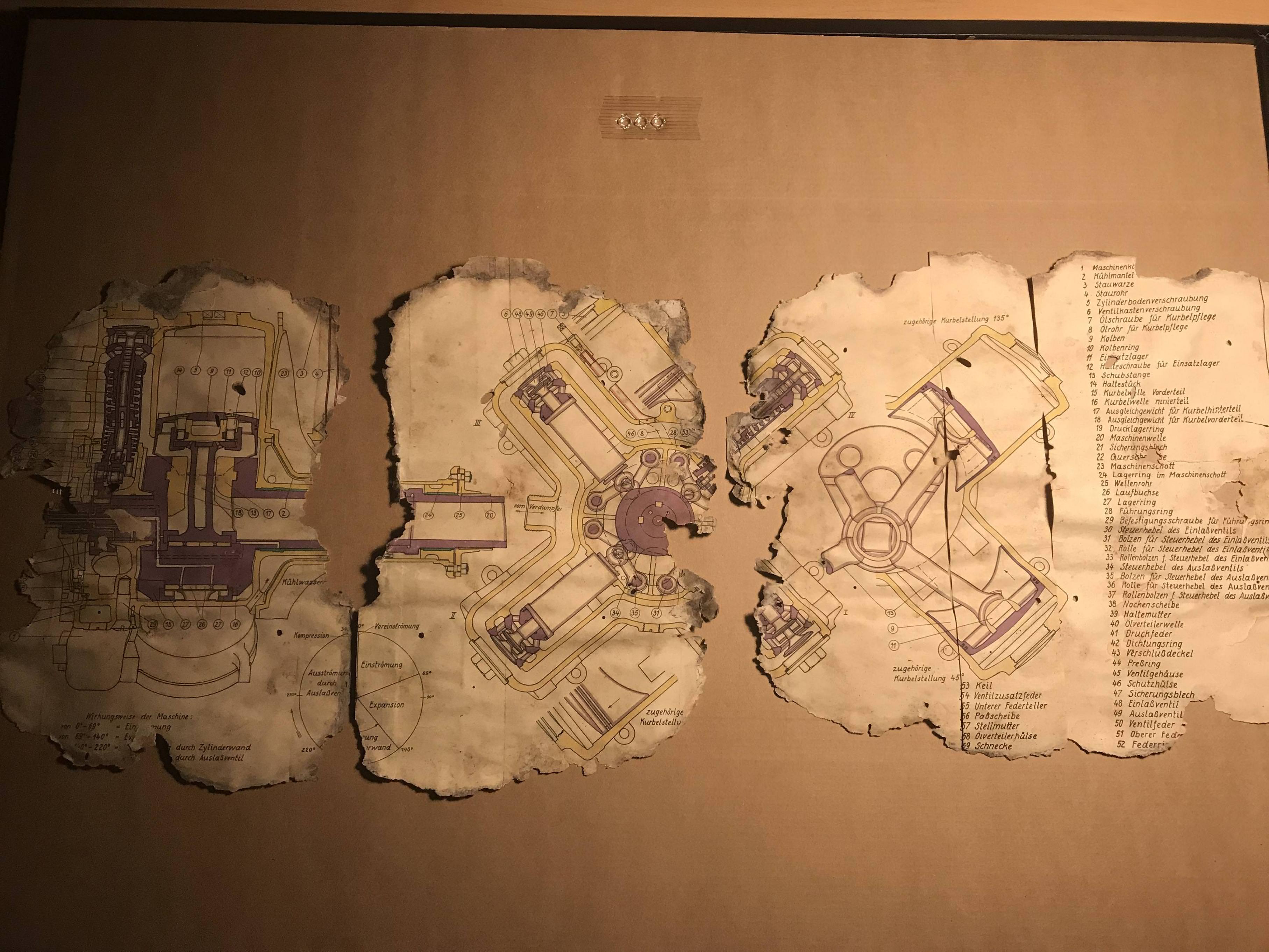 I am really thankful to anyone who looks into this and provides any kind of information about it.
Top

It's a torpedo engine - the german G7a(TI).
It differs in minor details from the drawings in M.Dv.Nr. 358A Torpedo G7a Zeichnungen from 1941, so it probably shows a later version (the G7a engine went through a couple of redesigns since it's first version around 1930).

Spain received both G7a(TI) and G7e(TIII) from Germany in 1943 as a result of Program Bär (it also included supplies of other types of weapons).

I have attached a couple of drawings from the spanish G7a-manual, showing a very similar engine-version as your drawings (taken from Description del Torpedo 'G-7a' (Láminas), 1946).
You do not have the required permissions to view the files attached to this post.
Top

Wow, thank you very much, I knew this was the right place to ask. In addition to the diagram of the engine there also are diagrams of various different machines but they are in worse conditions, I suppose these are also components of the torpedo but some info about them would be appreciated. If you are interested I can post all the diagrams 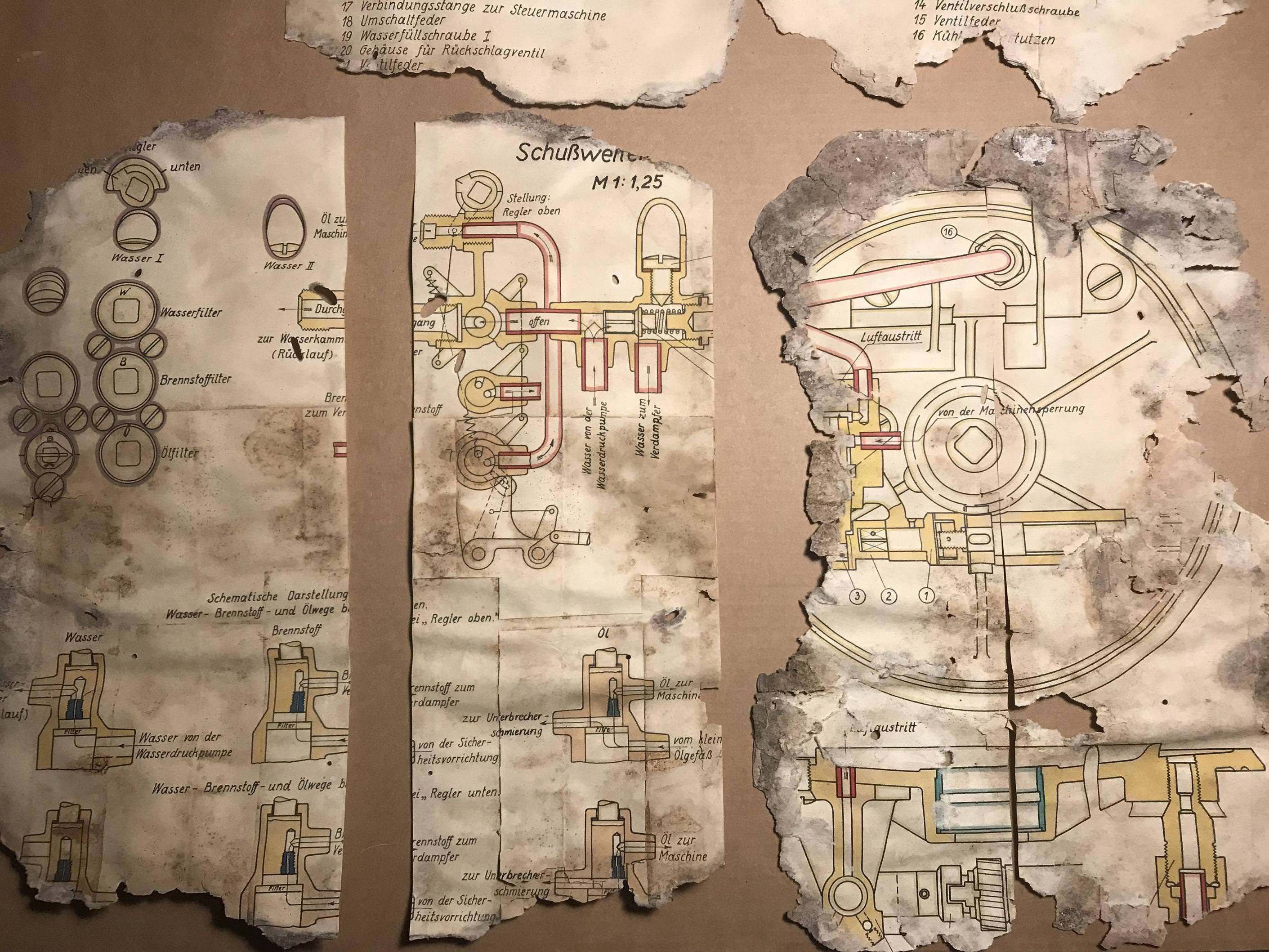 VC54002 wrote:I suppose these are also components of the torpedo but some info about them would be appreciated

I'd be very interested to see all the drawings, as they differ from other drawings found in german manuals (I suspect these probably have been used for educational purposes, hence the colours...).

Ideally, it would be great to have proper highres scans though if that's possible? I'd be happy to trade you scans of the spanish manuals in return.
You do not have the required permissions to view the files attached to this post.
Top

Natter wrote:Ideally, it would be great to have proper highres scans though if that's possible? I'd be happy to trade you scans of the spanish manuals in return.

Yes, I've already been working on scanning the diagrams and I should be done with them in about 2-3 days. When I'm done scanning them I will contact you and send you everything. Also I would be very interested to take a look at the spanish manual or any other information you have since I've just started reading about the history of these weapons and it's really fascinating, we can talk about that when I contact you after I finish with scanning.

By the end of this month I will most likely go back to the place where I found the diagrams and I will focus on searching every corner of the offices for more documents, the entire ceiling collapsed over everything that was left in there which makes things hard to find but if I find something interesting I will make sure to contact you.
Top

Based on additional information/fragments of drawings found and provided by VC54002 lately, it's clear that these drawings are of the german pre-WW2 G7v / G7v* torpedo.

Very interesting, as this has unfolded some information regarding spanish involvement in the development of the G7a that has slipped by me before.

It turns out that the spanish firm Echevarrieta was establishing a torpedofactory in Cadiz in 1929, partly funded by the spanish navy. I haven't got the full story yet, but it seems like they were planning to license-build german torpedoes and requested a "good and well-proven" design for this purpose. Germany offered the G7v, but the spanish navy was demanding a 21" (53,34cm) torpedo - being the new "standard" established internationally at this time.
This initiated the development of a new 21" torpedo, were Echevarrieta wanted to take the lead, planning to make 5 prototypes themselves supported by german torpedoexperts. As it happens, the firm went bankrupt before the project was launched, and germany ended up doing the development themselves, leading up to the final G7a design in 1933 and the fielding (operational status) of the G7a(TI) with Kriegsmarine in 1934.

The new torpedo saw widespread service with Kriegsmarine through WW2 (with some redesigns, especially following the german "torpedokrise" in 1939-41), being their main naval torpedo and the only torpedo used by the surfacevessels, as well as serving along the numerous G7e variants on the U-boote.
It was also used a lot post-WW2, with Norway being the last operator (as far as I know) until 1999, when the coastal artillery phased out the T1 mod 1 (G7a(TI) modified with wireguidance in the mid 1960's).

The G7v also saw some service during WW2: I don't have the complete picture, but it's well documented that it was used in "Torpedobatterie Narvik"; "Lilian" and "Drot" operating as a "schwimmende batterie" in the Ofotfiord until the two shore batteries at Porsöy and Korshavn were established in 1941 with twin 50cm tubes from the vessels. In 1944 the two shore-batteries were equipped with 53,34cm drillingrohrsätze and G7a(TI) torpedoes, upon the before mentioned vessels got their twin tubes back, and continued serving as floating batteries with the G7v torpedo, protecting the major german naval bases up north for the remaining time of the war (like with Tirpitz in Alta/Kåfiord).

Although being different in appearance (for instance, the G7v - virtually identical to all the G/7 variants - had a woolwich tail and the G7a had a whitehead-tail), the G7a incorporated several internal mechanisms/parts from the G7v, including the engine (which explains the similarities in the drawings found: These are among the first technical documents I have seen of the G7v, hence my mistake in the initial ID

).
You do not have the required permissions to view the files attached to this post.
Last edited by Natter on 03 Oct 2018 16:00, edited 5 times in total.
Top


Natter wrote:The G7v also saw some service during WW2: I don't have the complete picture, but it's well documented that it was used in "Torpedobatterie Narvik"

I have scanned this "Torpedobuch" (ie the protocol following each torpedo where all maintenance routines, exersice shots, transfers between units/arsenals etc were documented).
The record shows this particular torpedo - produced in 1927 - was serving with "Torpedobatterie Narvik", on "Drot" (before the torpedo was put into action as a "gefechtstorpedo" in 1939, it had already been used for 179 exersice-shots).
You do not have the required permissions to view the files attached to this post.
Top
8 posts • Page 1 of 1