Discussions on the equipment used by the Axis forces, apart from the things covered in the other sections. Hosted by Juha Tompuri
17 posts

While doing research on remote-controlled, remotely detonated, land mines (or land torpedos) like the Véhicule Kegresse, Véhicule Pommellet, Metropolitan-Vickers Mobile Land Mine, Jeffrey Land Torpedo and the Sdkfz 302/303/304, I came across the following image of an exhibit in Kubinka Tank Museum. It's clearly a Goliath, however, when compared to the other Goliath behind it, the foreground version seems to have additional equipment--and what appears to be an antenna. Could this be a radio-controlled variety of the Goliath? I found a page from the museum's website that features the same image, yet the information attached mentions nothing of note. Thoughts? Opinions? 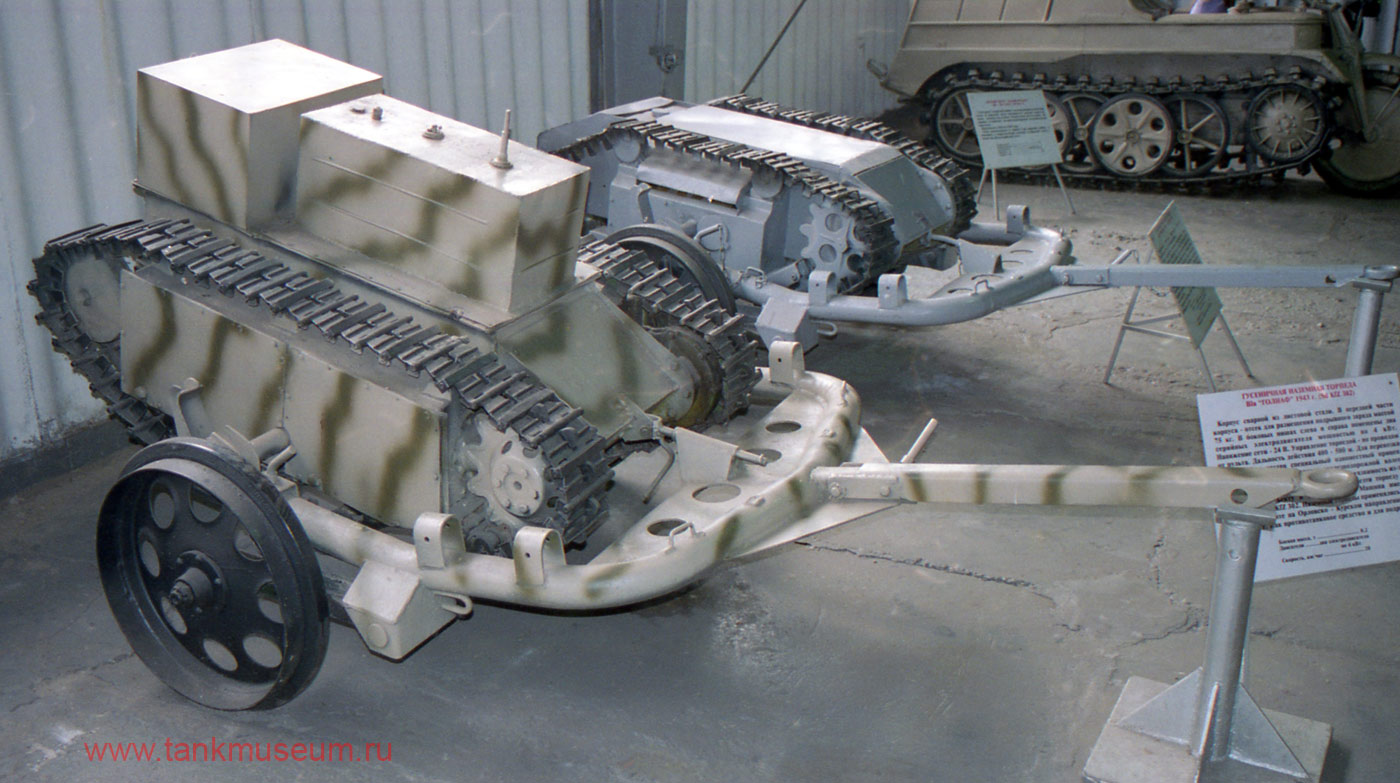 Here is another angle of the same exhibit found on this link: https://henk.fox3000.com/kubinka.htm

Go to this link, then surf away at the many different pages, links to other sites, etc.Will take you a whole day and evening Also, use yuor searcg engine of choice (BING) type in various terms of this weapon click on images enjoy https://www.bing.com/search?FORM=U528DF ... an+goliath
Top

Mark in Cleveland, Tn. wrote: ↑
09 Apr 2020 18:45
Go to this link, then surf away at the many different pages, links to other sites, etc.Will take you a whole day and evening Also, use yuor searcg engine of choice (BING) type in various terms of this weapon click on images enjoy https://www.bing.com/search?FORM=U528DF ... an+goliath

Forgive me, but I am confused greatly by your comment. I know what a Goliath is. It is wire controlled, remotely, with a controller. I mentioned it in my first post. I am talking about a possible *radio* controlled variety, i.e. without a wire, and wanted outside opinions on what other users thought on the Goliath pictured, and what the attachments could be. This is a legitimate post that I thought could stimulate some discussion. If you are making fun of me, that is not called for.

Oh my fellow member, you need to relax.I posted the licks so yuo can see and find the many varients and the history of these varients.Please sit back, make a very strong cup or 2 of coffee, then chill out exploring the lkinks I provided. There are pics of many many varients and the backgrounbd of these. I also think there is a dedicated web site for German WEapons that were * different* Happy Searching my fellow member
Top

I understand Mark. Phew. Sorry about that overreaction. I could not tell your tone. It seriously looked like you were making a joke at my expense. Do know I am still not sure why you would suggest the search still... I am aware of the Sdkfz 302, its brothers Sdkfz 303a and 303b, Sdkfz 304 Springer and even the Sdkfz 300 Mineraumwagen (though those were used for mine clearing and not demolition). So, that being said, I came here hoping someone else had an idea because I have already looked for this mystery variant I posted. It appears the Kubinka specimen may be the only one. Again, forgive the misunderstanding.
There are three sorts of people; those who are alive, those who are dead, and those who are at sea.
Top

Agree and all is cool. I find myseld when I am searching for a varient or some sort of one off weapon, piece of equiopment, by doing a search on the various search engines and then lookung at the Images, I find out what I am searching for.Then what I do is search the image provided for the site t camer from,
Lets oth look at all those images on the links I gave you, bet we find what you are searching for somewqhere deep in the pages.
Top

Didnt the post war Czech.military use a model of these? (copioed) like they did with other weapons as like the Spanish with the copied Me 109?
Top

Hmm, I have another thought about this exhibit in this museum.. They might just be full of crap with this display... Not the first time any museum, big small, Huge Smithsonian, Louve,Imperial War Museum, both Canada and UK. had an exhibit of items-re;lics that they had no absulute idea what they had, and if you look closely, the model you want info on seems added on to enhance as the paint job is of course modern add on.
My idea might be correct, might not be..
Top

Note that as far as I can tell, the Goliath is the one in the front (camouflage-paint), and the Grabenwolf is the in the back (grey). So, still no explanation of the two contraptions mounted on top of the Goliath... (post-war russian alternation, or a german prototype never fielded?)
Top

Hi again Mark. Funny you mention it, because I use the very same method. I typically go through Yandex when something is hard to find on Google. That site has gifted me a deluge of rare photos and high-quality versions of other photos floating around Google that are either small, blurry, watermarked or otherwise not attractive for an archiver like myself. So that being said, I completely understand. In this case, I made this post since those attempts I made at finding more on this mystery Goliath were unsuccessful. To be honest, most posts I make as of late are things I cannot find information on. This forum and others like it are a treasure for researchers who have nowhere else to turn--though I hope I do not annoy any users by asking so many questions.

I even own a plethora of books thanks to suggestions on posts, not my own I have read over the years.

Anyway, on your theory, considering this exhibit is in Kubinka, it's entirely a possibility this model of Goliath is either an elaborate fake or an actual model (perhaps experimental) that was actually captured in the war's end. My reasoning for the latter is the number of strange experimental weapons and equipment captured by the Red Army. The two examples I can most clearly think of are the 15-barrel Nebelwerfer and the Kugelpanzer, both of which are without documentation as to their origin, and both of which are in Russian museums. Furthermore, while the Maus is a well-known tank, it too is a one of a kind, and it too is in a Russian museum.
There are three sorts of people; those who are alive, those who are dead, and those who are at sea.
Top

Hi Natter.
Thank you for the information. Most intriguing. I did not know the Sdkfz 303 was called Grabenwolf. Huh. I always thought both were named Goliath. Regarding the addition, I am equally perplexed.
There are three sorts of people; those who are alive, those who are dead, and those who are at sea.
Top

It seems Trenkle is the only source using the name "Grabenwolf". All my other books (Hahn, Lusar, Jaugitz) use "Goliath" for both versions. It seems there might have been several variants, but the two main versions are also referred to by Lusar as Ladungsträger "Goliath B-I-A" (ottoengine), and Ladungsträger "Goliath B-I-B" (electroengine).
I don't know what's correct, but by default I think Trenkle is a reliable source on anything radio-related. Both him (and Hahn) actually had relevant experience during WW2.
Top

I will look into this Trenkle fellow (and the other authors you mention). This Kubinka model is certainly interesting, and I hope there is something to find on it. I am sure the Ladungsträger designation is likely correct, yet the Sdkfz terminology just sounds better to me. Regarding the ottoengine, off-topic, but I am curious, have you heard anything regarding a V-engine? I have a photo of it, but nothing else except a few technical details I dug up. Probably an experimental model that never saw field service.
There are three sorts of people; those who are alive, those who are dead, and those who are at sea.
Top

The Goliaths in the Kubinka museum are to be taken with a grain of salt.

in fact the 303 they have there has been "restored" and does not look like it originaly did.

the one with the strange boxes on top seems very strange indeed.

In all my literature I only found two references for a radio controlled goliath:

"In 1943 a prototype of a radio-controlled light demolition-charge carrier was completed. It was a Sd.Kfz. 302 with a gasoline engine that had been developed by the 1./Panzer-Versuch- und Ersatz-Abteilung 300. The use of a radio receiver installation in a light demolition-charge carrier proved too costly, however, and the project was not pursued."

Second reference: Waffenrevue 8 März 1973 - Waffen-Lexikon 1810-100-1 Page 1268: Apparently at the end of the war there could have been a version that was radio-controlled. But the author didn't have any sources on that apart from rumours, so therefore he is questioning its existence.
Top

The following link claims this mysterious Kubinka model to be that of the V-engine, V-motor variety. Interesting.