Discussions on the equipment used by the Axis forces, apart from the things covered in the other sections. Hosted by Juha Tompuri
1231 posts

What was the method the Germans used to build that underground missile silo?

What supporting facilities did the silo have?

Are there remains of this silo today? If not, why not?
Top

I can show you a photo its the exact same system used by Fiebinger in the USA, in China they still use the same stystem according to sattelite photos.
Top

Here the photo of a 1960s USSR silo that still follows the basic design of the German Polte 2 construction Prototype by Fiebinger company Vienna and Mako works Arnstadt:

Basicly a steel tube in a concrete bed: 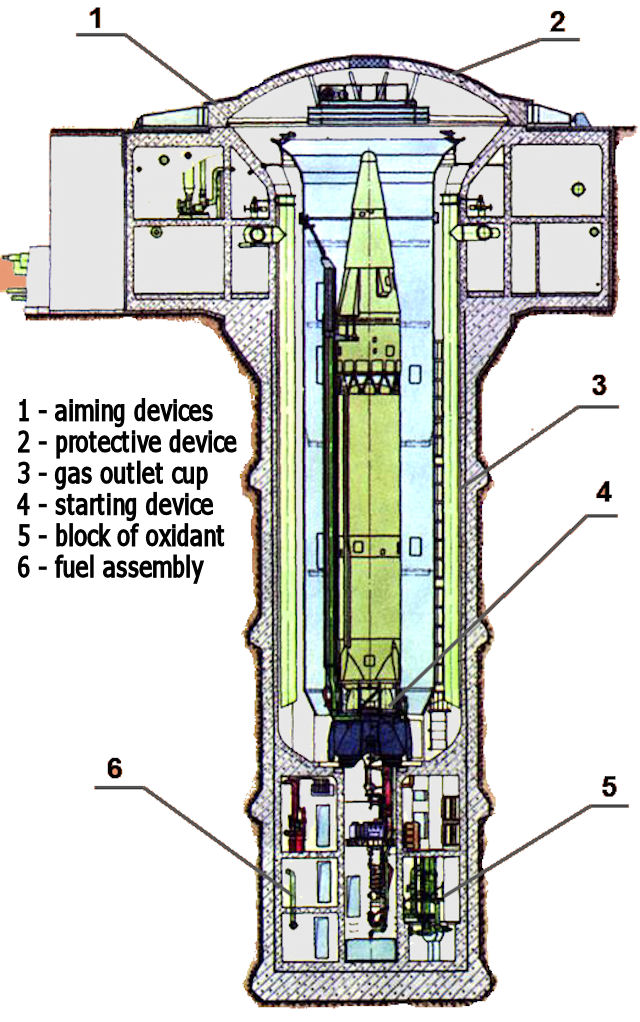 Here a picture of 1944 construction phase of the Polte 2 ICBM silo:

Here a photo after the Russians removed the steel tube and cooling tower the entire silo system was transported to Leningrad for study and copy, all later soviet silos also base on the old german design, the americans paperclipped Mr Fiebinger himself the architect from vienna who planned the entire base Fiebinger, also designed all early US ICBM silos:

Here the soviet ICBM lid system, its an evolution of the german system, the USA modified ( in their minuteman bases) the door to a sliding mechanism.
The soviets kept the "Submarine door" design.
Here an old soviet ICBM Silo in Ukraine: Here you can see that the surface bunkers on 1950s soviet and US bases still looked like the ones on the german Polte 2 airpicture...
Except that the first ICBMS of Russia and USA were launched from Surface the entire infrastructure looked the same, the second generation of ICBMS in USA and USSR were launched from underground silos copied from the Germans or planned by Fiebinger

Schlappgug wrote: ↑
08 Apr 2022 22:55
I can show you a photo its the exact same system used by Fiebinger in the USA, in China they still use the same stystem according to sattelite photos.

Irrelevant. Show us the architectural drawings and designs for these the Germans produced. These are available for a veritable plethora of other structures down to small bunkers. There'd be some or all of the design of this launch site available if it were even started, let alone built. 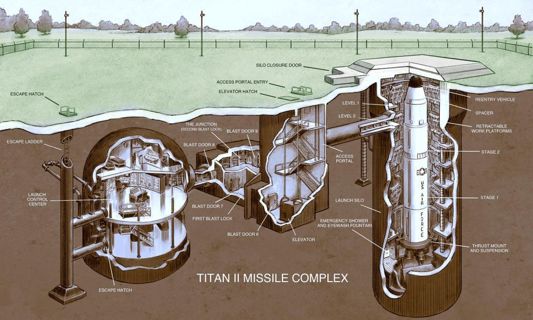 Also, what method did the Germans use to construct this site? Did they mine and then build within the mined area? Did they do cut and fill like the US? How did they build it? Why aren't there aerial reconnaissance photos showing this construction?

US cut and fill method.
Top

Really?! I don't think so. An ICBM silo isn't a small project. It's a pretty big one. The excavation alone would be obvious. Add in the cement plant necessary, etc., and it's really obvious.

This is the set up the Germans used for pouring a major foundation for an Atlantic Wall bunker for a large gun. An ICBM silo dwarfs that. 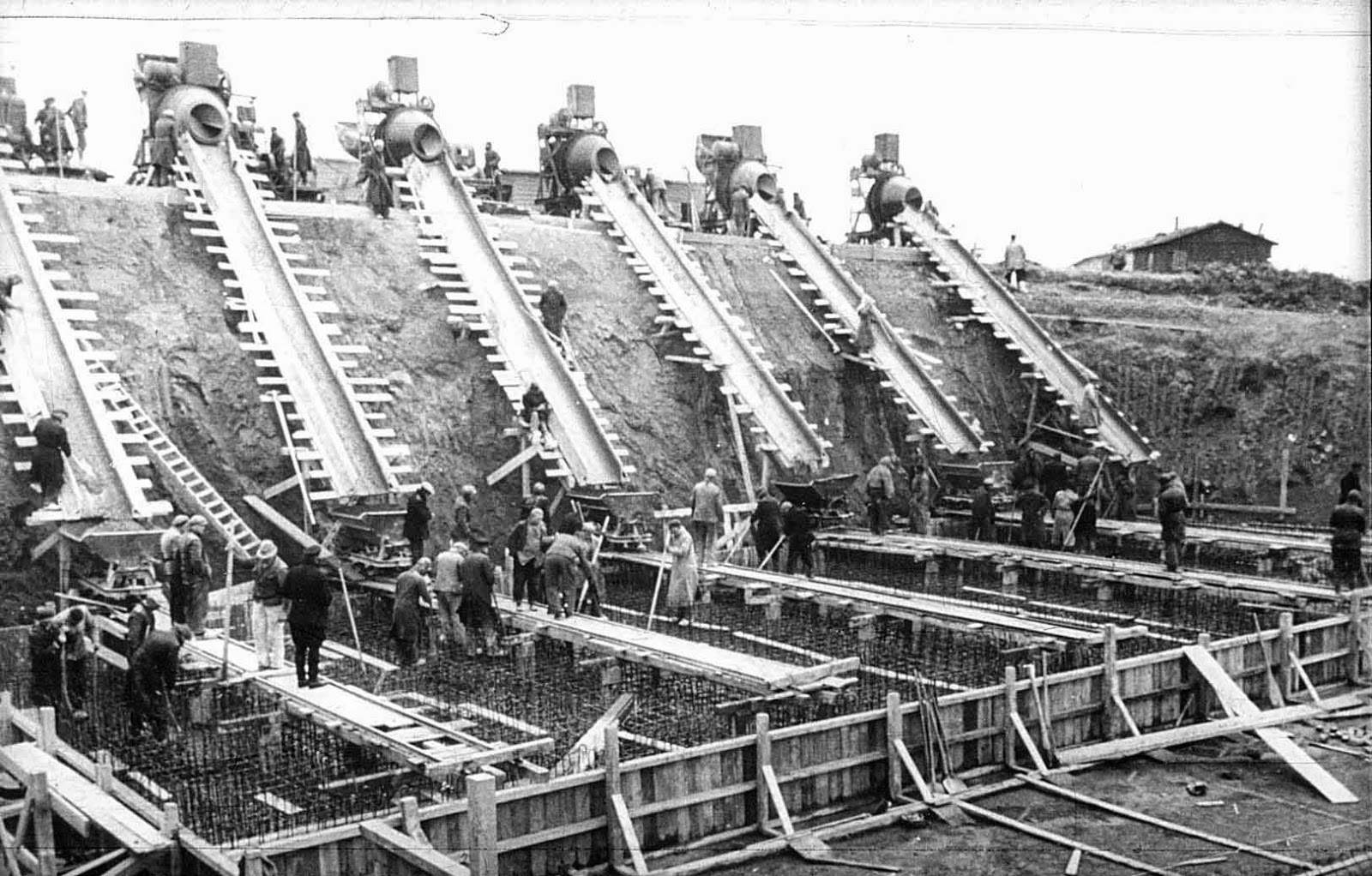 A German cut and fill operation on the Atlantic Wall

Do you have anything other than some Allied aerial photos to give as evidence that there was some major construction on this site that could be an ICBM silo? Is anything there today that could confirm it? If not, why not?

You want us to believe that there's no remaining evidence apparently of these sites even though this thread shows how insane that position is. Why not peruse the 80 pages of it. It makes your claims on this look insanely ridiculous.

The V-101... What was the fuel? Liquid or solid? What specific fuel type was being used in it? Was it LOX + alcohol like the V2? Was it a dyglycol variant that was the common German solid fuel? What was used?
Top

You posted, "Here you can see for the first time the nuclear test area of Ohrdruf shortly after the Diebner test. This test took place at 04.03.1945 21:30"

You then produced a lot of entirely circumstantial material that doesn't in any way support the above claim.

This should be very simple to sort out. If there was such a nuclear explosion, it will necessarily have left a considerable fall out imprint to this day. Simply walking the site with a commercially available geiger counter should easily confirm it. Yet nobody seems to have done so!

Instead we get all this circumstantial archival material that tells us what we already know - that the Germans had various advanced rocket programmes and a significant nuclear weapons programme in development.

What none of it tells us is that there was any German atomic test.

V101 used solid fuel, developed by Dr. Teichmann.
They also converted some V2 to the solid fuel type.
Polte 2 had 2 silos (you can even see the smaller with an open lid) the smaller (nearby the larger one) was for solid fuel powered V2 the larger silo for the 30 meter tall ICBM V101 (V4) 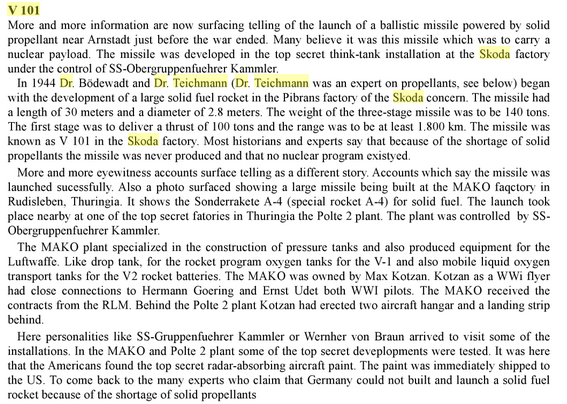 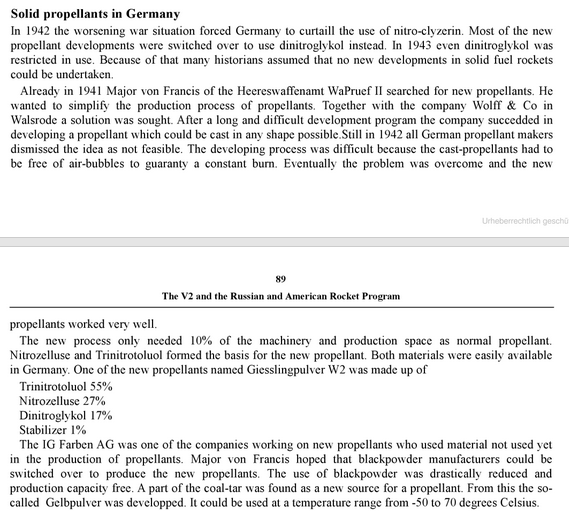 I looked in vain for a single source in your last post and found none. Why not?

You do realize that a simple double base solid fuel rocket propellant like the ones described above completely lack the specific impulse capacity to lift an ICBM-type rocket don't you? Even a much better propellant such as GALCIT 53 significantly out performs those, and unlike double based propellants, GALCIT 53 is castable. Used with the designs that Allegany Ballistics Laboratory came up with shortly after the war ended for the best cross sections for sustained burn and maximum thrust, these would have outperformed obsolescent double base rocket fuels by exponential amounts. These are still is not capable of use for lifting an ICBM on a sustained burn.
In fact, double based rocket fuels would have required numerous smaller charges each with an exhaust nozzle and resulted in an uneven burn of the propellant. This was an ongoing issue with these when used as booster charges in multiple packs. Everybody, the British, Germans, US, Russians, all had this issue with multiple double base booster charges. Using similar propellants for an ICBM is ludicrous.

It is beyond ludicrous to claim that somehow the Germans--or some Czech engineers--managed to solve all these issues and use double base rocket fuels to successfully launch an ICBM on a polar trajectory test flight. I also find the claim of "radio control" to be equally suspect. I doubt anyone can produce technical details of how this system worked, let alone any proof one existed.
Top
1231 posts