Best portrait of a german soldier on a movie

Seriously, seriously under rated that role!

He deserved an Oscar but the movie didn't get much recognition.
Top

I think Fiennes is IT!!!
And, it seems NO ONE is mentioning one of my faves: Marlon Brando in Young Lions. Again, not a "Nazi", a soldier. Great cinematography and locations too I think.
Top

I saw Escape from sobibor a few days ago and there were some really convincing SS members in that movie. Especially the one who speaks thouhg a speaker/phone when one of the first traines arrives.
They aren't soldiers but also really convincing germans
Top

All of the actors that have been listed so far have given fantastic portrayals, my personal favorites having been Maximillian Schell and Jurgen Priess, but this list is missing the following two;

GUNTHER MEISSNER as the train depot SS Colonel in "Is Paris Burning?"

I think you mean either Jürgen Prochnow or Wolfgang Preiss?
Top

I stand corrected; Wolfgang Priess. I envy him his film career and wish I was so lucky to get to be casted as either an officer or a General in practically every WWII film ever made.

Apologies for (1) happening upon this thread so late, and (2) this trivia!

British members may remember Mel Smith and Griff Rhys-Jones' Alas Smith & Jones series of comedy sketch shows on the BBC during the 1980s and 1990s (and perhaps a few overseas members will, too). One of the later series featured the following sketch, concerning the stereotyping of German generals in many a 1950-1970s British and Hollywood war film. All in heavy 'stage' German accents - of course!

[Setting: a Nazi General's fine office. General Gruber (Mel Smith) is listening to classical music while being fitted for a new uniform by a tailor, with a beautiful blond attending, draped around his shoulders]

[there is a knock on the door]

Gruber: I am General Gruber. As you can see, I am the Nazi general who is always being fitted for a new uniform. I enjoy the company of beautiful women while listening to classical music with my eyes shut. [he does so]

Gruber: I am also the Nazi general who says "You see captain, we are not all barbarians."

Schtum: I am Schtum, the Nazi general with a mean streak to my character. You will find that I am always removing my gloves. [he does] So. I disapprove of other generals being measured for new uniforms. And I am always the one who is winding up the telephone [he does] and shouting "Get me the Führer!"

von Dunkerl: [entering, long black leather coat, facial tic, sinister] Gentlemen, allow me to introduce myself. General von Dunkel. I am the slightly pervy general. And I may also be a little bit GAY. Heil Hitler! [salutes] As you can see I have a twitch. And I am always dabbing my mouth with a handkerchief because I have no lips.

Kessler: [entering, cap at jaunty angle, Rommelesque] Good evening gentlemen, I am Kessler. I am the easy-going general who does not need to salute properly.

Kessler: [barely salutes] Ja, ja... You will notice my ludicrous scar, and my obvious limp. I also have spent many happy years in London before the War.

Kessler: The reason for my uniform being a slightly different colour to yours is never explained.

Matthau (Griff Rhys-Jones): [entering, limping] General. General Matthau. Forgive my late arrival, but as you can see I have a rather obvious-

Kessler: [clearing his throat] No, I am afraid the limp is me, I'm afraid.

Matthau: [stops limping] But of course I am a little bit GAY, and I dab my lips with a-

von Dunkerl: I think you will find that is me, my friend.

Matthau: [throws away handkerchief] In which case I must immediately wind up the telephone and say ...

Schtum: [shouting in the telephone] Get me the Führer!

Matthau: At least I still enjoy the company of beautiful women and listening to the grammophone, classical music [sees Gruber doing so] - ...with your eyes ...*shut*?

Matthau: You leave me with no choice! I am the Nazi general who is outwardly calm but subject to sudden [slams fist on table] and inexplicable *FITS OF TEMPER!!!*

Well there are many here i like too from the lists already said like jurgen prochnow in das boot,hardy kruger was good in the one that got away.In the eagle has landed thought michael caine did a good job as a german fallschirmjäger commander,also liked Sven-Bertil Taube as Capt. von Neustadt and Siegfried Rauch as Sgt Brandt and also rauch in the big red one as Schroeder (German sergeant).

Also Robert Duvall as Col. Max Radl was good,also liked oscar werner in decision before dawn too as Cpl. Karl Maurer,robert vaughan as Maj. Paul Krüger in bridge at remagen.And there many more out there too, just cant think of them now or they already have been said.
Top

The people mentioned above are memorable in their roles, but in my opinon many of them are just playing a stereotypical role or just mimicking a public persception of what a German military man was like and not a "real" German soldier with any real depth to their personality or character.

Having lived long enough to have seen many films from the all decades of the 20th century and having grown up watching them every weekend, another notable is Erich von Stroheim who appeared as Rommel in "Five Graves to Cairo" and Otto Preminger, the director, who appeared in "Stalag 17" as Colonel von Scherbach. 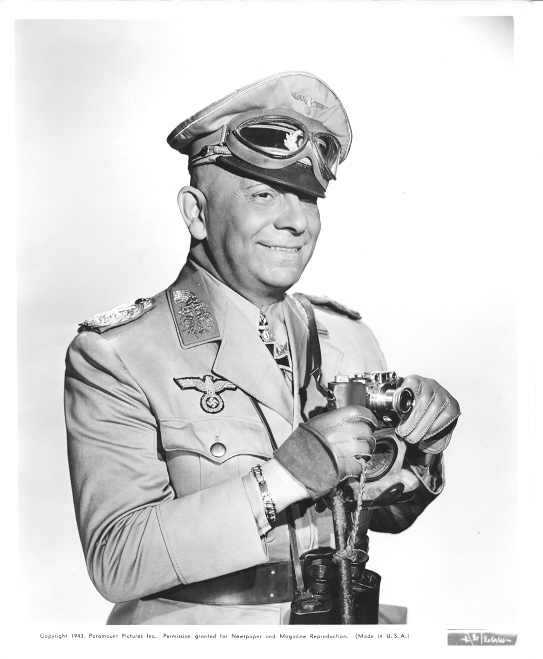 With that said, one man I've seen in many excellent war movies in the role of a German officer and doing so with great ease and without pretention is Wolfgang Preiss. He played the Major Herren in "The Train" opposite Burt Lancaster, and the German officer that takes over the POW train in "von Ryan's Express" starring Frank Sinatra. Preis also played a SS Major in the "The Cardinal" tv miniseries, Maj. Gen. Max Pemsel in "The Longest Day", Major Linkmann in the 1959 German film "Hunde wollt ihr ewig leben?" (Dogs, do you want to live forever?) which was remade into the 1993 film "Stalingrad", General Rommel in "Raid on Rommel", and "War and Rememberance" tv miniseries as General Walter von Brauchitsch as well as many other films and tv series including a single appearance in the 60's tv series "The Rat Patrol".

I think that a classic performance of a German officer by a non-German was James Mason in the role of Erwin Rommel in at least two films, "The Desert Fox" and "The Desert Rats". His performance was smooth and natural and not a comic book representation of a German commanding officer. He also played General Count von Klugermann, the husband of Bruno Stachel's (George Peppard) love interest Countess Kaeti von Klugermann (Ursula Andress) in "The Blue Max."

Karl Michael Vogler did a excellent job as the hard pressed Hauptmann Otto Heidemann, in "The Blue Max."

Ralph Fiennes portrayed Amon Geoth, the camp commander, in "Schindler's List" and did a excellent job. His portrayal of a murderous character was much convincing than that of Peter O'Toole in "Night of the Generals". I never quite bought into the premise of O'Toole as German officer in his films.

As for enlisted men or junior officers, I know someone or two out there are going to mention "Cross of Iron" and James Coburn as Rolf Steiner. Even though Coburn seemed to give it a good effort, I never really could ignore the horrible German accent he affected and the his stiff portryal of a disillusioned German soldier. It all seemed too scripted and predictable and Maximillian Schell's protrayal of the medal hungry officer was just lacking something to me.

The cast of "Stalingrad", made in 1993, was a much better "average german soldier" movie than "Cross of Iron" and more believable. I have never seen the two previous versions of this same movie that have been released since the end of WWII so I can't compare the 93 version to those.

"All Quiet on the Western Front" did a good job of presenting the German soldier of WWI. I've seen the early version made in the 1930s and the 1979 made for tv version with Richard Thomas and Ernest Borgnine. I tend to prefer the later version but I could never get past the sight of Thomas as main character, Paul Baumer, and kept seeing him as "John Boy" from "The Waltons". For me, Thomas is forever typecast in that role. Borgnine did a great job as the "old soldier", Stanislaus "Kat" Katczinsky, that took Baumer under his wing and later became his friend.

There are many films made in Germany by Germans which I haven't seen that probably do an admirable job or representing the lives of German soldiers. Two of these, "Das Boot" and "Stalingrad", managed to make it to the U.S.

These are my opinions. Your's may differ.
Top

After watching Das Boot one thing struck me. The sailors were depicted as crude and filthy, if good navy men. Now I suppose that rank-and-file the world over are exactly like that, especially during a losing war. But it made me realize that US soldiers in Hollywood movies are shown to be wholesome and squeaky-clean.
Top

I remember when Danish television showed Holocaust, i was sort of intrigued by the way the role of Eichmann, Himmler and Heydrich was played - describing them "almost human" in spite of their role in the film.:

Showed that there also was some sort of personality behind the frightening subject. As showed in another tread here with photos of Himmler as the loving father - they were also familymen to their own and those who were with them.

Scary and makes one think - right?

I remember when Danish television showed Holocaust, i was sort of intrigued by the way the role of Eichmann, Himmler and Heydrich was played - describing them "almost human" in spite of their role in the film.:

Showed that there also was some sort of personality behind the frightening subject. As showed in another tread here with photos of Himmler as the loving father - they were also familymen to their own and those who were with them.

Scary and makes one think - right?