Discussions on all aspects of the First World War not covered in the other sections. Hosted by Terry Duncan.
6 posts • Page 1 of 1

Coming from the Venetian plain, towards the Folgaria plateau, the first mountain is Monte Cimone di Tonezza; on the contrary, for the Italian army pressed in May 1916 by the Austrians, the Strafexpedition, that was the last step to hold on. The Austrians, after breaking the first Italian line in front of Passo Coe on the 15th, had conquered Mount Maronia, then Mount Maggio and, after the destruction of the Campomolon fort by the Italians in retreat, they were divided into two columns: one attacked the defense of the Borcola Pass with the intention of going up to the Pasubio and joining the column from Zugna, the other one headed towards Mount Cimone, manned by the soldiers of the 35th Italian Division. On May 24, 1916 the regiments nr. 14 and 59 of the Rainer Group, first-class alpine troops, attacked with the support of a strong concentration of artillery fire and for the Italians there was nothing to do: from the top they retired to Novegno and Pria Forà. By mid-June, the Italian counteroffensive had managed to recover most of the lost ground. The line ran more or less from the Coni di Zugna to Mount Corno, cut the Pasubio almost in the middle, was placed in the middle of Mount Cimone, climbed towards the recovered Monte Cengio, then continued towards Asiago, Mosciagh, Ortigara. Instead, the Austrians resisted until the end on the Monte Cimone di Tonezza. The Italian troops carried out a prudent approach tactic, already successfully tested in the Col di Lana: from the line closest to the enemy, in the afternoon our patrols left with sandbags and stones that came out in front of the enemy trenches, During the night these shelters were enlarged to the point of forming a dangerous outpost from which to carry a threat to the first enemy line. Thanks also to this approach method and the artillery patter, on July 24 the final attack was successful and Cimone returned to Italy; the attack, as well as from the military point of view, also constituted a mountaineering operation and the Val Leogra and the 154th Infantry correctly received the silver medal for military valor for the executed operation.

The Command of the 11th Austrian Army made it clear immediately that it was not possible to leave this important position to the enemy because he could move towards other conquests: Oberleutnant Mlaker and the Linz sapper group were commissioned to build a mining tunnel to blow up the Italian garrison. The officer decided that the tunnel should start from the old guardhouse, just 25 meters from the Italian position, but first it was necessary to connect it with walkways to the refuge areas and engineering stores. After ten days, the Austrians, after completing the preliminary work, attacked the rock towards the Italian garrison with two tunnels, one real and the other for a possible enemy counterattack. Given the relative proximity of the target, Austrian engineers simply built an 80x110 cm gallery, and on September 18, everything was ready to load the blasting chamber. The load, composed of 4,500 kg. of dynamite, 8,700 kg. of dynamon and 1,000 kg. of gunpowder, it was detonated at 5.45 in the morning of September 23: huge blocks of rock flew up and then fell and shattered on the ground. When the cloud of dust and smoke disappeared, it became clear that the profile of Mount Cimone had completely changed: instead of the single peak, there were now two separated by a crater 50 meters wide and 22 deep. In the destroyed caves and trenches, the infantry of the position composed of 10 officers and 1,118 soldiers of the Sele Brigade, of the 136th Zappatori Company of the 63rd Engineer Battalion, were buried. Not all Italians perished in the explosion. Meanwhile, in the shocked caverns, the wounded and the buried shouted for help, but no one under the artillery fire dared to venture into their rescue. On September 25, the Austrians sent a parliamentarian to the Italian Command to agree on a truce for the recovery of the dead and wounded, but he was rejected because he feared it would actually serve to send supplies. The last cries of the buried ceased in early October.

This is the story in the regiment's war diary: "Shortly before 06:00 hours, the enemy blows two powerful mines, drilling and crushing our trenches at the summit of Cimone (Pt 1230) where, a few minutes ago, the I . / 219th gave the change to a battalion of the "Novara" and the 259th Alpini Company. All access to the post is upset, the 1st, 2nd and 4th companies of the 219 were annihilated by the great explosion: the survivors ascend to two officers and twenty-two others ranks, while from Pt 1217 the adversary advances along the thin crest also impracticable by the explosion, but the few survivors of the three companies, gathered on the east side of the position, they fight rabidly with the enemy for the summit entrusted to them. But the number of attackers forces to give in to the small nucleus of heroic defenders who, also threatened by the western side, are forced to withdraw, not without having inflicted great losses on the Austrians. " 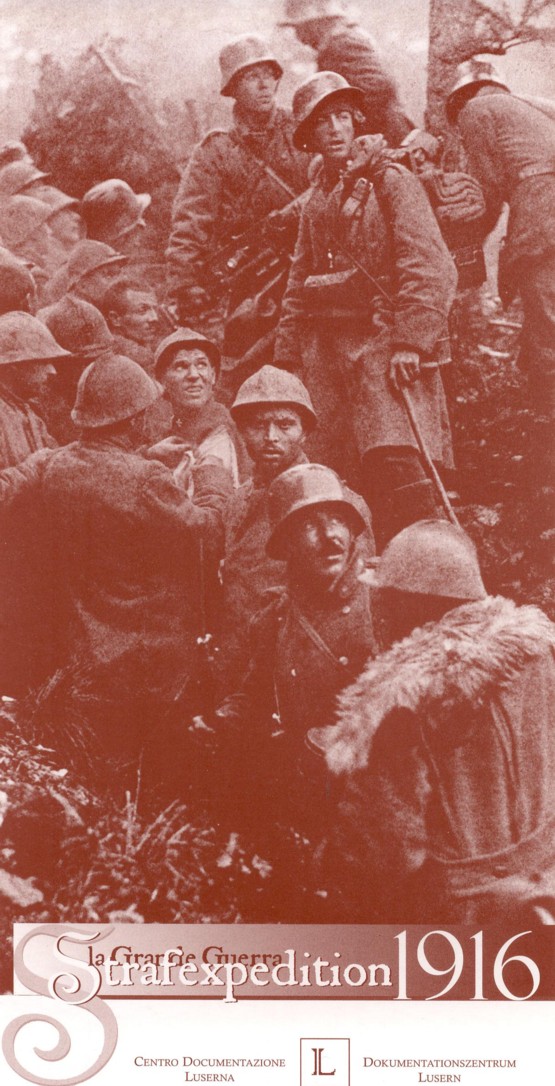 It had always been Conrad's plan, in case of a war of Austro-Hungary against Italy, to advance with strong forces from the heights of Folgaria-Lavarone on Venice, in order to hit in flank and rear the enemy main body which he assumed would advance towards the Isonzo, and to defeat it decisively, in cooperation with the army advancing from the coast.

In the beginning of 1916 the general situation made possible the execution of this plan. After four unsuccessful assaults, the mass of the Italian Army remained fixed in the Isonzo position. Forces were now available for the Austro-Hungarian offensive. To be sure, two Italian armies encircled south Tyrol to protect the main forces of Cadorna from a threat from that area. This circle was supported by field and permanent fortifications in the mountains. It would first have to be broken through.

For this purpose two armies were to be assembled, one back of the other, under the Army group commander, Archduke Eugene. The Eleventh Army was placed in readiness on the Folgaria-Lavarone plateau with the mission to advance on: Thiene-Bassano, to force a debouchment through the mountains into the plains of upper Italy. It was plain that the breakthrough of this fortified mountain zone of 30 km. in depth would take three or four weeks, and use up the combat strength of the Eleventh Army. For this reason the additional army (Third), which was to be assembled in the Etsch Valley between Trient and Bozen, was to follow the Eleventh Army in order strategically to exploit the breakthrough.

At the beginning of April the concentration of the Army Group was completed; the eleventh Army with very strong artillery attached was ready for attack. But deep snow in the mountains did not as yet permit. In the meantime the original idea of an operation. on the narrow front: Thiene-Bassano had been considerably modified. G.H.Q. refused to permit Army Group Headquarters to use the Val Sagana railroad for supply.

When the XVII Corps arrived in the Val Sagana, due to the Italian attack of April, it was assigned to the Third Army. In this the Army Group Headquarters brought about the early employment of the Third Army on the left of the Eleventh Army. The Supreme Command impatiently awaited the attack. In the Eleventh Army, meanwhile, the assignment of an additional division to the VIII Corps brought the center of gravity to the right wing. The center of gravity had previously been with the center corps, the XX, which was to advance by the shortest way on Arsiero.

On 15 May the attack could finally be launched. Although the movement for surprise had long passed, due to the long period of waiting, yet the VIII and XX Corps gained notable preliminary successes, the latter admirably supported by the artillery of the III Corps which was in an advanced position. But already on the 18th the Army Group gave command of the III Corps to the Third Army. Thus ended the idea of using the Third Army to exploit the breakthrough. Two days later the III Corps advanced to the attack and attained one success after another.

Unhappily these partial successes were not followed by ruthless exploitation. Before the offensive the Army Group haa announced that the objectives were to be carried with a minimum of casualties. This resulted in the use of time consuming artillery fire in cases where immediate pursuit was in order. In other cases, attainment of the day's objective was considered enough. This systematic procedure cramped the morale of the troops and gave the enemy opportunity to bring up reinforcements.

By the gradual use of almost all of the divisions which had been intended to exploit the breakthrough, on 8 June they reached the line: Strigno-Asiago-Arsiero-Pasubio. This was near the south edge of the plateau which the enemy was stoutly defending. At this time two divisions had to be sent to the east front due to the Brussilov offensive there. The attack on the plateau continued but did not reach the plains. It is a question whether the goal would have been reached even if the two divisions had been retained.

But even if success had been gained, it is not certain that the eventual purpose would have been achieved on the plains because" the enemy's reinforcements had given him a great numerical superiority, while German reinforcements" were no longer available. On 16 June the offensive was halted because forces were needed on the East front. The Army Group had to withdraw to shorten its front.

The unsuccessful outcome of the offensive has several causes: (1) the departure from the basic idea of attack on a narrow front; (2) the ordering of limited objectives; (3) the failure of surprise; (4) the Brussilov offensive.

.
You do not have the required permissions to view the files attached to this post.
Top
6 posts • Page 1 of 1