Discussions on all aspects of the First World War not covered in the other sections. Hosted by Terry Duncan.
7 posts • Page 1 of 1

The Jasta 39 was formed on June 30, 1917 in Hanover by the Fliegerersatzabteilung (FEA 5) according to the decree of the Ministry of War (No. 1263.6.17.A.7.L). Ltn. Karl August Raben was first stationed with the Thuringian Field Artillery Regiment No. 55 before he reported for flying. He was transferred to Kampfgeschwader 5/ Schutzstaffel 7 in August 1916 and stayed there until the end of January 1917. However, his greatest wish was to become a fighter pilot, which was fulfilled in early 1917 when he was admitted to training at Jasta School I. Upon successful completion, he served with Jasta 36 in France from February 17 to August 1, 1917.

Ltn. Karl August Raben proved himself with the Jasta 36, ​​so that he was entrusted with the leadership of a new squadron. His squadron was born on August 2, 1917 in Hanover. Her name was Jasta 39 and and she was assigned to Sector B Army Detachment under Raben's command on 15 August 1917. Their first location was Ensisheim and their first flights took place from August 26th. Shortly thereafter, the squadron's first casualty was Ltn. Josef Klever, who died on September 3 near Wattweiler. On September 15, the Staffel was then moved to Italy to the Isonzo front to support the Austrian army.

Two more fighter squadrons (Jasta 1 and Jasta 31) were also assigned to the southern front. Jagdstaffel 39 was stationed there at various airfields until March 13, 1918. The main area of ​​action of the squadron was the area south of Belluno at the foot of Monte Serva (2132m) on the Piave.

On September 26, 1917, Ltn. Raben scored his first victory with a double kill on the same day. He shot down two of the enemy's Caprioni. At that time, Ltn. Raben came up with the idea of ​​marking his aircraft, an Albatros D III (OAW)3, with a white raven. Other squadron members followed his idea and painted their machines with an identical black raven (e.g. Ltn. Wagener). Raben must have realized how important it was for squadron members to identify with their unit. A common emblem was a very obvious means of doing this. Interestingly, this raven is much more aggressive in shape and more closely modeled on the eagle of the pilot's cup than raven's later emblem on the Jasta 18 in France. By the end of the mission in Italy, Ltn. Raben had achieved the two confirmed kills, but there could still have been unconfirmed ones.

It's all. Cheers. Raúl M

On October 24, the great Battle of Caporetto (12th Battle of Isonzo) began, in which the German-Austrian-Hungarian army attacked the Italians along a 20-mile front on the Isonzo and defeated them devastatingly. In the early days of this offensive, the squadron was fully employed in combat.

On October 25, nine enemy planes were destroyed (eight of them confirmed). These went to the accounts of Lt. Gaim, Lt. Ultsch, Lt. Busch, Lt. Bertelsmeier, Vfw. Hippert with a kill each and Vfw. Ueberschaer and Lt. von Kerssenbrock, who shot down two planes each. The next day, October 26, the squadron managed to destroy seven enemy planes again. Lt. Werner Wagener, who shot down a Caprioni and a Voisin, stood out in particular. He was a close confidant of the squadron leader, Lt. Raben. Lt. Bernhard Ultsch also managed to shoot down two Caprioni.

The Jagdstaffel had been stationed at the Campoformidi airfield since the beginning of the Italian campaign (September 20 to November 13, 1917). Here, on November 3, it received Jasta 1 as a guest for a week, with whom they shared the airfield. Of course, this was a good opportunity for the pilots to share their experiences with each other, and the celebration was also part of it. So they lay in the sun to detect the enemy's flight movements, prepared feasts, butchered animals, and finally celebrated merrily.

In Italy there was a lot of cheap wine, like Hptm. Hermann Köhl describes "which was able to undermine male discipline" through "violations of respect". Hermann Köhl solved the binge problem by allowing his pilots to drink as much as everyone could and wanted at the expense of the squadron. The next day, a day off, most of them were so dizzy "that they took sacred oaths never to drink the damned wine again."

On November 4, Jagdstaffel 39 suffered the loss of Flg Anton Huchler, which was shot down over Cividale. Due to the course of the war, the entire squadron changed airfields three times in the following days.

From November 13 to 16, the Jagdstaffel 39 was briefly stationed at San Giacomo, followed by November 16 to 18 at Roveredo and from November 18 to December 11 it flew from Cervada. Roveredo airfield was also the site of Bombardment Wing (Bombengeschwaders) 4 which, however, did not arrive here until early December 1917.

On November 17, the Commander, Leutnant August Raben, was seriously injured by artillery fire, for which she had to hand over command to Leutnant Franz von Kerssenbrock as his deputy. On November 25, Leutnant Werner Wagener was seriously wounded in action. He had just shot down a balloon on November 22. But that's not all, on December 3, 1917, the squadron lost its leader in command, Leutnant von Kerssenbrock over Conegliano. He had scored three kills in the previous weeks and then had been brought down in flames as well. Already on December 5, 1917, followed Uffz. Alfred Rüsch, who died in the air over Aviano.

With the sympathy of the comrades, the coffins of the two dead (von Kerssenbrock and Alfred Rüsch) were laid out in the cathedral (location unknown) and they were given an escort of honour. However, there have also been successes. On November 23, Vfw. Bernhard Ultsch scored his fifth kill with the Staffel (he had a total of eight wins).

After the death of Leutnant von Kerssenbrock, Oberleutnant Josef Loeser followed as the new commanding officer of Jasta 39 from December 4, 1917 to February 4, 1918. The following situation then arose: Oltn Loeser took over Jasta 39 on December 4, however Ltn Raben reported back to duty on December 17th to continue leading his squadron.

The High Command solved the unpleasant problem by appointing Oltn Loeser as Jasta-Gruppenführer of the three squadrons based in Italy and not allowing Ltn August Raben to active duty. On February 4, 1918 until the end of the war, Ltn Johann Hesselink took command of Jasta 39.

What's the total of air to air kills did August Raben had during WWI? Did he had unconfirmed kills as well?

Shortly before, on February 4, the squadron suffered another loss. The VfW pilot. Rudolf Wiesner, a 24-year-old law student, was brought down above of Vittorio. It was not until March 14, 1918 that Raben was again given command of a squadron, this time the Jasta 15 in France. Already on March 20, 1918 the supreme command changed to commanders Ltn. Raben and Obltn. Ernst Turck of the Jasta 18 for each other. Jagdstaffel 18 then became Leutnant Raben's last squadron until the end of the war, which also became famous as the "Raben-Staffel". With his squadron in France, he scored his other two confirmed victories.

Returning to the Jasta 39 before being transferred to the Western Front in March 1918. In Italy it recorded 41 kills and 27 more by the end of the war, thus destroying 68 enemy aircraft (including 14 balloons). His own losses amounted to seven pilots. Five others were injured, one was captured and a pilot was killed in an accident. The Albatros D III (OAW) and D V were primarily used as aircraft. The aces of Squadron 39 were on the Western Front in 1918: Uffz. Hans Nülle with 11 kills (including 7 ballons), Vfw. Ludwig Gaim 5 kills on the Isonzo front, Vfw. Wilhelm Hippert 5 kills during the Battle of Caporetto, Ltn Wilhelm Sommer 5 victories (Western Front) and Vfw. Bernhard Ultsch, who scored a total of 12 victories, 5 of them in Italy.

Until the end of the war, the Piave was the river of destiny on the southern front. Similar to Verdun in the west, countless soldiers from both sides lost their lives here. About 5,000 soldiers died on the Austro-German side, 13,000 soldiers on the Italian side, and more than 300,000 Italians were taken prisoner. Ernest Hemingway was someone who experienced this and processed it into literary works like "In Another Land" or "Across the River and in the Woods." His conclusion: "Never think that war, however necessary or justified it may seem, is not a crime."


What's the total of air to air kills did August Raben had during WWI? Did he had unconfirmed kills as well?

AFAIK 4 kills (two in Italy and two in France). I did not find any number about not confirmed kills.
You do not have the required permissions to view the files attached to this post.
Top 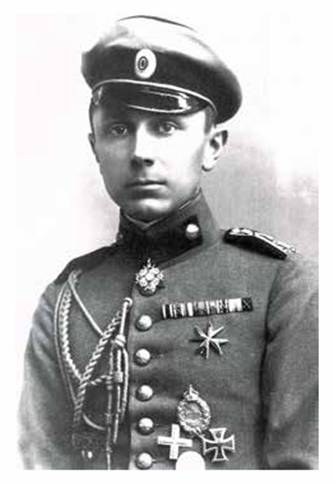 Ltn. August Raben in full gear. Among other things, he received the Saxon-Ernestine House Order and the Russian Order of St. Stanislaus 2nd Class..................

It's all. Cheers. Raúl M

Some more information regarding the photo in question that shows Fighter pilot Leutnant August Raben in Russian staff uniform as a member of the Kommandeur der Flieger of Colonel Prince Pavel Mikhailovitch Avalov-Bermondt’s Russian Army of the West during the 1919 fighting in the Baltic. Note the Maltese cross below his ribbons: the German-Russian Army of the West Volunteer Avalov Cross.

Raben is displaying the Russian Order of St. Stanislaus 2nd Class (without Swords) at his neck. On his breast, he displays the following: the Prussian Iron Cross 1st Class, the Baltic Cross, the German Army Pilot’s Badge, and Wound Badge in Silver. He was also a recipient of the Knight’s Cross with Swords of the Royal Hohenzollern House Order.