Discussions on the propaganda, architecture and culture in the Third Reich.
2532 posts

I believe the Goebbels villa was on Hermann-Goring-Strasse but not at the intersection with Voss-Strasse. It was roughly where Ebert-Strasse and Behrenstrasse meet today, although at the time Behrenstrasse terminated at the junction with Wilhelmstrasse - unless I am mistaken.
Kein Irrtum ist so groß, der nicht seinen Zuhörer hat.
Top

I believe the Goebbels villa was on Hermann-Goring-Strasse but not at the intersection with Voss-Strasse. It was roughly where Ebert-Strasse and Behrenstrasse meet today, although at the time Behrenstrasse terminated at the junction with Wilhelmstrasse - unless I am mistaken.

Correct. Address for the villa was Hermann-Göring-Straße 20, just a bit south "where Ebert-Strasse and Behrenstrasse meet today".
Officially it belonged to Propaganda Ministry.

Gauleitung Groß-Berlin was at Hermann-Göring-Straße 14, which was at the corner with Voßstraße.
That would be the Gauleiter's office location.
(Later Gauleitung also took over adjacent property at Leipziger Platz 17.)
You can get pretty damn far in life by just saying what you're going to do and then doing it.
Top

Yes, the Voss/Göring Strasse location was the offices of Gauleitung Berlin, where Goebbels had an office as Gauleiter. Thanks for providing the street address numbers.

Br. James wrote: ↑
20 Oct 2021 16:18
The garden of the Reichschancellery must have indeed been a beautiful oasis in the heart of metropolitan Berlin!

Hello- The columns were outside of Hitler`s office. The area along the front of the wall is where those famous films and photos, were taken of Hitler reviewing a row of Hitler Youth in March 20 1945. These kids were pulled from battle and presented by Hitler Youth Leader Artur Axmann. The date is sometimes mistakenly mentioned as April 20th, Hitler`s birthday.
Top

Fait Accompli? wrote: ↑
20 Sep 2021 19:34
I took this top photo around 1996. It's the infamous mound along Vossstrasse that people often mistook for the remains of the Fuhrerbunker but was probably part of the RK remains. I believe that must be Vossstrasse in front of me, though it's not clear. Today the Mall of Berlin would be at my back.


Anyhow, the mound is gone today. Or is it? There's a strange mound right in the middle of the parkplatz on Vossstrasse. Does anyone know what this mound is? Or why this parkplatz remains undeveloped so many years after the rest of Vossstrasse has been redeveloped?

If you notice that building off to the left. It is on the Vossstrasse, and the only building on the street that survived intact. It housed The Ministry of Transport I think. It has been under monument protection, which saved it from demolition. Today it is being incorporated into new structures on each side. However the original beautiful facade is remaining as is. It is amazing , save for some machine gun damage, that this structure survived the bombings, and East German destruction.
Top

Hi all just a quick question, why is the eagle iver the entrance in voss strasse different in the two images, was it changed?

Regards
You do not have the required permissions to view the files attached to this post.
Top 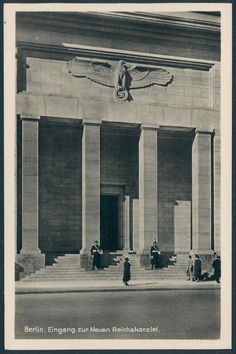 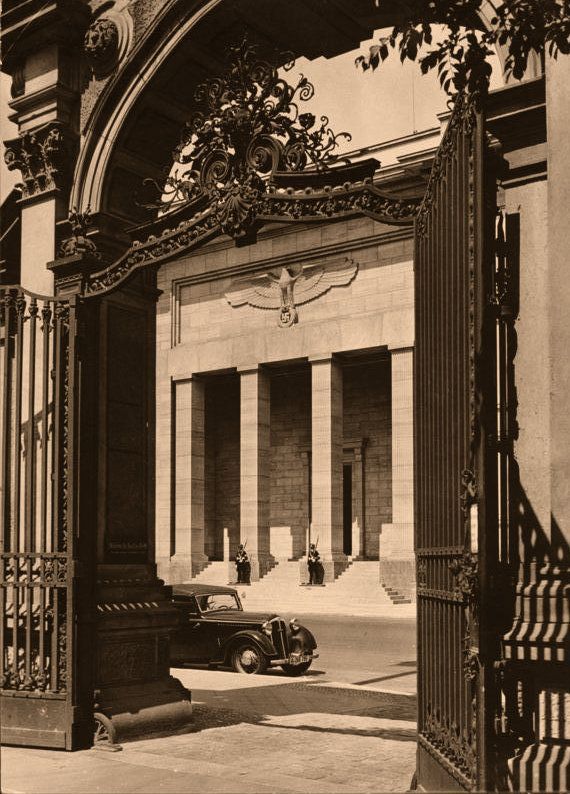 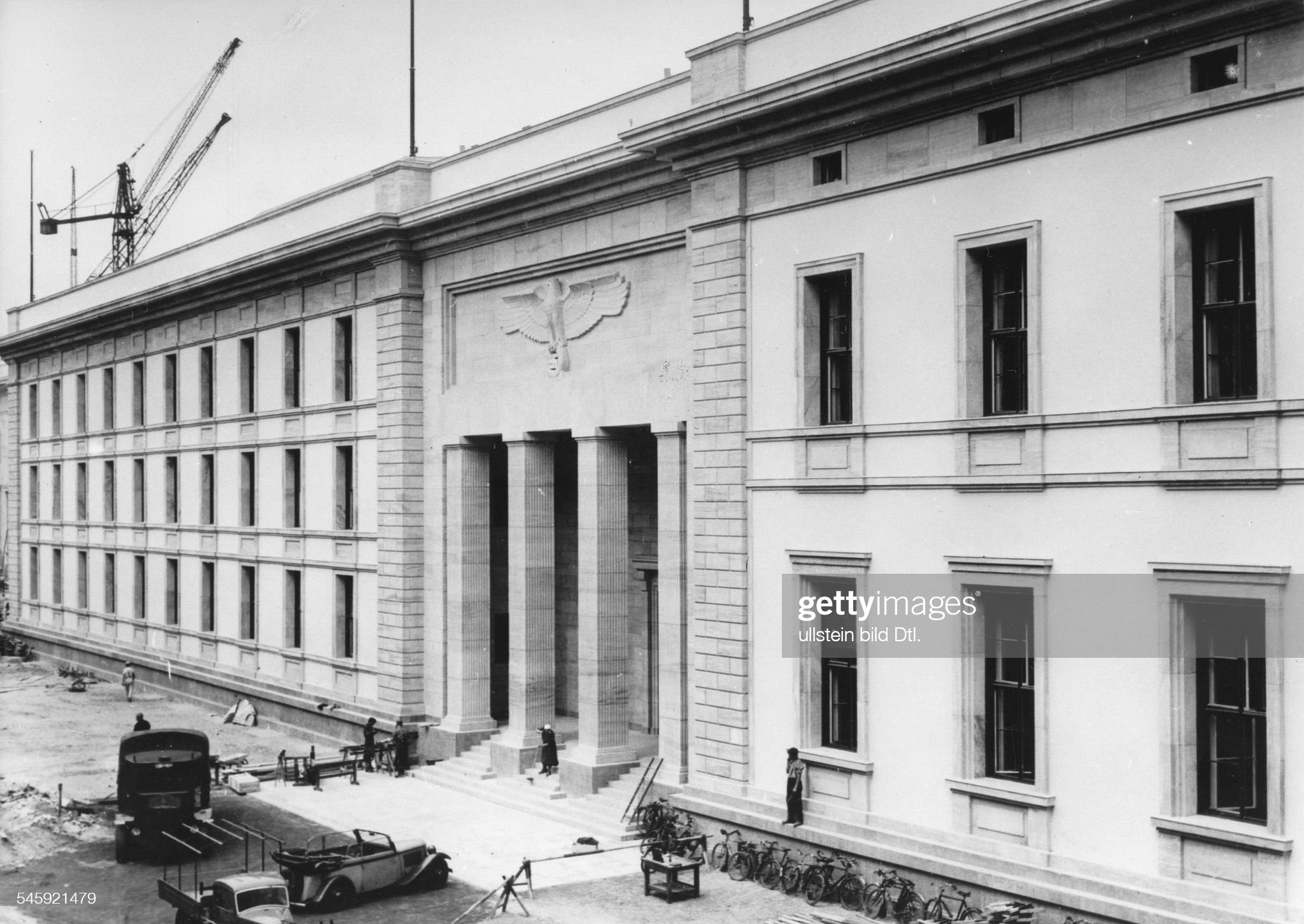 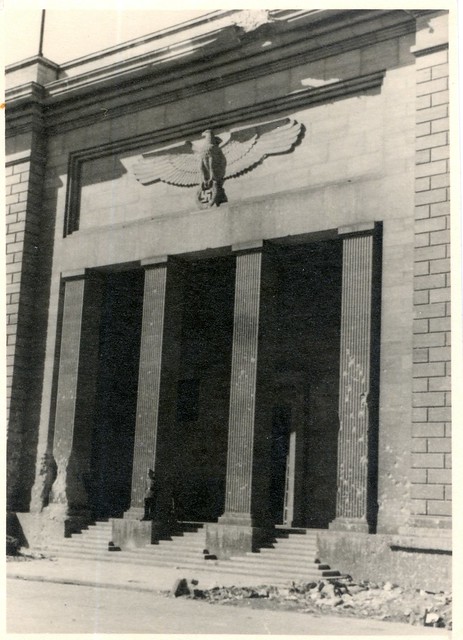 I think we must be missing something.
Is it possible that there were two identical entrances? One on Voss Str and the other ????
Last edited by Max on 24 Jan 2023 23:43, edited 1 time in total.
Greetings from the Wide Brown.
Top

I dont think wilhelmtrasse, only other main entrance had such a portico, i could be wrong though
Top

I've sent a copy of the photo to Christoph Neubauer. I'll post his reply (if any). He knows more about the NRK than anyone I can think of.
Kein Irrtum ist so groß, der nicht seinen Zuhörer hat.
Top

I just received a very quick answer from Christoph. He says that the photo is of a 1:1 scale model of the facade. The design for the Reichsadler had not been completed so the builders built their own version of it.
Kein Irrtum ist so groß, der nicht seinen Zuhörer hat.
Top

Mannheim wrote: ↑
24 Jan 2023 23:00
I just received a very quick answer from Christoph. He says that the photo is of a 1:1 scale model of the facade. The design for the Reichsadler had not been completed so the builders built their own version of it.

Hi
Thanks for the clarification
Top

Thanks be to Christoph. It had me bamboozled as well! I have a copy of that photo nd I never noticed the difference.
Kein Irrtum ist so groß, der nicht seinen Zuhörer hat.
Top

Well I'm still confused.
Sobel's pic of the 1:1 model shows the Reichsadler, as would seem appropriate for a national [not party] building.
The actual building showed a Reichsadler in its early days.

There are two pics showing damage to the facade; presumably mid 1945 ; one with a Reichsadler the other with a Parteiadler.
How can that be?
Why would the party emblem, as opposed to the national emblem be used on a government building, or did the Parteiadler, like the flag also become a national emblem?
Greetings from the Wide Brown.
Top

A 1:1, in other words full size, "model"? They made a full size model because the design hadn't been completed? That seems a huge effort. So when the design was completed they ripped out the model and built the correct one? It just seems a bit implausible to me. No offence to your expert but is that what really happened?

If you look at the first two photos marked "Parteiadler" in post 2513: the first one is taken from across the road, some distance away from the RK entrance, maybe taken from an open space opposite. The second (through the gate) shows that there is some other building/structure directly across the road, not an open space. Could this indicate that we are in fact looking at different (but almost identical) entrances? Or are we quite firm that we're looking at the same entrance, with the two photos taken before and after facade changes? I do admit that the two photos are taken from different angles.
Top
2532 posts