Discussions on the propaganda, architecture and culture in the Third Reich.
635 posts

No, it is not simple as that. There was a decades lasting fight which place in the crowded area would be of a political correct use. Usually it was planned to be build in the Gasteig area, and then they changed places and areas on and on... The Brown house area was left and is the part of the Bavarian Governement. their financial tribute, to this place.
Top 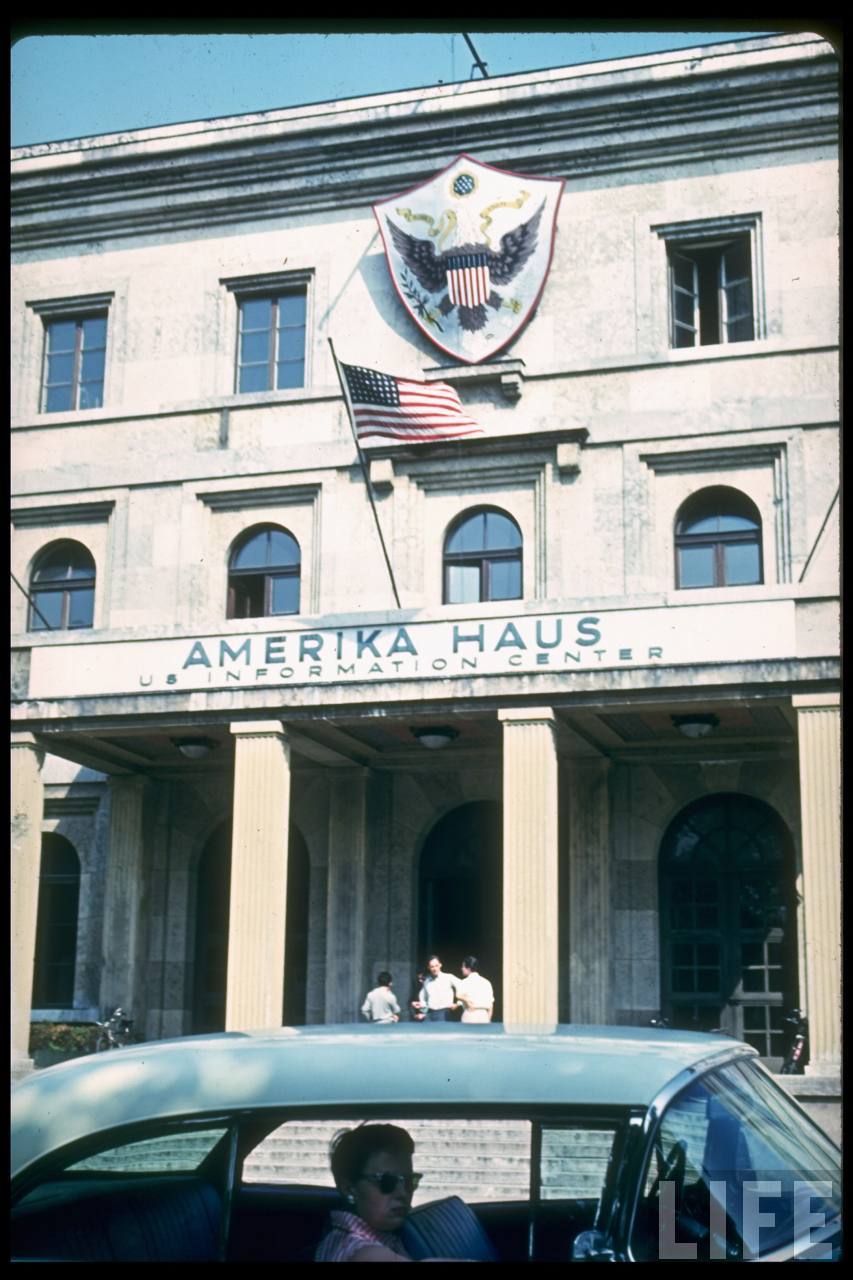 Fuhrerbau in the late 1950's.
Source: Time LIFE Collection
Anyone has an exact present shot of this? And is the big American shield covering an eagle?
Top

This is one I shot in 2005 but I am sure someone else will have a more recent one.
You do not have the required permissions to view the files attached to this post.
Top

Thanks Annelie, I found that there actually was a huge metal eagle there from checking thirdreichinruins.com and the traces are clear in your picture.
Top

Take a look at the top of the website. This nice white dice should be the new building.
And of course: To built this "Documentation Center" on this area is a sign.
Note: When we were Nazis, we were Nazis out and out. You would have found no "better" Nazis than us. Now we are "Demokraten" and against Nazismus. And you can be sure, now we try, to be the best Demokraten and the best and rigorous fighters against Nazismus in the whole world. Always the extreme....


Thanks for the link, Ralf....and as I can tell, it's definitely different from the old Brown House!

I was invited to a senior's going away party last month in Baldham and managed to hop over a fence behind a children's playground to visit Josef Thorak's studio:

Hitler visited Thorak’s Berlin studio in 1936 and the two men discussed “great projects.” In January 1937, Thorak wrote Adolf Wagner—a Gauleiter and the Bavarian minister of interior, education, and culture—and requested a new studio, reporting, of course, on his recent meeting with Hitler.This initiative paid off, and in October, Wagner accompanied the recently appointed professor at the Munich Academy to the lake region fifteen kilometres southeast of Munich to inspect potential sites. This led to the construction of (the first) studio at Baldham, which was paid for with state funds—a sum in excess of RM 215,000.298 The initial structure, however, was soon perceived as too small, and the following year, Hitler commissioned Albert Speer, a good friend of Thorak’s, to design another. The new atelier was so large—over four stories high—that it easily accommodated figures with heights in excess of fifty feet, as was the case for the Autobahn monument. The massive stone atelier, which postwar experts considered razing but deemed “virtually indestructible,” cost around RM 1,500,000.300 This structure reflected the usual grand patronage of the Nazi leaders, but also their typical means of proceeding: after the war, the man who owned the land used for the Thorak structures claimed that it was “earlier his family property which he had sold only under pressure.” Such considerations were of slight importance at the time, however, and amidst the construction of Speer’s building in February 1939, Thorak held a huge party (ein Richtfest) which attracted a throng of Nazi Germany’s political and cultural luminaries.
Petropoulos (265-266) The Faustian Bargain - The Art World in Nazi Germany
You do not have the required permissions to view the files attached to this post.
Top

The doors are beautiul which makes one wonder what the inside may look like?
Top

Annelie wrote:This is one I shot in 2005 but I am sure someone else will have a more recent one.

Here is one of mine from 2010 . . . will be back in a few weeks, and try to get a contemporary shot for you.
You do not have the required permissions to view the files attached to this post.
History is the witness that testifies to the passing of time; it illuminates reality, vitalizes memory, provides guidance in daily life, and brings us tidings of antiquity. - Cicero
Top

The doors are beautiul which makes one wonder what the inside may look like?

I don't know, Annelie, but it sounded like a party was taking place inside. I was just conscious of the dogs...
This student's father has a veritable museum in his basement, with original magazines, uniforms, flags, uncle's wartime diary with photographs (with him and Raeder) etc etc etc. I was frustrated that his son was an expert in weapons and war and would never apply himself in class, simply hoping questions on military strategy would appear in the exam.
Top

Check out Thorak's studio in Google Maps (satellite view) - http://maps.google.com/maps?q=48.096397 ... 1&t=h&z=16 . There is a really weird "glitch" in Google Maps there (I first noticed this a year or so ago, because there is one right on top of Thorak's studio). If you zoom out and pan left and right, you will see more of these odd white and rainbow "artifacts" of various sizes. At one time I thought these were reflections from roof-mounted solar panels, but some of the ones around this location are right in the center of roads, so can't be that. It's got me stumped ...
Top

From 50m I can see it, but it disappears at 20m
Greetings from the Wide Brown.
Top

these odd white and rainbow "artifacts"

a camera lens exists out of multiple glass lenses.
The same reflection can apear again on a different place because it is mirrored through another glass in the lens.
Since every glass has its own shape, hollow or arched, each in a different way, these things can happen.
Therefore it can be explained why those white spots or rainbows (reflections) do apear above a non reflecting thing like for instance a road.
Top

I love this Munich Tread, the before and after images are the best.

The doors are beautiul which makes one wonder what the inside may look like?


I got a tour of the Thorak studio and surrounding area some years ago. I took some photos and a lot of video from the inside and outside.