Discussions on the propaganda, architecture and culture in the Third Reich.
5941 posts

Thank you very much Knut! I just sent an email to the "info" address that you posted requesting ordering information. Since I do not speak German I hope that my email will be understandable.
Tom
Top

Did anyone see Band of Brothers? In the end they were all in an amazing looking mountan top house that was Hitlers. Was this the berghof? Because I don't think the Berghof was on a mountan top...What was this that they were in? I know it was berchesgaden but I don't know which part it was. It's very strange.
Top

Truffelschwein wrote:Did anyone see Band of Brothers? In the end they were all in an amazing looking mountan top house that was Hitlers. Was this the berghof? Because I don't think the Berghof was on a mountan top...What was this that they were in? I know it was berchesgaden but I don't know which part it was. It's very strange.

"Band of Brothers," both the book and the HBO show, is confusing on the aspect of the "capture" of Berchtesgaden and the Eagle's Nest. The reason for this is that Steven Ambrose was confused, because the veterans themselves were confused!

To try to make a long story shorter ... Berchtesgaden itself and the Obersalzberg complex, including Hitler's Berghof home, were first entered and captured by soldiers of the 3rd US Infantry Division (7th and 30th Infantry Regiments), on the afternoon and evening of 4 May 1945. Although both the 101st Airborne Div. and the French 2nd Armored Div. were trying to reach that area first, roadblocks and blown bridges prevented that, and the 3rd Infantry Div. beat them all to it.

"BOB" shows the 101st "capturing" the town of Berchtesgaden, then going on to capture the Eagle's Nest (Kehlsteinhaus), on the mountain. It "skips" the Obersalzberg complex and doesn't actually show Hitler's Berghof, although there is some confusion between the Berghof and the "Eagle's Nest." This could be considered natural, because most American soldiers were a little fuzzy about what, exactly, the "Eagle's Nest" was - some thought it was the Berghof.

Maj. Richard Winters always maintained over the years that as far as he was concerned, the 506th PIR of the 101st were the first soldiers in Berchtesgaden, because when they got there, there were no other Allied soldiers there. Unfortunately, Maj. Winters was mistaken. I believe that he did not see any other Allied troops there, but that's because they were already up on the Obersalzberg, which was the big prize. The 101st units didn't arrive until the morning of 5 May and later in the day. The 3rd Inf. Div. and French troops had already spent the previous night on the Obersalzberg, and were having a flag-raising victory ceremony up there on 5 May. The 101st arrived *after* that. I can understand that perhaps Maj. Winters didn't see any other Allied troops in Berchtesgaden, but when Easy Co. finally got up to the Obersalzberg, they could not have missed the huge crowd of GIs and French soldiers, gleefully plundering everything they could get their hands on.

There is still some debate on exactly WHO were the first Allied troops to set foot in the Eagle's Nest on the mountain. I have not read any accounts by 3rd Inf. Div. soldiers who claimed to be. I have read an account that a French contingent drove a jeep up there the night of 4 May and returned (although I wonder about this one, as the road was supposed to be impassable due to the snow). It may very well be that the honor of being the first in the Eagle's Nest belongs to the 101st.

BTW, the set in "BOB" for the Berchtesgadener Hof hotel looks nothing like the real thing, but they did try on the Kehlsteinhaus. There were a couple of errors (the steps leading into the Scharitzkehl room go down, not up), but it was a good effort.

"BOB" does eventually show the Obersalzberg itself ... when they "discover" Goering's wine cellar. I don't know what that room actually looked like, but the outside of the house is a very good rendition of what the ruins of Goering's bombed house looked like in May 1945.

Geoff Walden thank you very much for the reply and explanition. I understand now that the eagles nest is not the same as hitler's house,I origional thought that it was.

The "Band of Brothers" scenes in Berchtesgaden were not actually filmed there, and that's not the real Eagle's Nest, but I don't know where they were filmed. As I understand it, the interior sets of the Kehlsteinhaus were filmed in England - the sets looked pretty realistic, except for that one staircase that they had going up instead of down. There is a nice touch when they are in the main hall - on one of the tables is a wooden bowl on a pedestal - the original of this is in the 101st Airborne Div. museum at Fort Campbell.

I *think* that exterior shot of the Kehlsteinhaus up on the mountain was a CGI. I heard they used some Swiss mountains for the background (don't know if this is true). For that matter, they *could* have used a modern shot of the real thing, and just taken the roof antennas out of the picture. From that distance it looks the same as in 1945.

I forgot to mention another really nice architectural/art touch in "BOB." In Part 9 ("Why We Fight"), just as they are leaving Stürzelberg (they're in the trucks and DUKWs, singing the Paratroopers Song), in the background is a wall mosaic with a guy in Bavarian dress holding a swastika flag, with the label Stürzelberg Postamt. This was a copy of a period mosaic on the wall of the Berchtesgaden Postamt - this mosaic is still there, minus the swastika. I wonder why they didn't put this in the Berchtesgaden scenes?

BTW, there is a Stürzelberg in Germany, but it's on the Rhein river south of Dusseldorf - I don't think the 101st were near there. Not sure, though.

Glad you enjoy the webpage.

Geoff
You do not have the required permissions to view the files attached to this post.
Top

As you know the Gen.Walker Hotel was torn down and now we have a InterContinental Hotel Resort.

Now the Simon Wiesenthal Center has an issue about their present annoucement...

The Winter 2005 (sic) InterContinental Hotels magazine Highstyle carries an article entitled "Berchtesgaden: It's not just a peak, it's a treat" (pp 30-31).
The section, "what should the visitor see?" thrills to "the woodland and meadows", "mountain goats, marmots...golden eagle...one of the most beautiful (ski) pistes in Europe", "for a unique experience, take a tour of the Salzbergwerk salt mines. Visitors change into a protective kit and descend into the bowels of the earth."
The section, "what about nightlife?" speaks of "restaurants and beer halls that provide a cosy spot...(for) a display of thigh-slapping local dancing."

They rather would have another docu center with a "greuelpropaganda"
museum and gas chambers made out of it.

"unfortunately, Berchtesgaden holds a rather more sinister significance than a 'treat', 'ski piste', 'thigh-slapping local dancing' and 'yodelling.'
He added that "it was the seat of evil, where Adolf Hitler, Hermann Goering, Joseph Goebbels and the Nazi leadership took most of the decisions that cost the world 70 million lives."

Are they fuckin nuts to put a hotel there? it should be kept as a place of history. now it's private property. How dumb.
Top

Are they fuckin nuts to put a hotel there? it should be kept as a place of history. now it's private property. How dumb.

In my point of view, yes, it might be an "historical site", but it´s good they took the building down.
Same thing goes for the Hitler Bunker in Berlin. Some things just should be remenbered in pictures and not in real life.
Hey...I´m a world war II buff (like most of us here) and I like studying and researching it´s history and arms, but there are things that just should not be. Did anyone ever asked why they tore down the Roman Forum in Rome, and built a hotel next to it? Of course it´s a bloody crime... but life goes on. All it counts is that humanity may never forget that it existed. 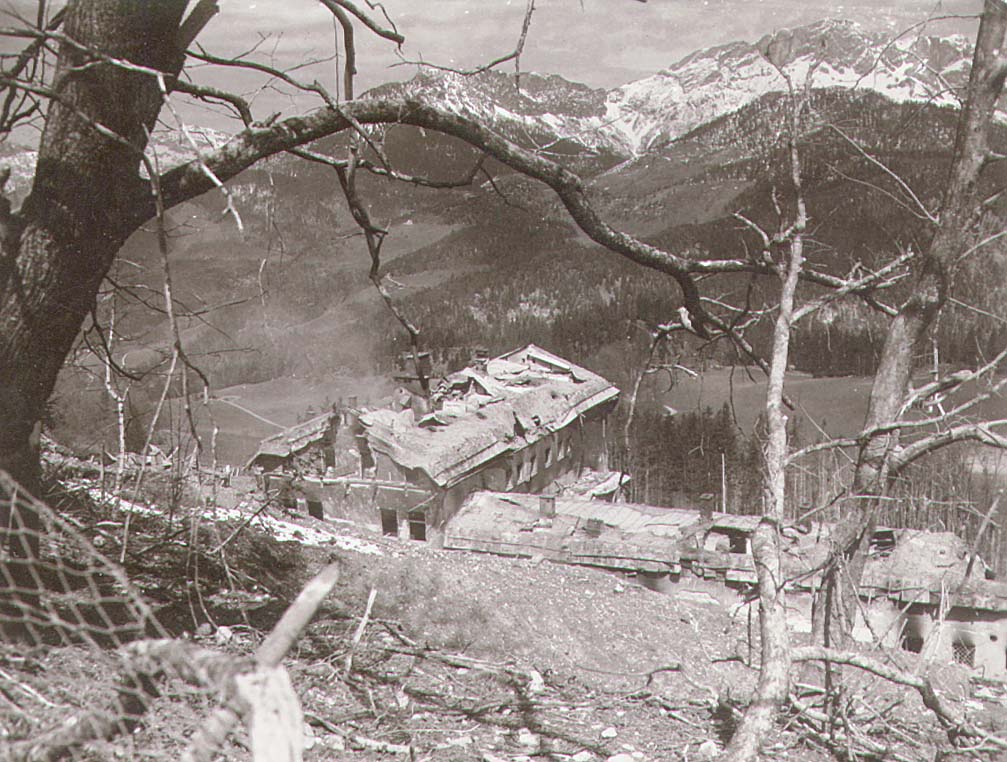 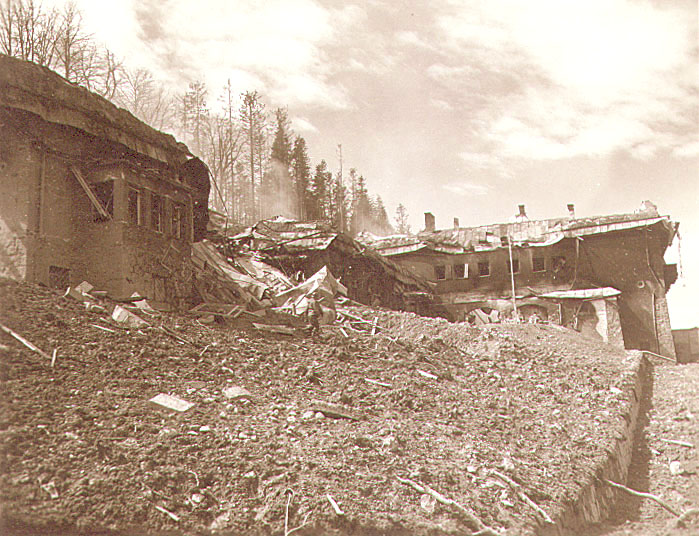 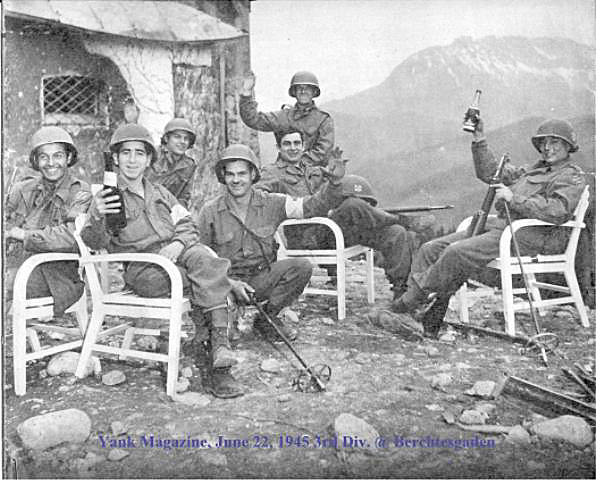 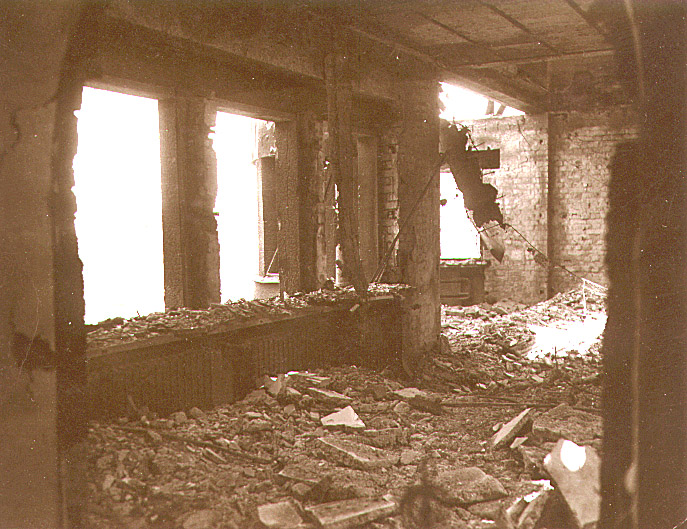 Addentum to the Wiesenthal story.

Just read in a travel magazine that InterContinental Hotels made a deal with SWC and give any Israely citizen who asks, an extra night free of charge if booked more than 3 days.

I yes they accomplished their mission!
Top

Yes, those are cool ebay pictures. How haunting it must have seemed burnt out to visitors of the ruins... But not as bad as visiting the bunker, which even Churchill, who began descending the staircase, and decided against it. Must have seemed to spooky. i bet it was haunted!

H. Göring Hotel at the Obersalzberg

Ahoi,
I`ll send some photos and you could decide what you think about the new hotel?
Did you really think that this hotel fit in this mountain area?
Please write your comment. Thanks in advance.
Your very nosy
Knut
You do not have the required permissions to view the files attached to this post.
Top

New Hotel at the Obersalzberg

And another one...
You do not have the required permissions to view the files attached to this post.
Top

Enjoy a colour photo of Berchtesgaden from 1938 ...
You do not have the required permissions to view the files attached to this post.
Top
5941 posts