Discussions on every day life in the Weimar Republic, pre-anschluss Austria, Third Reich and the occupied territories. Hosted by Vikki.
6 posts • Page 1 of 1

I have finally finished the first material in ‘MUNICH’ series of articles, devoted to the Second World War, the Third Reich era and the Holocaust. I believe that you have also read about the infamous ‘Beer Hall Putsch’ in every second book on the era. In my detailed 5000-word article I would take you along all the main locations and stops of the failed Nazi 1923 revolution with plenty of photos and historical facts. I hope you would also take advantage of a few map visualizations I have made specifically to deepen into the topic in addition to the travel itself. Please leave your comments, ask questions, share your own stories and be my constant guest on the blog.
https://war-documentary.info/beer-hall-putsch-route/ 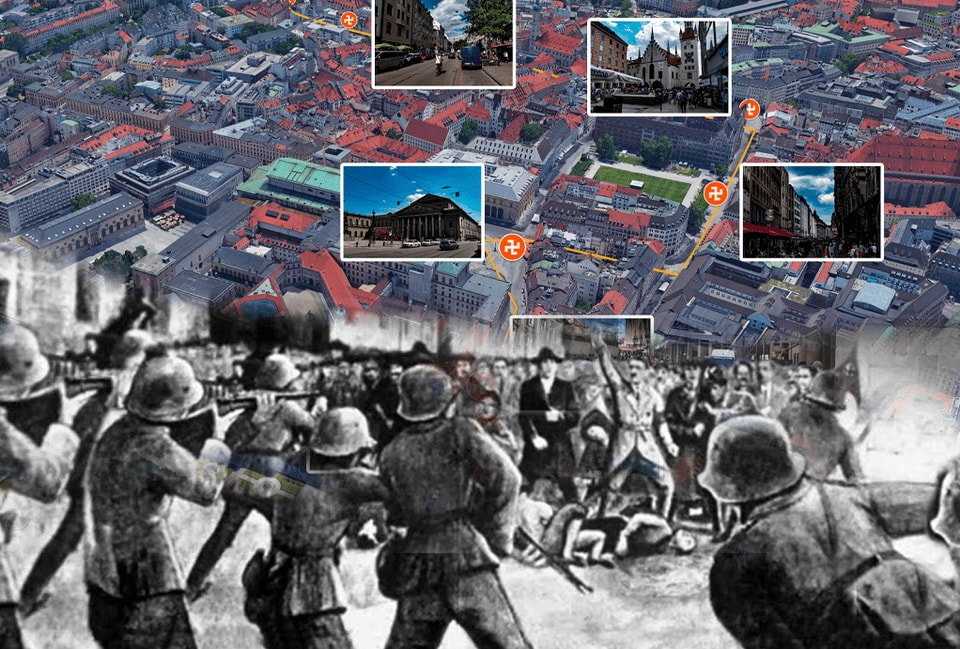 Thanks a lot! Great work!
Top

Does anyone know where was the original gathering point for Hitler's supporters before they arrived at Bürgerbräukeller ?

According to eye-witnesses, eight trucks with Hitler's supporters arrived at Bürgerbräukeller at 8:40pm (November the 8th). They blocked all exits and at 10:15pm Kahr's speech was interrupted by Hitler showing up on the stage.
The more you let yourself to go, the less others will let you to go.
F.Nietzsche
Top

On November 8th the main body of the revolutionary forces gathered at the Löwenbräukeller, with smaller groups situated at other Munich beer halls. Those who met at the Löwenbräukeller included the SA Regiment München, the Stosstrupp Adolf Hitler, the Reichskriegsflagge and the Bund Oberland. I assume that Hitler and the truck-loads of his supporters that arrived at the Bürgerbräukeller came there from the Löwenbräukeller. When these departed, the remainder at the Löwenbräukeller, under Röhm's general leadership, went over to the Bavarian War Ministry in the Odeonsplatz and occupied that building. As we know, the large march which constituted "The Beer-hall Putsch" was an effort from the Bürgerbräukeller to relieve Röhm's men -- eventually surrounded by the Bavarian State Police during the night of the 8th -- and the final confrontation took place at the Feldherrnhalle.

Hitler boasted that 600 strong SA-man force took control of Bürgerbräukeller. They wouldn't fit on eight trucks. He possibly exaggerated the number, but quite likely more SA-man converged on Bürgerbräukeller from other locations (beer halls) as you mentioned.
The more you let yourself to go, the less others will let you to go.
F.Nietzsche
Top

The whole thing was worse organised. Political situation in Germany had changed and it was to late for a "national revolution". Bavarian authorities knew that something was coming from Hitler and accomplices and did their preparations. F.e. v. Lossow had ordered his men "don't follow any orders which comes "in my name" or with my signature. Only when I come personally you will follow me". V. Kahrs deputy had also strict order to refuse any Nazi troops to come into government building. Hitler's men failed to get control over Reichswehr barracks and government buildings. When Hitler stayed at Bürgerbräukeller and thought v. Kahr would be on his side, high ranking police men, administration officials and members of Bavarian governement organised troops against Hitler. Hitler disputed with v. Kahr and held martial speeches to his men, but meanwhile police forces hurried to Munich. Next morning Hitler realised he failed. His march was an act of despair and helplessness. They managed to overrun some smaller police forces but they had to take "detours" to avoid stronger forces and were trapped at Feldherrnhalle at last.
Top
6 posts • Page 1 of 1