Discussions on the vehicles used by the Axis forces. Hosted by Christian Ankerstjerne
33 posts

Could anyone provide a breakdown of any and all vehicles that the Germans equipped with AA guns over the course of the war? Also, of these vehicle/gun combinations, what branches of the armed forces normally used them, and were any supplied to Germany's foreign allies/puppets?

Aside from the "Ostwind" Flakpanzer IV, I have also seen a couple photos of what looked like an Sd.Kfz. 251 with a Flak 38 gun mounted in the bed. Anyone have details on that maybe?
Top

to Your last question: here some information about the Sd.Kfz. 251 Flak out of the book ""Historic Military Vehicles Diorectory" by Bart Vanderveen and pics of three different models of the Sd.Kfz. 251 Flak (source: pinterest). There was also a special model of the Luftwaffe (here two pics). You can find some pics of these vehicles in the net searching Sd.Kfz. 251/17 and 251/21.

That's a good start, thank you very much for sharing that.
Top

Hi Hyus.
If you started with Sd.Kfz. 251- here's another photo.
You do not have the required permissions to view the files attached to this post.
Top

Bert, What a shame that the first vehicle shown in the list of SdKfz 251 isn't even an SdKfz 251 ! It is the late war version of the SdKfz 11.
Alan
Top

But it is correctly identified as such in the first drawing.

On the other hand, the last photo shows a field conversion with a 2 cm KwK on a Sockellafette, taken from a Sd.Kfz. 222.
Top 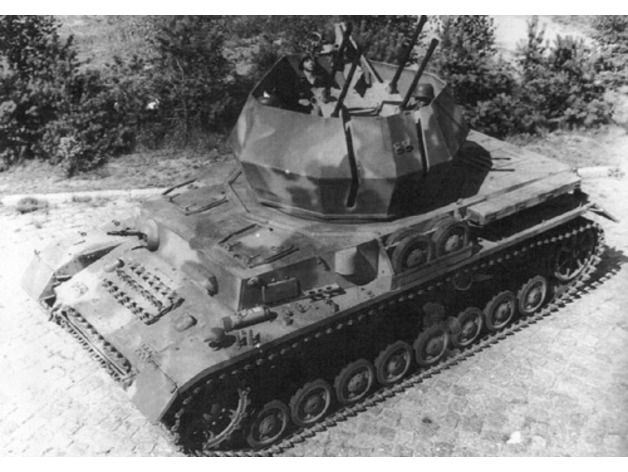 Thank you all for the replies, some very interesting pictures. Regarding the Flak 38s mounted on halftracks, were many of these field modifications, or were they mostly built as such from the factories?

Also, I have come across mention of a variant of the Sd.Kfz. 251 Flak that had "foldout" sides, which could allow 360 degree rotation of the gun and serve as a type of platform for the crew. The article mentioned it was used by Luftwaffe ground forces. Anybody know some details on that? The last photo in Bert's first post looks similar to the one I saw.
Top

You are right. The vehicles on the last two pics I posted had these "foldout" sides, which could allow 360 degree rotation. The vehicles on these pics belonged 10 the 10th battery (2nd batallion) AA-regiment of the division "Hermann Göring" of the Luftwaffe. This version was especially designed for the Luftwaffe.Source of the pics: "Die leichte und mittlere Flak 1906 - 1945" by Werner Müller.

Bert
You do not have the required permissions to view the files attached to this post.
Last edited by SIS 5 on 17 Sep 2020 23:18, edited 1 time in total.
Top

Thank you Bert. Do you know how many of this version was built, or in what theatres/operations they served?
Top

unfortunately I don´t know how many of this version were built or in what theatres/operations they served. But I found the information, that this Luftwaffe Sd.Kfz. 251/17 Flak carrier was a too complicated conversion and that only a few of these vehicles were actually issued to troops of the Luftwaffe.
Here more information about this vehicle: the Sd.Kfz 251/17 was built in three versions and issued to troops, built until 1944. Crew: four to six men. Weight: 8,8 tons. Weapons: a 2cm-Flak 38 (AA-gun) and two 7,92mm machine guns (MG 34 or MG 42). Ammunition: 600 x 2cm shells, 600 7,92mm cartridges. Radio: Funksprechgerät FuSpr. f
The vehicles on the first pic and the first drawing I posted were prototypes and were never introduced into service since it did not offer any advantage over the halftrack tractor mount Sd.Kfz. 10/5, and was costlier to build in materials and labor.
Here the drawings of the three version of this vehicle which were built (except the prototype) (source: https://www.the-blueprints.com/blueprin ... fz_251-17/).
Here an interesting pic of a Sd.Kfz. 251/17, where the 2cm gun was mounted in a small armored turret (only on the last versions of the Sd.Kfz. 251), as this modification appeared only in 1944. Though only a few of these vehicles were issued to troops, they were encountered both on the Eastern and the Western fronts. This knocked-out vehicle shows that the rear part of the fighting compartment was still open from above.
Source of the first pic: http://www.panzernet.net/panzernet/stra ... sy/251.php. Source of the second pic and the information: "SdKfz 251 in action" by Charles Kliment - squadron/signal publications Armor Series no. 21. and many more in the databases on my website at http://www.ww2technik.de/dflak_einfuehrung.htm (german only, sry). Imade it some 15 years ago so there might be some errors in the data but it´s still nice for the pics...

Thank You very much for posting these pics. Very interesting. And a really great website You made, and that 15 years ago! My compliment!
Here one drawing and one more pic of the first vehicle You posted: schwerer Einheits-Pkw (Horch) with Flak.

Regarding these Einheits-PKW that were mounted with Flak 38s, were the guns capable of any rotation in that mounting, or could they only fire from a front-facing direction?

Also, from the photos it seems like they were used by the Afrika Korps? Did any other branches of the armed forces use them? Any idea of numbers? Sorry if these questions were already answered on tom's website, but I can't read German.
Top
33 posts