what tank were considered for the adlerwerke suspension?

Discussions on the vehicles used by the Axis forces. Hosted by Christian Ankerstjerne
5 posts • Page 1 of 1

what tank were considered for the adlerwerke suspension? 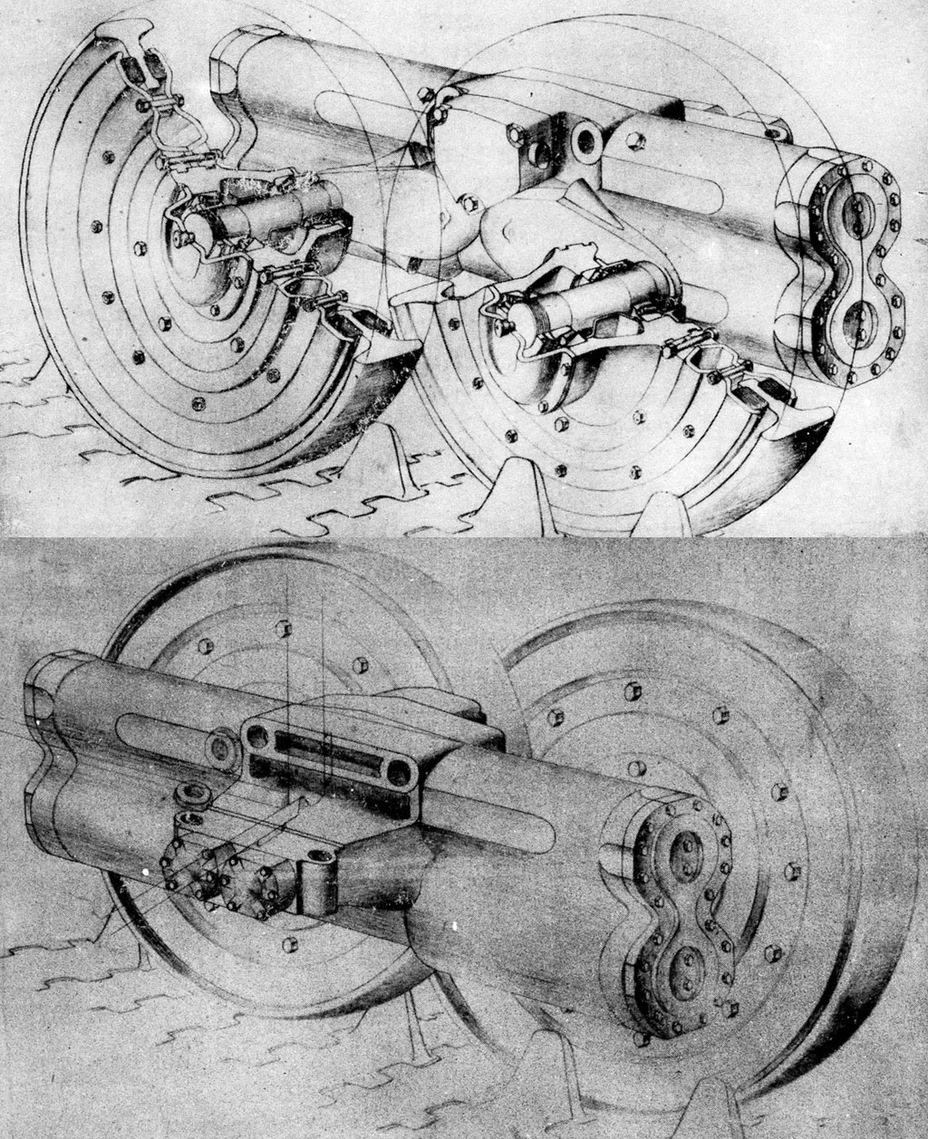 It was decided that torsion bars were difficult and costly to make, and as the larger factories were getting bombed round the clock something was needed that could be simple enough to hand to small engineering concerns to fabricate under sub- contract. The new bogie carried 800mm steel rimmed "rubber saving" wheels from the Tiger II. This type of wheel is often refered to as "silent bloc". (A similar design was also seen on the late Jagdpanzer IV chassis, albeit a much smaller size. Also Spielberger vol 9: Der PzKfw Panther und sein Abarten pp 71 has a photo of a new Panther G at a showing for the top brass. In the background is a Hummel munitions carrier with six medium size silent bloc wheels, designed by Krupp. To the best of my knowledge this design did not enter service, nor have I seen any other photos of it) The wheels were mounted on geared swing arms suspended against springs made of simple Belleville washers held in tubes, with a hydraulic shock absorber down the centre of each. The suspension unit was designed by MAN of Augsburg, and was small, due to the high loading it could take, and easy to produce. The washers could be churned out on most stamping machines. The axles for the swing arms still needed machining on a lathe, but they were nowhere near the size of torsion bars. The complete bogie was refered to as "Einheitslaufwerk", or standardized running gear. A lesson learned from the American Sherman suspension was that none of the components was handed. The wheels straddled the track guide teeth, but the same length axles were used: the wheels had a bearing spacer on one side which could be reversed, setting one wheel in and one wheel out. An escape hatch could be fitted in the hull floor now, almost impossible with torsion bars. Mine damage would be much easier to fix as the complete unit could be unbolted and replaced, where as mine damaged and buckled torsion bars often had to be removed with a cutting torch, after the interleaved wheels had been removed first of course.

The standard Panther had eight axles per side, requiring eight precise holes in each side of the hull. These had to be cut and machined with the hull in a huge special rig. Add sixteen chrome steel torsion bars (in reality 32 as each bar crossed the hull then was geared to cross back over the hull again), complete with machined bearings, specialist heat treatment, etc. Compare that with six small housings filled with plain steel washers and a couple of shock absorbers, fixed by bolts. I don't have a cost breakdown but a similar exercise was carried out by Porsche on the Jagdtiger and the savings were 50% in material costs and tooling, a 40% weight reduction and 60% on labour time (again, the Porsche suspended Jagdtiger can be seen at Bovington). Another way of saving money was to have only one wheel on each axle - the normal interleaving was two per axle - two axles per bogie and three bogies per side. This arrangement gave the E-50 twelve road wheels as opposed to 32 on the original Panther, alone a massive saving of time and effort.

Answer: Only the E50 and E75, and only once Panther and Tiger II production was transitioned to them.

source: NARA T78 R413 F1072
You do not have the required permissions to view the files attached to this post.
Top

I believe similar units were designed for the E-10 and E-25, which were single-wheel units with the same washer suspension type.
Top
5 posts • Page 1 of 1