Discussions on the vehicles used by the Axis forces. Hosted by Christian Ankerstjerne
10 posts • Page 1 of 1

From Stell ap and theory of penetration 1946
"As the angle between the trajectory and the plate became smaller owing to modern AFV design they changed from a cap with a conical front to one with a front normal to the axis of the shell and a knob just over the point."
"They maintained that firing trials had shown that design (b)* "bit" the plate at wide angle attack and the projectile was less likely to fail by scooping"

I think I can pick up this question.

German AP-caps evolved out of Navy research on armor piercing caps conducted since 1901. The initial geometric design of AP-caps (such as on 8.8cm Pzgr Gg and 7.5cm Pzgr rot) therefore closely follows the Navy Krupp L/4.4 geometry of the "sombrero shape" cap type and a similar surface hardening treatment.

Notice that the cap itselfe is wasted during the penetration attempt. Only the projectile body performs the perforation process. Any large amount of weight in the cap is therefore lost in actual penetration to the projectile body (they both have to be accelerated but only the body goes into and through the plate). This put a limit on the weight ideally devoted for the cap. Generally speaking, and that is true for both, Navy and Army, the most efficient cap -penetrationwise- is the smallest possible one, providing that it succeeds in keeping the projectile intact.
The geometery itselfe is of little significance as long as there is enough metal in front of the nose (>.3cal).

That´s why the sombrero shape was initially useful, it optimized nose cap depth and corner angle while keeping the weight lower than a solid flat nose. And for Army purposes, the navy cap was good enough until the plate strength/thickness encountered on the battlefield increased so much, that ever higher striking velocities were required, under which the sombrero shape capped 7.5cm Pzgr rot failed to work.
The problem was reinforced by a shortage in critical alloys required to make good AP-shell steel, so that in the turn of 1941/1942, a serious research attempt had to be conducted on improving AP-projectile performances. I have the complete report here.

They changed a number of things: 1st, they reduced the size of the explosive cavity,
(2) then found the sweet spot in hardness for each calibre in a long series of trials (larger calibres are robuster than smaller ones, which also explains why large Navy APC didn´t encounter these issues before) and
(3) they needed to thicken the cap on 5cm Pzgr 39 and 7.5cm Pzgr39. This caused the emergence of the Army-type, heavy, flat cap as simpliest solution.
(4) The ideal cap-steel was made to the following alloy composition: C:.52%-.60% Mn:.70%-.90% Si:.70%-.90% Cr: .70%-.90% V:.12%

For projectiles which did not require very high striking velocities, such as the 7.62cm Pzgr 39 rot re-issued for medium velocity, captured soviet ZiS-3 guns, the lighter, sombrero shaped Navy cap was retained as it gave slightly better performances and the velocities were not high enough to facilitate a lot of projectile break up. Also the cap steel was made higher carbon but chromium free (C:.60-.70% Mn:.30-.50% Si:.30-.50%).
The larger calibre 8.8cm Pzgr39 was studied at the same time as the 5cm and 7.5cm but owing to it´s larger calibre and consequently lower stress levels, also kept it´s sombrero shaped cap (for FLAK and KWK36) but had all other improvements in hardness treatment and smaller HE-filler. When, however, the PAK43 and KWK43 high velocity guns were conceived, it took not long until notes were circulated in early 1944 requiring to introduce thicker caps for the higher velocity 8.8cm Pzgr 39/43, similar to those of the 7.5cm Pzgr 39 owing to problems with break up encountered at very high striking velocities and thicker plates than >200mm RHA. Only good projectiles, such as those made by B.V. or D.W. could obtain the full performance. Higher quality projectiles were designated Pzgr.39-1 and retained the chromium-rich cap alloy composition (see above).
B.V., which had little trouble to make high quality AP asked to simplify the design by providing a mild steel rather than a hardened cap but WaPrüf turned the manufacturer´s proposal down. The reasoning of WaPrüf was sound, in that not all manufacturers were as consistent and high quality as B.V. and that while it was true that a soft cap made little difference if the projectile hardness was Rc60-61.5, a soft cap would make an inferior projectile hardness (Rc59 or below) significantly worse than a hard one. It was also commented that hard caps were still considered superior to soft caps in overcoming high hardness armor, a type of armor which was frequently encountered on the Eastern front.
The change to the Army type capped 8.8cm Pzgr44 was never executed in mass production as they were yet trying to combine this change with a new, hemisspherical 0.5crh nose shaped projectile body. This flatter nose shaped projectile traded low obliquity performance for improved very high obliquity impact performance but attachment issues of the cap and nose turned out to be more problematic. Trials to find the optimum combination of nose and cap were -to my knowledge- not finnished by end of hostilities(?).

The even larger 105mm Pzgr rot initially had a sombrero shaped cap, which was good enough for 10.5cm L/52 medium velocity guns. But for the LÖWE project (>1000m/s velocity), they made comparative trials and issued a new 10.5cm Pzgr43 projectile, again with similarely deep cap type as the 7.5cm Pzgr39, though it retained the higher nose sharpness.

The 12.8cm Pzgr when capped was conceived entirely with the deep cap type (12.8cm Pzgr43), as by now, the limits of the thinner, sombrero shaped cap were clearly understood, also it retained the finer nose sharpness, because these larger projectiles were less stressed by impact.
Top

I have added a chart to examplify the cap development graphically.

Its very much a balancing thing, You first define target hardness, cal/plate ratio and obliquity and once these target criteria are settled, a given velocity will require a given % of cap weight, if the projectile from mass production is expected to remain intact. Higher velocity guns require larger, thicker caps, of course while low velocity guns can be ok, too, with projectiles without cap. Just please keep in mind that a good cap doesn´t necessarely translate into a better penetrator. Only if the projectile is strong enough, too, to negotiate the triaxial stress levels intactly.
You do not have the required permissions to view the files attached to this post.
Top

Amazing job, ciritalmass! Thanks for the long and detailed post. Good read.
Top

Glad You found my memo helpful.

The change to thick cap was executed for 12.8cm/8.8cm Pzgr. 39TS, due in part to the very high (>1200m/s) muzzle velocities conceived for this projectile. The 15cm/8.8cm Pzgr39 TS -for 15cm /low velocity gun howeitzers kept the navy sombrero shaped cap for the reasons outlined above.
You do not have the required permissions to view the files attached to this post.
Top

Although both projectiles are almost identical, the Pzgr.39/43 shoulder has been lowered by 6mm, for some bizzarre reason. The weight of the Pzgr39/43 is too light, and there is one driving band missing.
Plus, I think someone might have wrote "7" and mistaken it for "1" -it doesnt seem to be a Pzgr39/43
You do not have the required permissions to view the files attached to this post.
Top 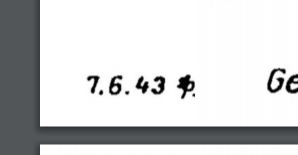 How many driving bands this shell supposed have? Three? Its the first time I hear about this.

Mea culpa. The driving bands are to be wider, and this is shown in the drawing. However, I don´t think that the fwd bourrolet sits lower in the Pzgr39. Both projectile bodies have the same length of 227mm and both have the same tangent ogive nose curvature of 1.47crh (130mm). Thus, a difference in level of fwd bourrolet is geometrically only possible if the end calibre is different, which we exclude safely.
The alternative would require a secant ogive curvature, which also is to be excluded from the drawings..
Top

No difference in externals between 8.8cm Pzgr. 39 and 8.8cm Pzgr39-1:
You do not have the required permissions to view the files attached to this post.
Top
10 posts • Page 1 of 1