Discussions on the vehicles used by the Axis forces. Hosted by Christian Ankerstjerne
136 posts

L/24Stug wrote: ↑
27 Apr 2019 19:21
K. Gr. Patr. rot Pz penetration is the same between 100 and 1000 meters @ 685 m/s m.v.
You know, it is an indication of proyectile deformation-shattering.
But what does it really means? German proyectile tests required intact penetration, ready to burst beyond the plate. Does it means it is possible that it indeed penetrated thicker plates but not in bursting condition?

Not exactly shattering but break up. One needs to be aware of the fact that projectiles have two curves of penetration. One for intact penetration (german "heil"), and one for broken penetration (german "grenz"). Originally, there was was a "Durchschlag" curve, which did not specify, whether or not the projectile is intact.
For high quality projectiles, such as the Pzgr.39, these two curves fall together over a very wide range of velocity and T/D ratios. For lower quality projectiles, there is a delta between both over a certain range. Sometimes, there is only a change from one mode to another.
When an inferior projectile increases velocity past the velocity of break up for a given T/D ratio, hardness and oblicquity, the projectile experiences enough deformation to not remain in effective bursting condition anymore (f.e. ww2 soviet AP projectiles, very generally). It will break up, or worse, shatter.
However, if You have a sufficiently capped AP and increase the velocity further, the projectile may overmatch the plate by virtue of excess velocity, that is the time domain, under which the excess force is able to "work up" the projectile is sufficiently short as to allow the projectile with only minimal damage to pass once the time domain is shortened enough to prevent full damage. However, this is only possible, if the projectile can avoid shatter. Shatter will rapidly fragment the projectile in a large number of small fragments, sometimes with the lower body relatively intact if shatter is confined to nose and shoulder, only. If the projectile can prevent shatter (having a cap helps here, but the body need to be heat treated to a sweet spot in hardness, too) and only suffers break up, it can penetrate if the velocity is increased further. But it would be inefficient and requires large increases of velocity. This is called the high penetration velocity sometimes. I am pretty sure, the K.Gr. rot Pz. is actually showing this effect due to the minimal increase in penetration over shortened range.
However, this effect is confined to a certain range of T/D ratio´s. It´s not infinite. So it is correct to perceive the maximum T/D ratio for a given projectile it can perforate at any velocity. Past that critical T/D ratio, increases in penetration will only break up the projectile further, actually lowering the penetration. For the 75mm K.Gr. rot Pz, this critical velocity was 700m/s (only good quality lots), for the 75mm Pzgr.39, this critical velocity was 1240m/s (again, only good quality lots), both at 30° and against 95 or 85 kg/mm^2 tensile strength plate.
Top

Peasant wrote: ↑
24 Dec 2018 12:16
I'd like to offer a correction: The russian historian, Yiri Pashlok was asked the same question when he mentioned these trials, and he answered that this gun was, in fact, not a tank version of the improved Mod1942 AT gun but a simplified design on the 45mm 20-K, altered in preparation to be used in T-70 tanks. I am inclined to trust this information, because, unlike some people (tan-khe-ar-khe-ives), in his articles he seems to provide complete, unbiased account of the events.

I hope that this thread is still relevant but I wanted to share this discovery: apparently the 20-k gun used in T-70 tanks had available, at least on paper, APCR shells: 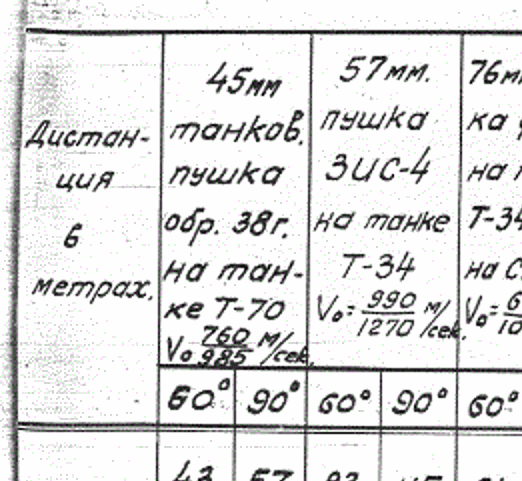 Valera Potapov of the old Russian Battlefield posted in 2002 in their forum that there were 45mm APCR. He gave penetration figures that now seems to be too high so it might be for the 45mm/L66 AT gun. The site that shall not be named had an article of two types of 45mm APCR. They seemed to have the same ballistics but the newer one had less dispersion.
Another site with what looks like reasonable data.
http://www.armchairgeneral.com/rkkaww2/ ... _tanks.htm
Top

Looks like I didnt need to search that far. The answer was under my nose all along. The firing tables for the 45mm M-42 gun have this helpful table: 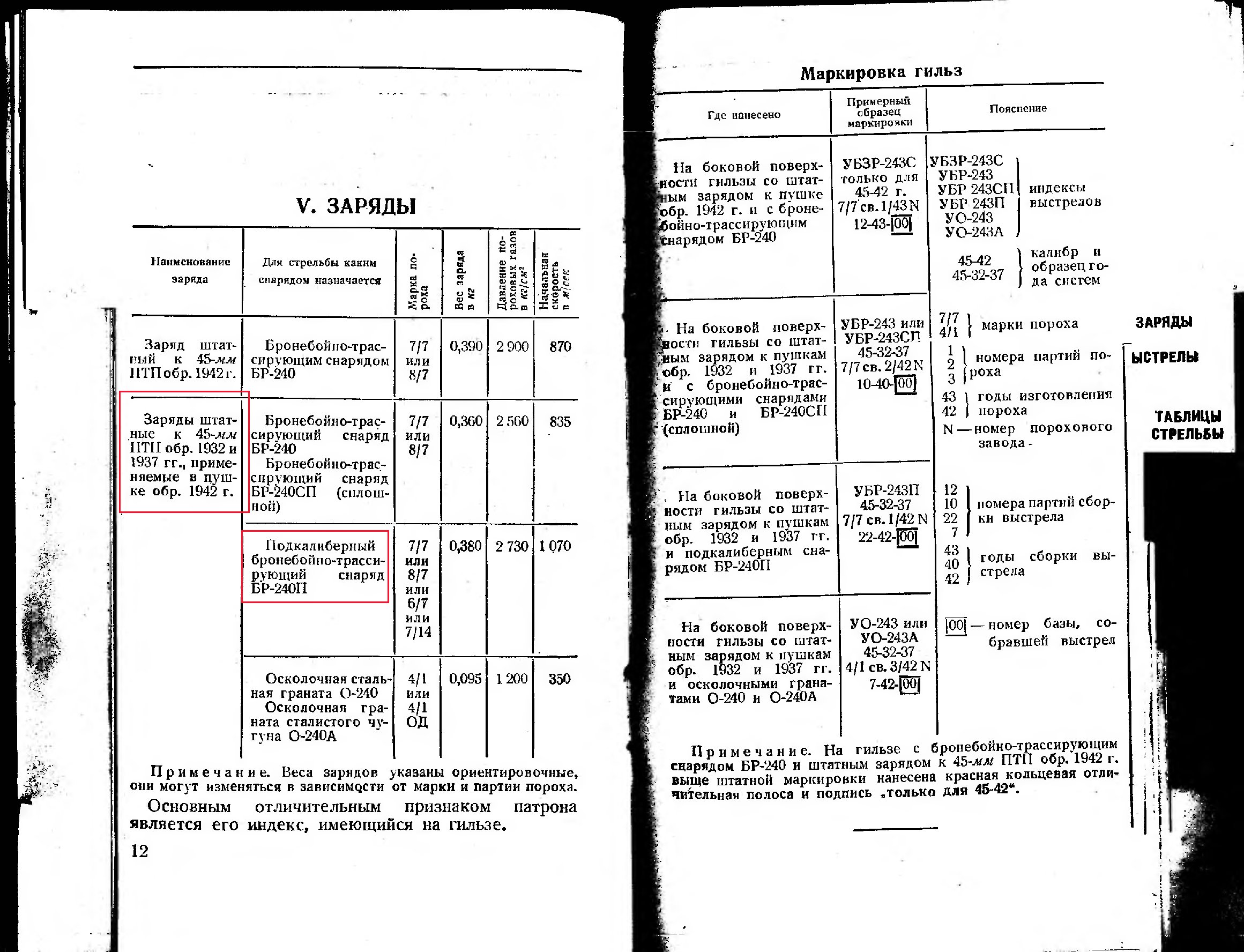 Yes, this is why I said round, not projectile. The ammunition for both guns had the same case and fired same projectiles, the difference was in the propellant load. The old rounds with 0,360kg load had the muzzle velocity of 760m/s from the older L/46 gun and 835m/s when fired from the M-42 gun with longer barrel. The new AP rounds with 0,390kg of propellant were supposed to have the muzzle velocity of 870m/s from the M-42 gun and were forbidden to be used in the older models of the gun, I assume because the hotter load generated more pressure (2900kg/2560kg/cm^2) and could blow up the breech.
Here is the relevant passage:

The only round with the subcaliber shell listed in the FT for the M-42 gun is one designated as: "Round with subcaliber AP projectile BR-240P and service load for the AT guns Mod.32 and 37". 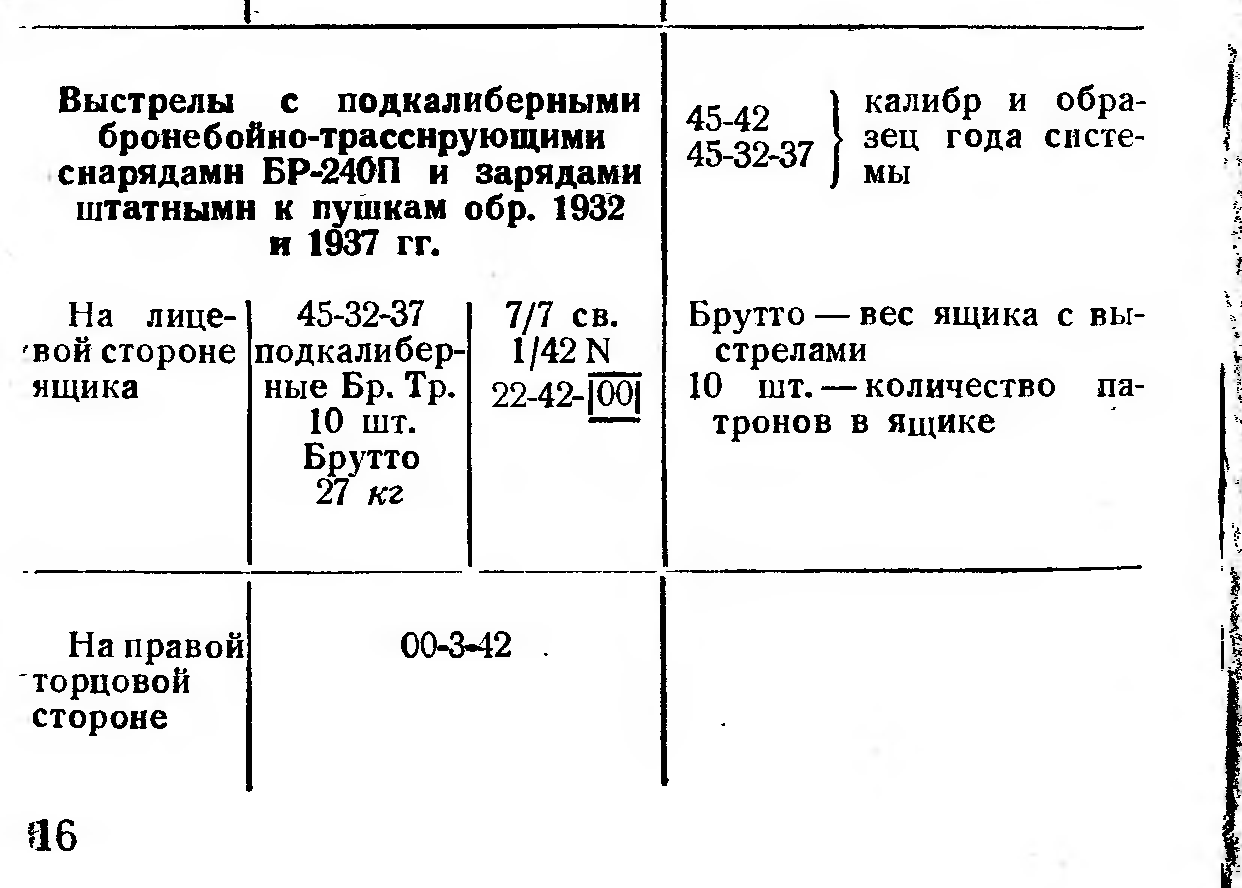 This is why I conclude that there was only one round for both guns, having the mv. of 985m/s (exact number unconfirmed by official sources, but most likely) when fired from a 45mm L/46 gun and 1070m/s when used in a M-42 gun.
Top

I see what you mean. The 835mm/s MV shell is an old model shell used by the Model 32.
So the APCR fired by that gun would be 970 m/s as shown here:
46mm KwK.jpg
Thus the same ballistic coefficient derived from this firing table would be used:

Russian 45mm M1942 APCR deviation.jpg
You do not have the required permissions to view the files attached to this post.
Top

On the matter of face hardened plates on Pz.IIIs: 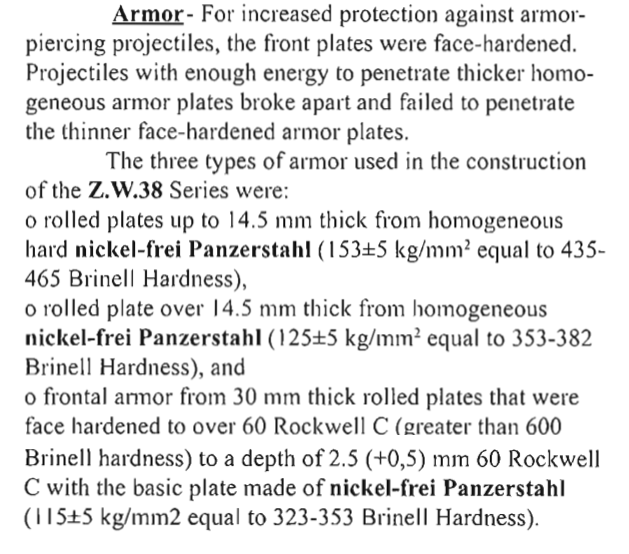 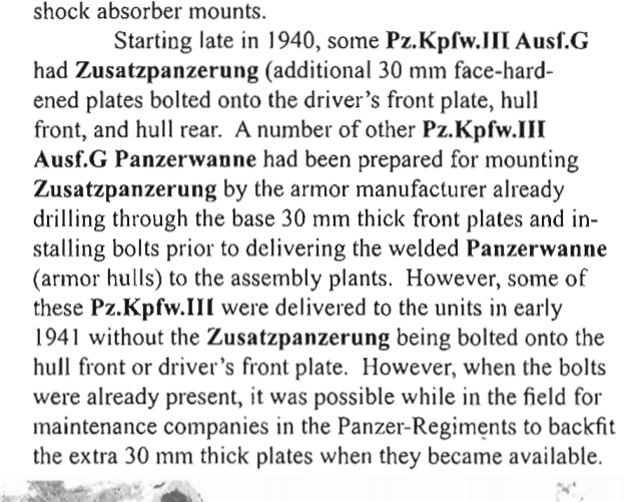 Important points here are: normally the Pz.III tanks with armour composed of 30mm plates used face hardened armour on the front and RHA on the sides and rear. Although it has been authorized to use face hardened 30mm plates for the side armour, since it is more difficult and time consuming to produce, I conclude that it was more of an exception that the rule for these tanks to have FHA on the sides.
Also, both the base plate and the add-on plate on Panzer III's front were made of FHA, this could be important to consider when assessing the performance of this array.
Top

Another thing: does anybody have info on the exact thickness of the glacis plate in Pz.IV G, H and J models? Panzer Tracts affirms that it remained 20mm/72° throughout the entire production history, but in an August '43 british "Preliminary Report on Pz.Kw.IV (Special)" captured in Afrika, it's listed to be 25mm/72°.
Top

Peasant wrote: ↑
26 Nov 2019 04:16
Another thing: does anybody have info on the exact thickness of the glacis plate in Pz.IV G, H and J models? Panzer Tracts affirms that it remained 20mm/72° throughout the entire production history, but in an August '43 british "Preliminary Report on Pz.Kw.IV (Special)" captured in Afrika, it's listed to be 25mm/72°.

The reason why I'm wondering is because a similar part, the highly angled plate on top of the driver's visor on the late Stug's has 30mm/72°. It is reasonable to assume that its supposed to provide protection homologous to the rest of the frontal armour which is 80mm thick and makes the vehicle pretty much immune to the 76mm AP shells from the F-34 gun up to extremely close range. Its hard to give an accurate estimate at these low T/D ratios and extreme obliquities but the data I have broadly supports that having 20-25mm/72° would leave a large weakened area right at the center of the front hull, vulnerable to the soviet 76mm gun, at ranges possibly up to 500-1000m.

Therefore it would make sense to introduce a 30mm glacis on the models already produced with organic 80mm of frontal armour, since the hull of the tank was not (yet) stressed as badly as the turret front and could take an extra few hundred kg in exchange for a big protection boost.
Top

The US 3"/76mm was able to penetrate the angled glacis on the Jagdpanzer-IV 70(A) at about the same range it could penetrate the upper hull.
You do not have the required permissions to view the files attached to this post.
Top

Didn't we have a discussion at another site about that damage? I recall finding a picture of the US troops salvaging the afv, and it did not appear to have that gaping hole in the highly sloped plate. Basically it was created in the museum for effect? No. it seems to be in the B&W photo. Between the fender and the transmission cover plate little hood (?). Somewhere along the line the right hood went missing.
Top

This is a close up of the museum vehicle. The little hood is actually a vent/handle that should be on that hatch. 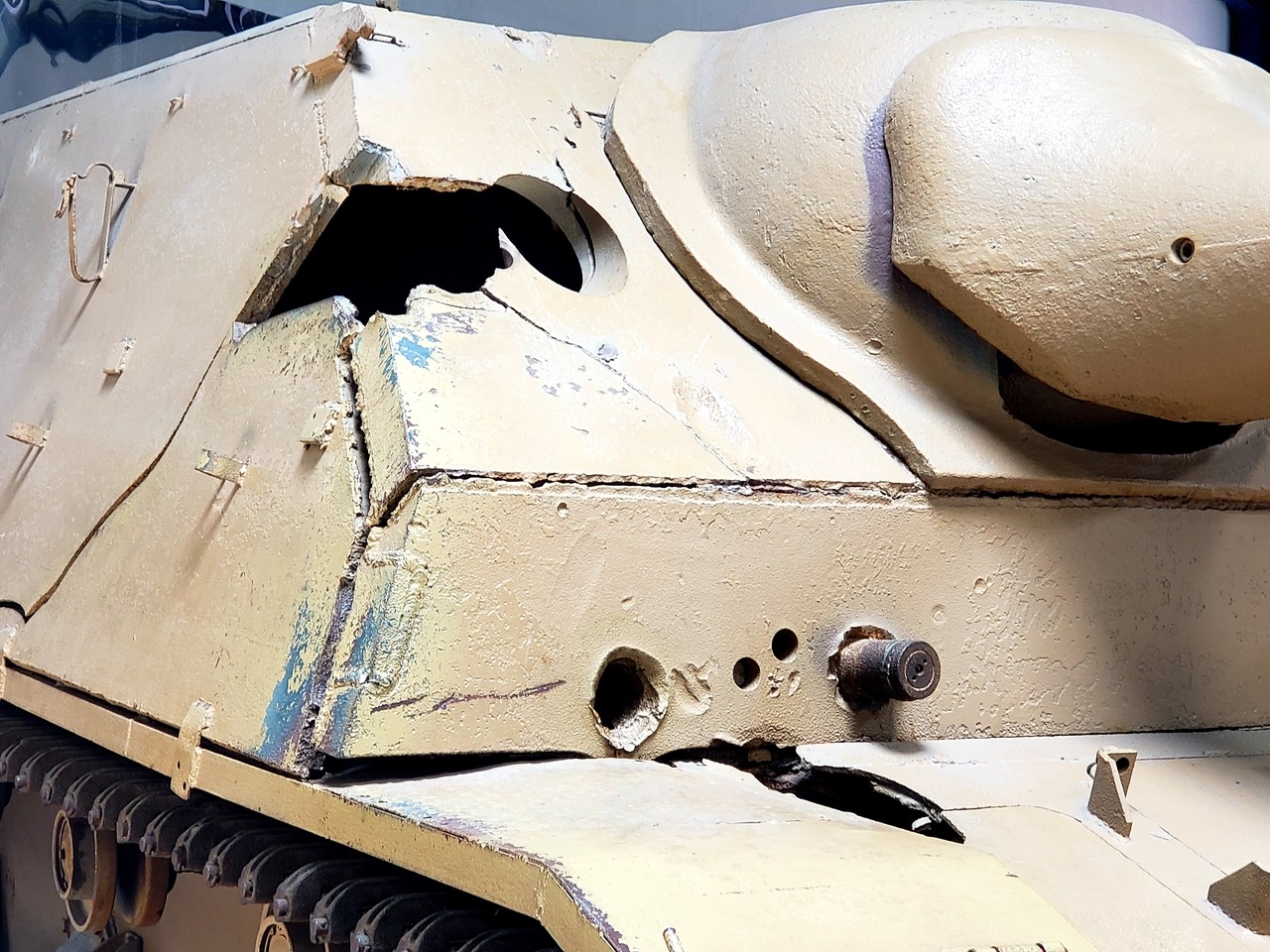 But the 'handle' is also an cooling opening in that hatch. The hinges also, do not match. The driver side hinges are the correct armored type.