Discussions on the vehicles used by the Axis forces. Hosted by Christian Ankerstjerne
19 posts

Webpage has photos of capture and loading on trailer of 332 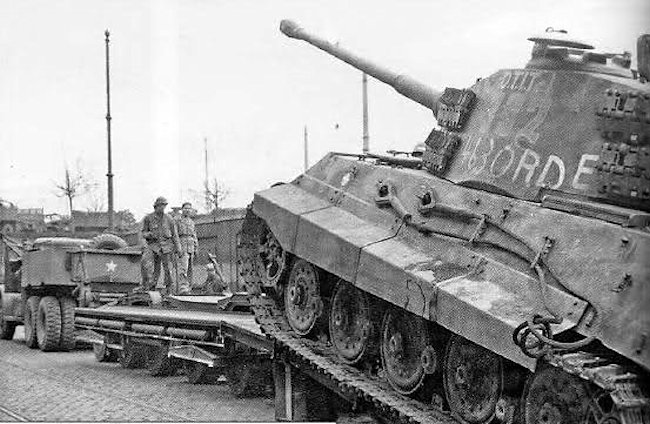 TL 6321 for P-Farben listed the base colors that Henschel and other panzer makers used. Here are the December 2,1940 TL that lists RAL 8012 as the factory primer color and the famous early war RAL 7021 that was the basic color then applied over it. the April 1,1943 TL 6321 lists RAL 7028 as the basic color to be painted over primer RAL 8012. Factories were allowed to use up the first so-called Dunkelgelb before RAL 7028 would then be used. For example Ferdinands appeared in combat July 1943 painted with the first version of Dunkelgelb while Panthers had RAL 7028 as their basic color.
You do not have the required permissions to view the files attached to this post.
Top

RAL 1006 yellow. I have no document stating it was to be used as a 1944 Tiger unit's outline color for numbers. When a Panzer unit had paints out of stock, who can say what other colors might be used at various times.
You do not have the required permissions to view the files attached to this post.
Top

Photos taken near Kassel Germany in 1946 showing one of the last Tigers to be painted near the end of WW II. After the first one below appeared on the cover of AFV News Jan-Apr 1990 in relation to an article on pages 4-9 written by Bill Auerbach, I wrote him and received prints. On the color photo below, RAL 6003 and RAL 7028 appear with the orange-red of rust.
You do not have the required permissions to view the files attached to this post.
Top
19 posts