Discussions on the vehicles used by the Axis forces. Hosted by Christian Ankerstjerne
6 posts • Page 1 of 1 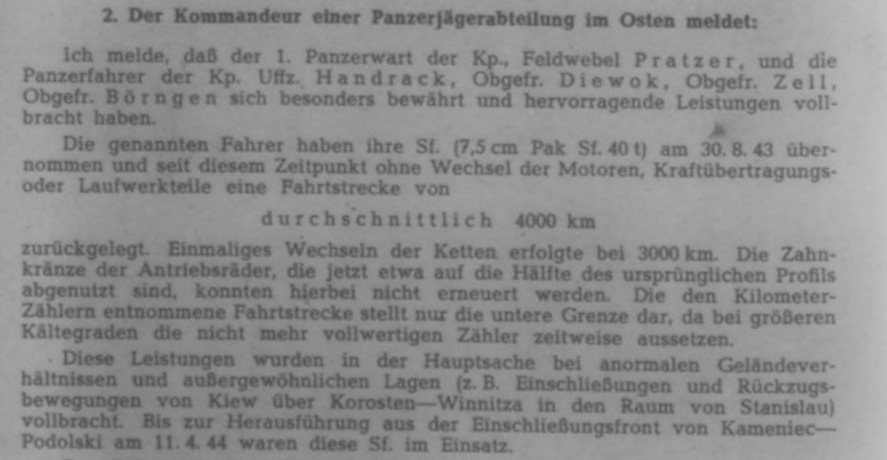 Perhaps the "t" isn't referring to tons but to the nationality of the chassis, Tschechoslowakei; ie. Marder III?
Top

"t" may identify Marder III.
Message ist not for a single vehicle but at least four vehicles. The first person mentioned is the maintenance (sergeant? officer?) of the company and the four others are drivers.
Top

I agree, most likely a Marder III, i.e. a Pak 40 on a t(=czech) chassis.
the 38(t) chassis was well liked for its automotive maturity as early as 1940 in Rommels 7. Panzer-Division.

Ulater, please state the exact source of your screenshot for the benefit of forum users.
I presume "Nachrichtenblatt der Panzertruppe"?
Top

Excerpt from chapter 10-IX appeared in the 'Nachrichtenblatt der Panzertruppen' Nr. 12 published in June 1944 and which refers to the excellent performance of a mechanic as well as several conductors of self-propelled guns' 7.5 cm Pak Sf 40 t '

Note :
Based on the generic denomination used ('7.5 cm Pak Sf 40 t') it is very likely that it will be 7.5 cm Pak 40 guns on platform based on the Panzer 38t chassis. It should be noted that since the beginning of February 1944 the official denomination of the different versions of self-propelled canons had been simplified and all versions had been grouped under the Marder I / II / III denomination. As can be seen in this document, published in the same official bulletin of the Armored Troops in June 1944,

(German to Spanish to English....)

The commander of a Cazacarros Battalion in the East reports:

The drivers named above assumed their self-propelled guns (7.5 cm Pak Sf 40 t) on 30.8.1943 and since then until now they have traveled an average of 4,000 km without having made any engine changes, transmission components or system rolling. The only change of chains was made after 3,000 km. The gearwheels of the tractor wheels, whose profile has now worn halfway, have not been replaced. The distances traveled, read from the odometer, represent a minimum,

These yields have been achieved on a terrain of special characteristics and in exceptional situations (eg fences and withdrawal movements from Kiew to Korosten - Winnitza in the Stanislau area). The self-propelled guns have been operational until they were released on 11.4.1944 from the siege of Kameniec - Podolski.

The self-propelled guns are currently in a state where they can still be moved and transportation to workshops in the homeland has been planned to be repaired there.

Within the Company there are two more self-propelled guns with the same mileage but where the engines have already been changed.

The 1. Mechanic of the Company has contributed greatly in achieving this performance.

The opinions on these vehicles, depending on time frame and the end-users, varied quite a bit. Like in most AFV matters, crew training also varied. But they were needed, according to one report, if nothing else but due to the lack of tugs (halftracks) for the Pak 40.
Top
6 posts • Page 1 of 1