Discussions on the vehicles used by the Axis forces. Hosted by Christian Ankerstjerne
6 posts • Page 1 of 1

Please find attached the snythesis of Miles data from above.
the late war electro smaleted E19 material for 35-55mm thick plating (in red) has increased non metallous alloying (silicon and manganese, both of which were not critically short ressources) but reduced chromium content (a critical ressource), compared to mid war E22SM (cast by Siemens Martin open hearth in a special duplex process, which achieved almost the same clean steel as electro resmelted). Because chromium is an effective hardening agent, the loss in hardenability caused by the lower allowance of Cr in E19 was counteracted by a slight increase in carbon and silicium content. Both armors were virtually free of any Nickel (reserved only for thicker section thicknesses, where it was needed to provide toughness).

This is a low alloy armor steel. It posesses enough hardnebaility from its chemical analysis. However, because of the increased carbon and silcium, it also requires careful controll of heat treatment times to prevent embrittlement of the hardened product.

The proof of plate minimum acceptance curves show that E22 (blue curve) offers more resistence at low impact obliquity, while the E19 (red) offers increased resistence at high impact obliquities. This is shown by the lower thickness of plating required to prevent holing or crack through against this projectile (german angular definition, 90° = perpendicular to the plate):
Lower impact resistence of rolled, homogenious armor at low obliquity is often positively correlated with increased levels of resistence at high obliquity, as well as increased resistence vs larger calibre projectiles, so this interpretation reconfirms what has been known from other sources.

Context is important in judging this product. If only tested for at normal impact, E22 would be rated superior and the lower resistence of E19 would be mistaken as an indicator of reduced late ww2 armor resistence, particularely with the lower Cr content. However,because late in ww2, most armor applications in this thickness range specified the need for increased oblique impact resistence (think of Hetzer and JP plates, or general tank and turret side plates in this thickness), E19 was naturally the better option to go with. It offered a higher degree of ballistic resistence under more acute obliquities and also safed critical ressources. A testiment for a good application of metallurgical knowledge.
You do not have the required permissions to view the files attached to this post.
Top

I've converted the performance shown to that of a 4cm 1,08kg shell to estimate the protection provided against british 2pdr AP.
Secondly I've made short range extrapolation from the known data points and compared them to the 2pdr results against british MQ RHA at obliquity. 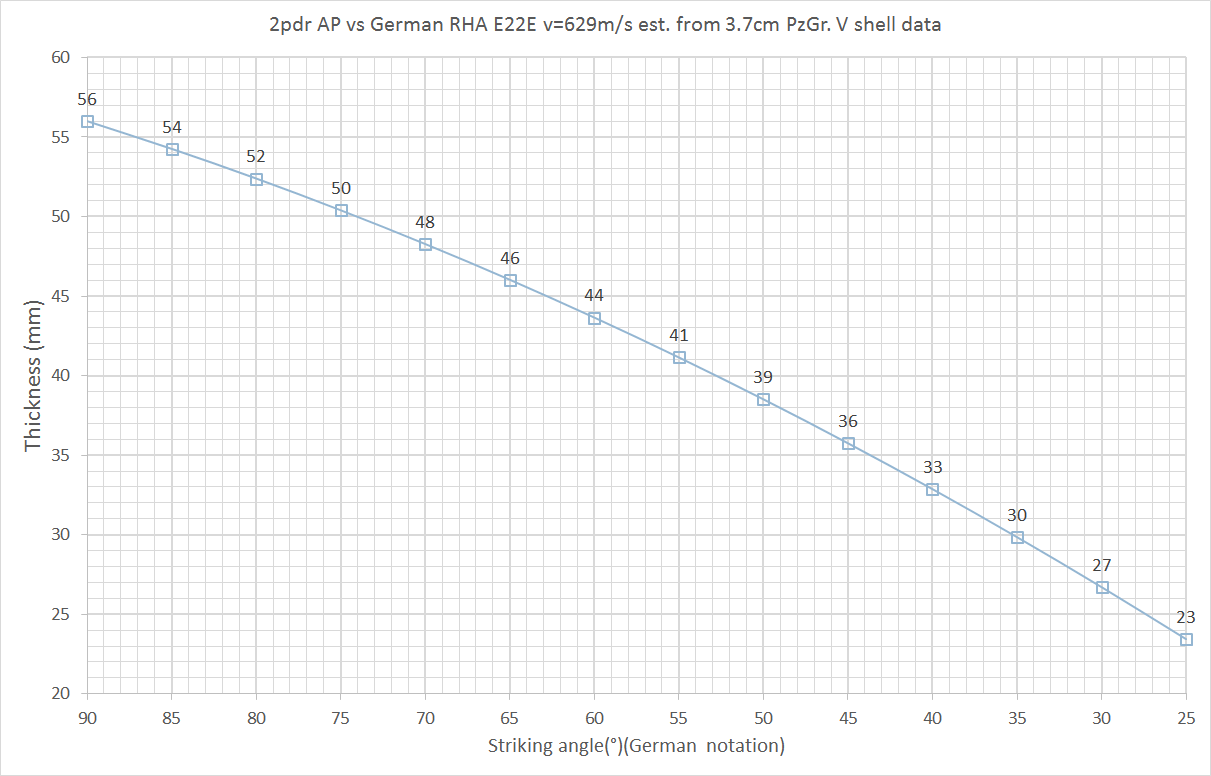 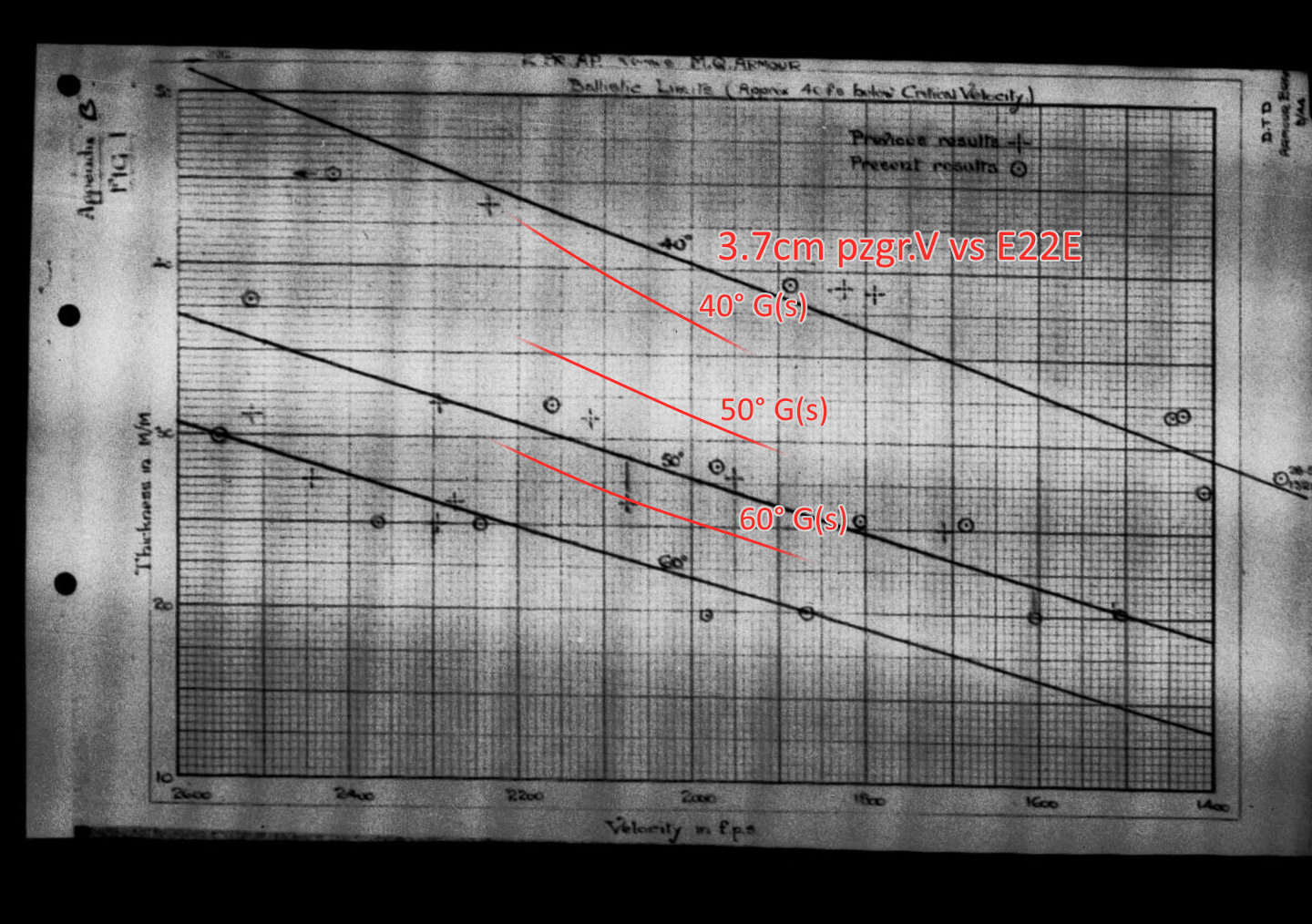 Just a question are the mechanical properties known for E19 and E22?

In a very superficial consideration of mine E22 posses somewhat lower Ultimate Tensile Strenght but higher elasticity on impact of a projectile.

Thoddy, I am not convinced that E22 has lower UTS than E19. E22 has either the same or higher ultimate tensile strength in the realm of thickness, where E19 is produced, too.
From Miles graph above:

E22E and E22SM hadly slightly different strengths in thicknesses 55-80mm, but in those section thickness range, E19 isn´t produced, so a comparison cannot be made.

Ballistic proof (Gs) requirements for E19 and E22 indicate that E22 is offering more resistence at normal impact, while E19 offers higher resistence at oblique impact, which agrees with the data above.

In general, E19 has more carbon content, which offers more hardenability but also more suspectability to embrittlement due to the raised % Si. E22 has more chromium, which also increases hardenability and greatly improves through-hardnebaility (better for larger thicknesses), hence E22 is employed for larger section thicknesses, where its also treated to somewhat softer tensile strengths.
Top