Discussions on the vehicles used by the Axis forces. Hosted by Christian Ankerstjerne
3 posts • Page 1 of 1

In the KStN including the Sd.Kfz.10/5 it is unclear if the ammo trailer is just present if they use 2t trucks instead or also with the Sd.Kfz.
So was the trailer also used with the 10/5?

I am not sure that I have well understood the question. 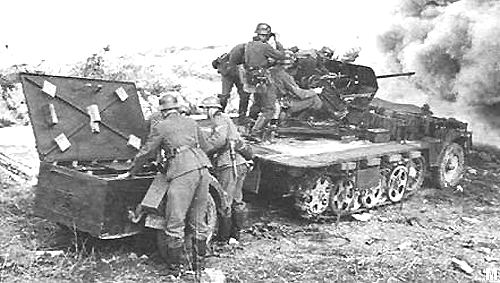 But could it also simply be the Sd.Ah.51 trailer dedicated to the 2cm Flak ?
Both are called Sd.Ah.51.

Universal Trailer Chassis Sd. Ah. 51 and its heavier version Sd. Ah. 52 were widely used through all the WWII. Originally intended to tow light Anti-Aircraft guns, such as 2cm. FlaK 30, FlaK 38 and Flakvierling, it were later converted into Cargo Trailers of different size and purpose. Most often it were issued to motorised FlaK Battalions, equipped with Sd.Kfz. 10/4, Sd.Kfz. 10/5 half-tracks mounted A-A Guns, or, for instance, with Flakpanzers I. These vehicles' chassis were overloaded, so Cargo Trailers on Sd. Ah. 51 chassis were used for transportation of spare barrels and ammo for FlaKs, and personal stuff of the crew.
From : http://www.leadwarrior.com/Lw35011h.htm

So if there is only the Sd.Ah.51 indication I think it could be either the Flak30/38 towed by a regular truck or a SP-Flak with an Sd.Ah.51 ammo trailer ?

Thanks very much the photo answers my question. According to the KStN I was not sure if they used the Sd.Ah.51 (ammo) just with the trucks they used instead the Sd.Kfz. or also with the Sd.Kfz.