Discussions on the vehicles used by the Axis forces. Hosted by Christian Ankerstjerne
18 posts

Can you post some images of "Fehrmann" Panthers too please

From Missing Links....These images show part of the KG KO'd around the eastern outskirts of Bückeburg, near Bad Eilsen - about 65km northeast of Paderborn training grounds on the 11th of April 1945 by armour of the US 5.Arm.Div. where they lost 2 Tigers, Schulze's Panther and 2 halftracks in the process..... 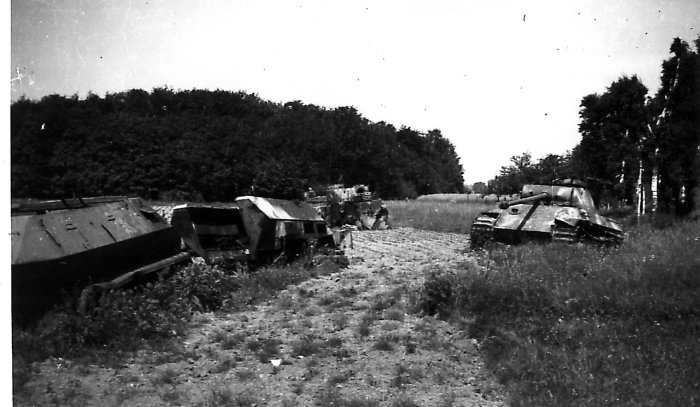 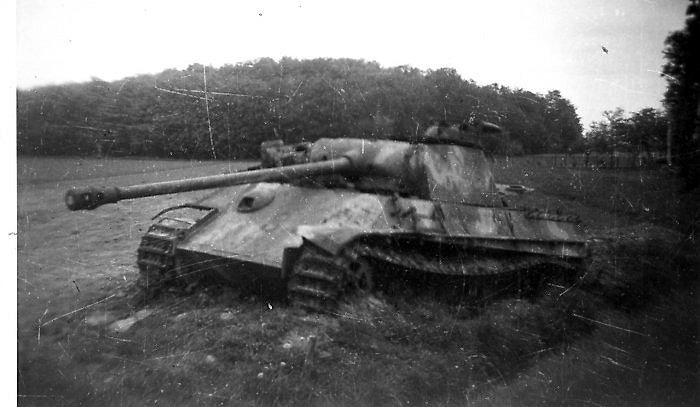 F01 and 13 were hybrids of early type and steel roadwheels, while F02 is a typical early type, with rubber-rimmed wheels.

F01 was frequently misidentifed as F02. It is interesting to look closely at the picture. You will find a panzerfaust in front of its left track. F01 was also featured with its absence of hatch stopper in commander tower.
Top

Some of the previous postings seem to believe the tanks of Kampfgruppe Fehrmann must have been numbered consecutively, and have queried the number of tanks involved (6 Tigers = 5 Panthers = 11 tanks, yet photos show Tiger F13 etc.). However Gruppe Fehrmann would have followed normal German numbering practice for their Tigers, which is what has led to the confusion in some quarters.
Panzer Divisions, including Tiger units were organised into Regiments, Batallions, Companies & Platoons.
For our purposes all we need to look at is the Company structure, with a pair of Tigers for the company HQ platoon and then four Tigers per 'combat' platoon. Normally the three-digit turret marking would indicate the tank's company, platoon, and position within the platoon - thus 123 would indicate the third tank within the second platoon of the first company, while 211 would indicate the first tank (ie the platoon leader's tank) of the first platoon of the second company and so on. Under this system the numbers 101 and 102 would indicate the two tanks belonging to the Company HQ.

As Fehrmann was operating as a Kampfgruppe his initial replaced the first (Company) digit of the turret numbers, giving his unit the following numbers: F01 & F02 - Kampfgruppe HQ, with F01 being Fehrmann's Tiger as Kampfgruppe Commander, and F11, F12, F13 & F14 making up his 'combat' platoon of Tigers.
IF the Panthers were marked up as belonging to the Kampfgruppe after being attached they would have formed the second platoon with the numbers F21-F25, however as far as I am aware, no record exists to indicate that the Panthers were so marked - there may well not have been time to do so - and most accounts agree that the highest turret number noted was either F13 or F14 - which is what you would expect if the Panthers were not marked up in the same manner.
Top
18 posts