Why did Germany use inverted engines?

The advantage of an inverted aero engine is that the crankshaft is further off the ground. This permits a larger diameter propeller than would otherwise be possible, allowing a smaller, lighter, cheaper undercarriage, and other structural and cost benefits. Small British aircraft Eg: De Havilland Tiger Moth used inverted 4 cylinder engines. The Spitfire went from a cheap simple 2 blade, to complex and expensive 5 blade props to use the massive increase in engine power within the same diameter of props.
Top

That is true for small ungeared engines, like the Argus As 10.

But the DB 605 has a gearbox, which moves the propeller down, in fact the Merlin seems to have here the advantage. 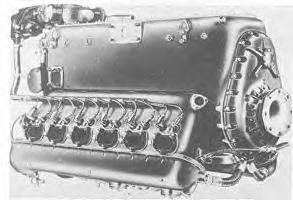 The inverted V-engine is narrowed at top, which could provide a better visibility especially in landing.

which could provide a better visibility ... in landing

The strange thing is - it didn't in the case of the Bf109. Adolf Galland, who had the opportunity to fly BOTH the 109, and on several occasions postwar the Spitfire, commented that even the Spitfire, which had its own reputation for the straight-ahead line being obscured until the tail lifted...had better visibility than the Bf109! IIRC Gunter Rall made exactly the same comment.
Top

Flugkäpitän Willy Ellenrieder who flew the DB 605 A-1 engined Spitfire Vb conversion attributed the Bf 109's bad visibility before the take-off to its nose pointing skywards on the ground. According to him the DB-engined Spit had a far better visibility because of the shorter legs of the front undercarriage; "Flying Review International, 9/1966".
Markus
Top

I wonder what visibility they are talking about because when the tailwheel is still on the ground there simply is no visibility....

...except this wasn't as much of a problem on the Spitfire and Hurricane with their sliding-backwards-to-open canopies; a pilot would "weave" while hanging his head out of the cokpit to one side, thus looking "past" the engine installation, and getting to see "straight ahead" when he weaved. The Bf109's side-opening canopy obviated this solution for the engine installation on the German fighter.
Top

phylo_roadking wrote:...except this wasn't as much of a problem on the Spitfire and Hurricane with their sliding-backwards-to-open canopies

...and with inverted engines would have been even less problematic.

Of course you can´t get the full benefit of the potentially better visibility of the inverted V-engine, if you don´t shape the nose after the engine.

In slow speed taxi you can zig-zag or put your head out of the cockpit to improve visibility, but that is not possible in take-off or landing.

A tail-wheel aircraft is usually landed on three wheels, otherwise the landing distance is longer. You have to approach at the same nose up situation as you taxi, but at greater speed and maybe to an unknown landing strip.

The decision to opt for the inverted V-engine was made already in the early 30's. The landing is the most dangerous part of a flight in peace time and I think in landing you could at most benefit of the better visibility.
Top

Certainly when RAF fighter pilots drifted their machines in and brought the nose up for a standard RAF "three point landing"....they lost sight of what was ahead of them

I would assume that BF109 pilots had the SAME issue...but obviously, when it came to landings they had far worse problems to deal with in the shape of the groundlooping issues than mere visibility!

But those issues are not uncommon for the spitfire aswell


All Spitfires are exceptionally easy to land with no inherent tendency to swerve or groundloop. Just reduce power to idle, flare to a three point attitude and she sets down on a feather almost every time. This is a great surprise to most considering the narrow track undercarriage and full swivel, non-locking tailwheel. Why doesn't it drop a wing violently or make the pilot stomp on the rudders? I wish I knew. The genius of managing to combine light aircraft characteristics with such high performance is nothing short of miraculous compared to most other wartime tailwheel types.

BUT...groundlooping wasn't totally unknown for ANOTHER reason....completely unrelated to the BF109's endemic issues. It was possible to groundloop a Spitfire because "goosing" the Merlin engine when taxiing was how pilots were taught to make it weave as mentioned above! I.E. the pilot was edging on a torque-induced groundloop, different from the 109's centre of gravity issue.

And certainly the Spitfire's "abilty" to groundloop wasn't as pronounced as other types - the Harvard trainer for example was prone to it, it was a standing joke among trainees.


A tail-wheel aircraft is usually landed on three wheels, otherwise the landing distance is longer. You have to approach at the same nose up situation as you taxi, but at greater speed and maybe to an unknown landing strip.

Actually...this isn't the case for the Bf109. The 109 "landed long"...because at landing speeds with the nose up for a three-point landing, the 109 was actually in stall. The 109 had to make main-gear landings then come down on the tail.
Top


However after lowering the tail to the ground, you have to be positive and quick with rudder inputs as with no steerable tailwheel and no slipstream over the tail (throttle closed), you have to dance on the rudder a bit to keep her straight. With that narrow track undercarriage, any swing must be stopped quickly, or it could fast develope into a ground loop. Can get interesting in a crosswind


However, this had one major drawback — this landing gear arrangement ensured a narrow wheel track making the aircraft laterally unstable while on the ground. To increase stability the legs had to be splayed out, creating another problem in that loads imposed during take-off and landings were transferred at an angle up the legs. The small rudder of the 109 was relatively ineffective at controlling the strong swing created by the powerful slipstream of the propeller and this sideways drift created disproportionate loads on the wheel opposite the swing. If the forces imposed were large enough the pivot points often broke and the landing gear leg would be forced sideways into its bay. [17]

Because of the large ground angle caused by the long legs visibility for the pilot, especially straight ahead, was very poor, a problem exacerbated by the sideways opening canopy. This meant that the pilots often had to "snake" the aircraft during taxiing manoeuvres, which again imposed stresses on the splayed undercarriage legs.

Although it has been suggested that from 5–33% of all 109s were damaged or destroyed in this way, the Luftwaffe's loss records show that approximately 1% of the Bf 109s had suffered landing incidents or accidents at the beginning of its career, a figure comparable to the other monoplane fighters introduced at the time. Ground accidents were, however, more of a problem with rookie pilots, especially during the later stages of the war.[18] Even experienced pilots, especially those who were tired, were caught out. Most Finnish pilots report that the swing was easy to control, but some of the less experienced pilots lost fighters on startup.[18] As more powerful engines and larger propeller blades were used the swing became more pronounced, although the provision of a fixed "tall" tailwheel on some of the late G-10s and 14s and the K series helped alleviate the problem to a large extent.

When the swing began on the 109 and it dug in on one wheel...if the strut didn't collapse, once that strut reached vertical the groundloop was unrecoverable as the mounting point of the strut was so close to the centreline and centre of weight of the aircraft. It would thus over-centre and loop far more easily or readily than the Spitfire. I didn't say the problem was unknown on the Spitfire, the later high-power and Griffon-engined marks were "squirrelly" because of the high torque - your quote actually gives the instructions for avoiding it


The 109 had not for us, maybe not for the long time pilots of the 109, but the new comers had problems starting with the gear. You know it was a high, narrow gear. And we had many ground loops. And then the gear breaks. That is not a norm, this is a exception, but it anyway happens.


4.13. Landing. – This is definitely more difficult than on the Hurricane or Spitfire, mainly owing to the high ground attitude of the aircraft. The aircraft must be rotated through a large angle before touch down, and this requires a fair amount of skill on the part of the pilot, and tempts him to do a wheel landing. If a wheel landing is made there is a strong tendency for the left wing to drop just before touch-down, and when the ailerons are used quickly to bring the wing up they snatch a little, causing the pilot to over-correct.


4. The controls are well balanced and the aircraft is pleasant to fly, but is
not so easy to take off as the Me.109E. The elevator control is fairly heavy
but the rudder control is light and is effective even at low speeds, the aircraft
being very sensitive to over-correction on the rudder during take-off. The
Me.109F is not as easy to land as the Spitfire, altough it is a little easier
than the Me.109E, due to its slightly better forward view

You're aware it was an undercarriage collapse when it drifted onto soft ground and subsequent groundloop that wrote off "Black Ten" at the ILA in Berlin last year?
Top

I can understand why Spitfire pilots would like (and know) their aircraft better than an aircraft (109) that they would fly for the first time without propper being instructed!
Still the swing at landing and take off is a "feature"for the Spit (also with early marks!!!) as well and both could be avoided with the Spit and with the 109 (see my post and see your post) and has more to do with both aircraft narrow landing gear.
So i really don't see a point in high COG with the 109 altough i guess it would make it a bit worse!

Back to the initial subject of the post, inverted V engines, I've never seen a good reason for or against. The US, in particular, had all kinds of experiance with upright auto engines and most of their aero engines were similar. But they still had the Ranger family of inverted Vs. And there were advanced inverted Vs being developed (but not proceeded with) for WWII. The Brits also had their upright Vs, and a few inverted projects, as well as crazy things like coupled flat opposed (Napiers!).

A mystery until we can get some serious engine engineeer on this.
Top
63 posts