Is this a photo from a real battle or training? (Wehrmacht)

Discussions on all (non-biographical) aspects of the Freikorps, Reichswehr, Austrian Bundesheer, Heer, Waffen-SS, Volkssturm and Fallschirmjäger and the other Luftwaffe ground forces. Hosted by Christoph Awender.
3 posts • Page 1 of 1

Is this a photo from a real battle or training? (Wehrmacht)

Hello, I discovered this epic photo online and after doing some research about it, I found it came from the "Die Wehrmacht" magazine (originally I found the image without any text). 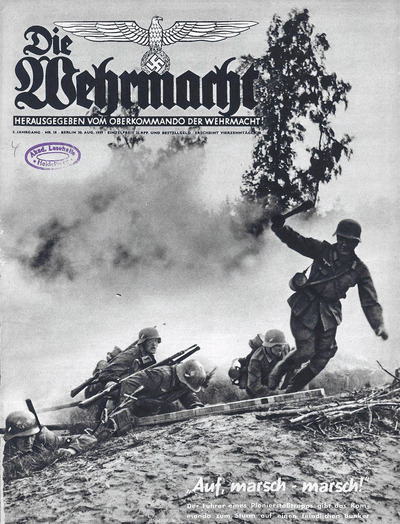 This photo was included as the central photo of the 18th volume released in August of 1939.
Please see the link below, it includes most if not all of the pages within it.

I was curious so I used a few translator programs and manually typed in most of the main paragraph (see attachments for full rough translation I did for the first paragraph). It says:
"The reporters of the "Wehrmacht" had the opportunity to see an exercise of the pioneer training battalion in Dessau-Roßlau (urban district), and saw that the fighting spirit and the aggressive bravado of the battalion "Rohr", whose tradition the battalion carries on, is alive and well in the troops today. The pictures show the participation of the sappers in a part of the attack on a shipyard, which was built on the site of a foreign fortification. The pictures show a part of the attack on a shipyard, which was reconstructed on the basis of a foreign fortification."

So it both mentions it's an "exercise" but later says it's "attack on a shipyard" (I think shipyard was meant to be "bunker").

Does anyone have any more info on whether this is from a real battle or just a training (especially for taking pictures like this to use as propaganda and such)?


(Additional website with information on the magazine volume)
https://collect-militaria.com/3273-die- ... -1939.html
You do not have the required permissions to view the files attached to this post.
Top

Re: Is this a photo from a real battle or training? (Wehrmacht)

If it's the August 1939 issue, then it must be training, as the war hadn't started yet.
Top

Re: Is this a photo from a real battle or training? (Wehrmacht)

Ah thank you. I suppose I let that fact completely fly over my head, I was so focused on the magazine since the photo looks like a real battle.