Thanks for clearing that up - much appreciated.

Next time I go back I will have some stuff with me to clean up the leaves and have a better idea of the concrete aiming slab.
Top

The Crombeke site with the Richttent is similar what was found by SES, have a look here:

Any one ever seen or heard of this booklet:

Some info on the subject here - warning some disturbing pictures are shown!!

Hi Kurt,
Very interesting book you found there. Please note leaflet nr. AI-078-6-44 depicting the Tower Bridge. That was the German Desired Mean Point of Impact (DMPI) when the intended target was Greater London. Dispersion caused by the forecast wind and mechanical errors caused the missiles to fall over a greater area.
bregds
SES
PS. Were V-1s ever fired from the Fw 200 ??????????
Top

Hi Kurt,
Thanks a lot. I was thinking in terms of operational usage from the Fw-200. AFAIK the V-1 was only air launched from He-111.
bregds
SES
Top

Not operational, I think this was the only time

Thank you for sharing this booklet Kurt. Never knew there were so many different leaflets about the V-weapons.

At the moment I am reading the book from Remy Desquesnes "Les armes secrètes d'Hitler". Nice informative book that I found in the bookstore at Mimoyecques site.
And the following small books/leaflets I bought on eBay. A lot of reports of witnesses from the time. 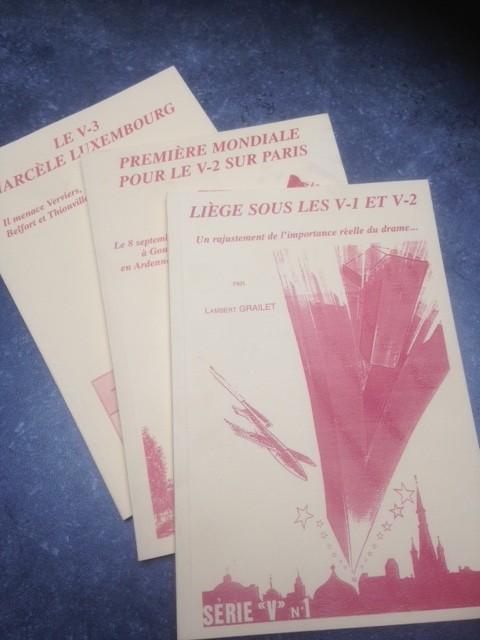 Maybe already known to you but nevertheless interesting :

III./KG 3 was reformed on 6 February 1944 near Lublin, Poland. It was trained to use the Heinkel He 111H-22 in night operations, as a weapon platform, for the V-1 flying bomb (FZG 76). It began this operations in late June 1944 under Fliegrkorps IX from Venlo and Gilze-Rijen in the Netherlands with nine He 111s.

On 7 and 9 July it launched V-1s at Southampton and London respectively. From 18 to 20 July it launched approximately 50 V-1s. It may have flown a last sortie on 5 October 1944, but may have been in the process of disbanding. It was subordinated to Gefechtsverband Hallensleben. It had lost four aircraft by 20 October to RAF night fighters. The groups ranks had swelled to 25 He 111s by 16 October. According to sources, from 7 July—20 October 1944 it launched around 1,100 V-1s but 40 percent failed. There is no further mention of III./KG 3 activity.

Wonder if this wasn't used as informational film for the trainees before going into action?
Top

I know it exists out there, but I think it describes the late (1944-45) type of light V1 launching sites, right?

Is there anything like it for the early heavy sites as well?