Discussions on the foreigners (volunteers as well as conscripts) fighting in the German Wehrmacht, those collaborating with the Axis and other period Far Right organizations. Hosted by George Lepre.
1 post • Page 1 of 1

William Dudley Pelley is significant as a WW2 era historical figure for any number of reasons. Not least, I think, because he served one of the longest sentences in the US for wartime sedition. Sentenced to 15 years in 1942, primarily for promoting insubordination in the US armed forces through distribution of his publications, he served exactly half, seven and a half years, and was released in 1950.

When the 1944 Mass Sedition Trial rounded up dozens of nationalist pamphleteers, Pelley was indicted again though already serving sentence for near identical charges resulting from his personal case. The mass trial was a conspiracy show trial staged to intimidate any critics of four-term Franklin. WDP was hauled in to the fracas to pollute the jury's opinion of the other defendants, having already been found guilty. It was a circus and ended in a mistrial with the judge overseeing the case reprimanding the prosecutors and labeling the whole affair "a travesty of justice."

I have studied Pelley for over 25 years and have considerable collection of his books, magazines, propaganda and ephemera.

Perhaps you've heard of his Silver Legion of America aka Silver Shirts (1933-1940). I have acquired a considerable collection of unpublished photos of those guys which are quite rare.

All to say, I think I have the background and the source material to keep my newsletter devoted to Pelley up and running, and interesting to obscure US history enthusiasts, for some time to come.

I will cover the varied aspects of his career, but my essay from 1995 'Christ's Men in Silver Raiment' is a good introduction. Much better than most sources to be found online, I might brag. It is the lead article pinned at the top of the contents page and the image of Silvershirts lined up for muster in front of their Silver Lodge in Redmond, WA is alone worth the click.

Here is an internal memo between FDR and J. Edgar Hoover which amounts to the order to shut Pelley down, issued in January '42, shortly after Pearl Harbor. He really was Roosevelt's domestic enemy #1 in the immediate wake of Dec 7th. He was one of the first Americans to state publicly that Pearl Harbor had been staged, provoked or at least allowed to happen so as to get the people behind the war effort, whereas many were isolationists on Dec 6th. The implications on the European war are obvious. 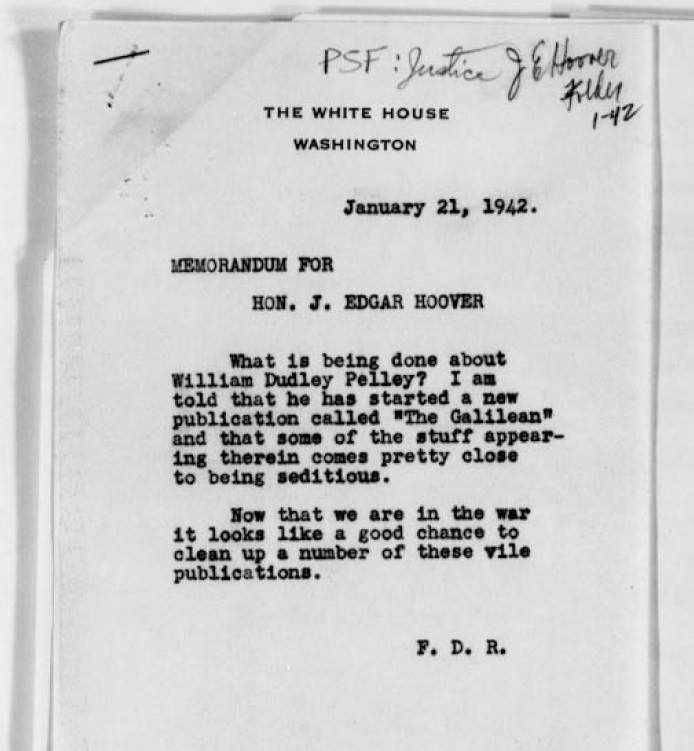 American Archvillain, though the title is intentionally overblown and sensational, intends to be an even-handed, in-depth examination of Pelley's career. Drop by and read a while and feedback here. I keep comments closed on most posts to discourage trolls.
Top
1 post • Page 1 of 1