Discussions on the foreigners (volunteers as well as conscripts) fighting in the German Wehrmacht, those collaborating with the Axis and other period Far Right organizations. Hosted by George Lepre.
7 posts • Page 1 of 1 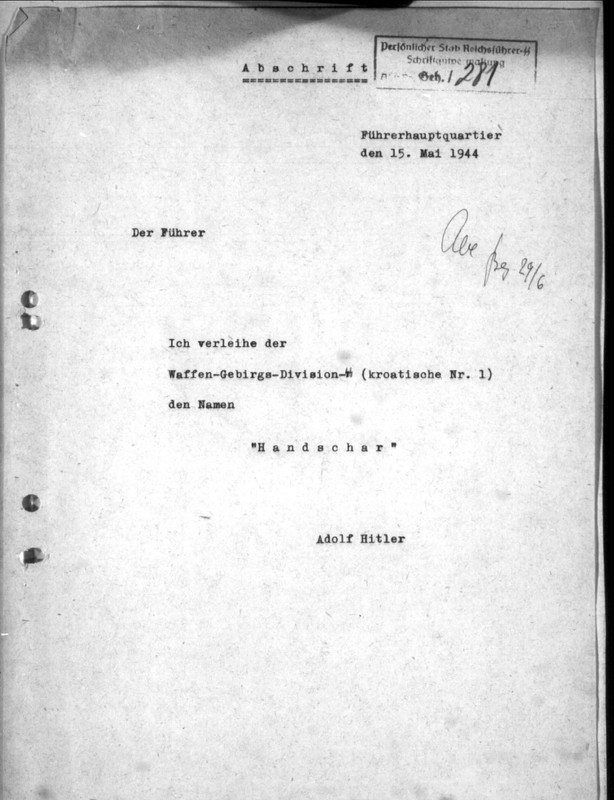 Before it was officially named "Handschar" in mid-May 1944, the unnamed division was given several nicknames by the Partisans and the locals, particularly of the Vojvodina region, where the unit first arrived after the training abroad.

We've already mentioned one, in the section quiz:

Huska wrote: ↑
02 Mar 2019 22:58
I heard somewhere they called Handschar "Blue Division", they had mistaken it with some Croat. divisons.

Ivan Ž. wrote: ↑
03 Mar 2019 12:51
Indeed, they called it "SS plava divizija" (SS Blue Division). This nickname appears in March-August 1944 documents. Apparently, according to the "Zbornici" staff [which compiled the documents], the Partisans didn't mistake it for another division, but they called it "Blue" because of the blue tassels on fezzes. This doesn't make much sense - not only since the tassels were black - even if they were pink, the chances are extremely low that anyone would nickname a unit by such a minor detail on uniform. So the reason for such a nickname remains unknown.

Uroš Šuljmanac of the 1st Vojvodina Brigade also mentions the "Plava divizija" nickname, explaining that it was given because of the blue fezzes (this does make sense, although they weren't actually blue, but field-grey). He added that they also called it "Fesaroška divizija" (Fez-Wearers' Division) and "Mujina divizija" (Mujo's Division; for those who didn't know, in Vojvodina, and other parts of the former Yugoslavia, Mujo is a term popularly used for the Muslims - like Fritz or Hans is for the Germans, elsewhere). See Mladost slobodi darovana (ed. by Nikola Božić), p. 112.

According to the Syrmian War Crimes Commission, the unit was nicknamed "Mujina divizija" by the (Syrmian) populace, and the commission kept referring to it as such in their 1946 elaborate about (i.a.) the unit war crimes. See Političke vlasti u "NDH" (ed. by Drago Njegovan), pp. 189-192.

There was also a longer version of the motto: "Handžaru, udaraj za spas domovine!" (Khanjar, strike to save the homeland!)

An example from an undated document (a draft for a recruiting pamphlet/poster made after the return to Bosnia, March 1944):
0513.jpg
Source for both files: NARA, T175, R70
You do not have the required permissions to view the files attached to this post.
Top

Ivan Ž. wrote: ↑
04 Jan 2018 23:02
A real insignia of the 13th SS Division (as printed on the cover of one of its "Handžar" magazines in late 1943): a hand swinging a khanjar with SS runes in the background. It is still not known how official the design was. Another drawing of the same motif can be found in the NARA files. There are no known (at least to me) examples of any unit's insignia on vehicles. 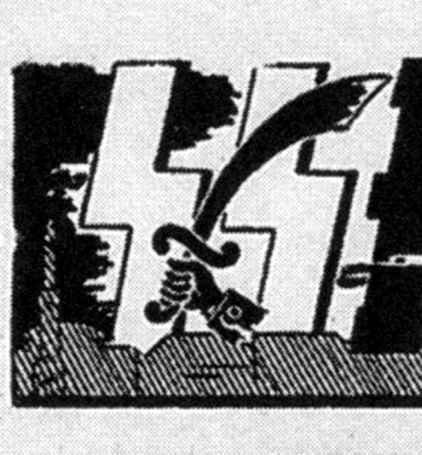 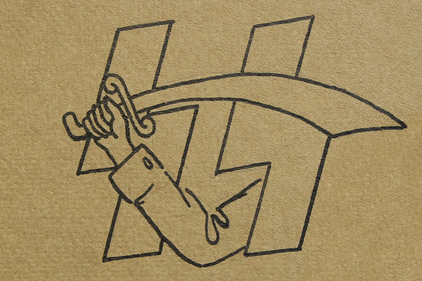 The well-known insignia that can be found in various postwar publications and online (including the unreliable Wikipedia) was designed years after the war by Friedrich Husemann, for SS veterans (see Der Freiwillige from July 1969, pp. 19-20).

So it's not a divisional insignia, but a veteran association insignia. And whenever you see an item with such a motif, especially if someone tries to sell it to you as a genuine WWII item, know that it's a modern fantasy piece.
You do not have the required permissions to view the files attached to this post.
Top

According to the Syrmian War Crimes Commission, the unit was nicknamed "Mujina divizija" by the (Syrmian) populace [...]

As our host George wrote in his Himmler's Bosnian Division book (p. 64), the term Mujo was also used among the Germans:

George Lepre wrote: [The Germans] coined the nickname "Mujo," a common Muslim name, for their men.

Rudolf Pencz wrote in his For the Homeland! book (p. 4) that the German superiors of the second Bosnian Muslim division, "Kama", did the same:

Rudolf Pencz wrote: Known to their superiors as 'Mujos', the Muslims were proficient soldiers and for the most part simple, good-natured men.

The popular term was also used among the troops themselves, as can be also seen in the previously-posted "Mujin čardak" photo:

Mujo wrote: ↑
24 Oct 2015 22:46
An improvised hut with a comical sign that reads: "Mujo's Blockhouse." It is one of the few photographs showing a truly relaxed posture. You can note the mess tins hung on the branches to the left and the absence of cartridge belts or any weapons. There were a few periods of inactivity for the division and this semi-permanent position implies the place was cleared out of any partisan threat. 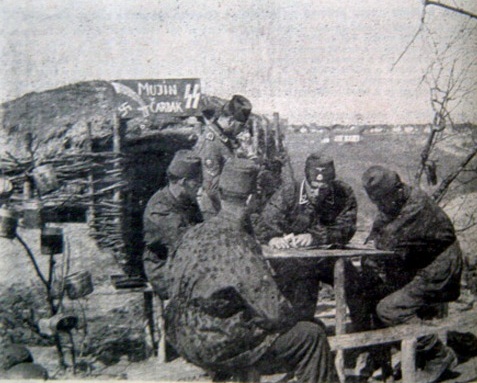 Notice also the unit symbols on the board above the entrance (ref. to my previous insignia-related post): a khanjar and a swastika on one side (like on their collar patch, only without the hand) and SS runes on the other.

By the way, this image from April 1944, which was scanned from a Croatian wartime magazine (precise source still missing), was originally published in Neue Illustrierte Zeitung from 16.05.1944, in a report entitled "Die Männer mit dem Fez" (The men with the fez).
Top

Ivan Ž. wrote: ↑
12 Mar 2022 00:38
And whenever you see an item with such a motif, especially if someone tries to sell it to you as a genuine WWII item, know that it's a modern fantasy piece.

Speaking of fantasy pieces: even though it's quite well known that a cuff title was never authorised for the "Handschar" Division, people keep making them up and trying to sell them. Again, they are all fantasy items.

The "H" was made in Latin and the "andschar" in Gothic script. This speaks enough about the level of education of the people that make fantasy pieces. And what's even funnier is that the fraudsters still don't get it and keep copying it, which is shown by several different copies of this nonsense.

The newer versions of the fantasy cuff title were slightly "better", in the sense that they were at least made in a single script

Note: from time to time, one might come across pictures of "Handschar" men wearing cuff titles - but those were all cuff titles they kept from the units in which they served before the "Handschar" Division. See for example: viewtopic.php?f=50&t=239171&p=2176714#p2176714
You do not have the required permissions to view the files attached to this post.
Top

Ivan Ž. wrote: ↑
12 Mar 2022 00:38
The well-known insignia that can be found in various postwar publications and online (including the unreliable Wikipedia) was designed years after the war by Friedrich Husemann, for SS veterans (see Der Freiwillige from July 1969, pp. 19-20). 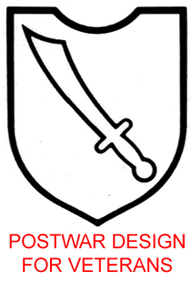 So it's not a divisional insignia, but a veteran association insignia.

Even though the 39 postwar-drawn divisional emblems by Husemann (among which was the above-posted "Handschar" emblem) were accepted by the HIAG and frequently used in their (and other) publications, it doesn't mean that all of the individual (divisional) veteran associations (those that existed, that is) necessarily used them as well.

Now, I haven't had an opportunity to read possible publications by the "Handschar" veteran association (Truppenkameradschaft) and thus can't know if they actually used the above emblem, but I did come across a letter by Hartmut Schmid (of the "Handschar" association, among the Vopersal files at the BArch), showing a similar yet different image in the letterhead, based on the symbol from the "Handschar" collar patch.

Notice that both postwar emblems were "denazified" due to the postwar politics, leaving out the swastika and SS runes, which accompanied the khanjar in the divisional emblems during the war. And this ruined the original divisional symbolism - that the Bosnian Muslim struggle (symbolised by a hand swinging a khanjar) was sponsored by Germany, i.e. the SS (symbolised by a swastika or SS runes in the background).
You do not have the required permissions to view the files attached to this post.
Top

Thanks for all the info and all the myth-busting, Ivan.