That buckle doesn't mean nothing.
Polish soldiers on all fronts (and especially those of the underground army) used a lot of German equipment:

I am fully aware of that, but that is how I found the photo libeled and reposted it. Just to add, in your case, the photo of AK fighters - they are clearly wearing Polish emblems, so that they don't get confused with the Germans. In the photo posted - the man is still wearing his polish army uniform. The other photos of Polish hiwis all have that look to them. Polish uniforms with some german items in them.
Top

Hi,
The men in the previous photos and others I remember to have seen, the Polish AK fighters have a "combat" look, meanwhile the man under discussion have very peaceful attitude, like that the combat is far away, neither he looks like POW. So I pet for hiwi.
Arto
Top

Why do you think that this soldier is in German service?

As I wrote earlier - Polish units fighting on Eastern Front captured German stocks of uniform and equipment. IIRC it was in early 1945 (February?) near Bydgoszcz. Since then you may find some photos of Polish soldiers equipped with various parts of standard German equipment, belts with "Gott mit uns" buckles included.

After 1945 Poland was destroyed and poor country and several Polish soldiers and militia members used virtually any equipment, vehicles and weapons - Soviet, British, American, German. It was clearly visible among militia members who had no official uniforms and mixed all types of military and civilian clothes together with weapons and equipment. Pleas look at this movie on YouTube: http://www.youtube.com/watch?v=Wp7xbAfsPxM - on 0m57s militia members are leaving building. It's just several seconds but you may see some German equipment. Another scene begins at 02m10s and ends on 02ms, at 02m27s militia member has German motorcycle coat. I can't find another movie where militia members are armed with MP-40s and wear German coats.
Best regards,
Piotr Mikołajski
Top

His uniform and the whole look definitely looks early war to me, but who knows its hard to judge without any Germans standing around

Pretty sure it's a photo of a UPA "soldier."

Give us a link where you got it from though. Thanks.
Top

Thank you very much for your views Domen, I find them very interesting.

I have been unable to find the size of the pre-war Polish Party.
Do you have any idea of its size please?

To offer you another take on nazi recruitment techniques.

One of my friends joined the Wehrmacht shortly after the Nazis invaded.
He told me that he joined to save his parents’ lives not his own.
From his account, the nazis put him, and a large number of other ethnic Poles in a cellar, which they then flooded.
By the time they were very close to drowning, and nobody had “volunteered”, the nazis told them that they would also drown their parents if they did not volunteer.
All then volunteered.

After we sank his sub, the French underground transported him across Europe to train the Free Poles in Persia.

Another friend, told me nazi recruiters in and around chatted Polish men and boys along the lines, you look Polish how about joining us, good food, good beer, good pay, women, etc.

From Wikipedia, I learnt that nazis set up huge screens showing films of the good life nazis lead on the food, drink, and luxury goods plundered from Occupied Europe to help recruitment through towns and cities in Polish Poland.
I do not know how successful they were.

Wikipedia also told me that the Polish Government offered Polish units to fight alongside the nazis on the Eastern Front.
Apparently, Evil Adolph turned it down.

Incidentally, you did not mention Katyn.
How do you feel Katyn would have effected recruitment of ethnic Poles by the nazis Doman?

Askold wrote:[Split from "Polish Volunteers In The Wehrmacht"] 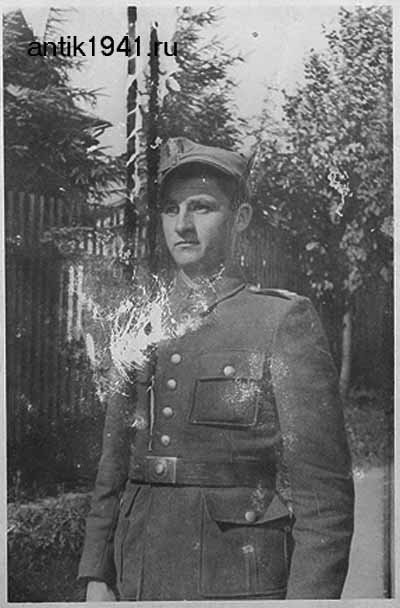 If he was a Hiwi, I believe he would've had the armband.
Top Askold I guess the label " unsere 2 polnische Hiwis " on drawing #1 is on the backside because the front reads "Noch ist Polen nicht verloren!" = "Poland Is Not Yet Lost" or in polish "Jeszcze Polska nie zginęła". The first sentence of Poland´s national anthem.


= Image #2: Our cook, also a polish Hiwi, is yelling after our patron. upper left = our patron, below right our polish cook.
The cook is shouting: "Pirunja.. boss just on cigarette stub." The chicken´s first word "Again".

Looks curios that the boss is running away, no idea what "Pirunja" should be. Doesn´t seem polish to me.
Top

Thank you for clarifying. Perhaps the writing is at the back, I came across the drawings while doing my research and thought to share them. The subject of Polish volunteers in WH is still a very unstudied topic.
Top

history1 wrote:Looks curios that the boss is running away, no idea what "Pirunja" should be. Doesn´t seem polish to me.

"Pirunja" seems to be slightly distorted vocative case of pierun - "(Ty) pierunie!". And pierun or pieron is a regional word used to address persons one is angry with.

I have no interest in whys and wherefores of Volunteering for German service in Poland - it must have been a horrifying experience for all concerned to be in one of the countries invaded in the East - thank fully they didn't get across the channel to inflict themselves on us first hand . So ia have a load of sympathy for all of those put in to difficult places by occupation , subjugation and annihilation eventually by this nasty regime ( Russians just as bad ? )

What I would like to know is just how many Poles did volunteer and how they were organised - not just 'Volksdeutsch but also ex members of the Polish Army - who no doubt will have had a deal put to them ... like Fight for us or Starve etc etc .
I know Adolf was particularly keen on Alpine and Mountain units - did the Karpaty Army just dissolve - did the Podhalians get out or where they rounded up incarcerated and 'conscripted ?'

All info on this understandably sensitive issue would be gratefully received .

I have a number of Polish frineds descended from the lucky ones who escaped and got to the UK - what befell those who were captured ?
Top

Njorl wrote:[...] "Pirunja" seems to be slightly distorted vocative case of pierun - "(Ty) pierunie!". And pierun or pieron is a regional word used to address persons one is angry with.

JohnWithill wrote:What I would like to know is just how many Poles did volunteer

I'm afraid there are no such numbers known. About 400 thousand of Poles were conscripted into the Wehrmacht, Luftwaffe, Kriegsmarine and even SS but all of them were considered German citizens.

They wasn't organised in "national" units, they were sent to different German units.

There was an attempt to form "Polnische Wehrmacht" in Radom in late 1944 but only few hundreds of volunteers joined that "unit". They had to fight against Soviet units and some of them were trained as saboteurs and agents. In early 1945 (March?) they were dropped in areas liberated by the Red Army but very little info is available. Basically almost all we know are information from one of members of this unit.

Quite interesting and complete article (in Polish - you have to use Google Translate, I'm afraid) by Jarosław Gdański (expert in field of foreign formations in German service) was published in one of Polish magazines, "Inne Oblicza Historii" ("Different Faces of History") and is still available online in Web Archive: http://web.archive.org/web/200709272245 ... 2&Strona=1


JohnWithill wrote:I know Adolf was particularly keen on Alpine and Mountain units - did the Karpaty Army just dissolve - did the Podhalians get out or where they rounded up incarcerated and 'conscripted ?'

Try to find information about "Goralenvolk".


JohnWithill wrote:I have a number of Polish frineds descended from the lucky ones who escaped and got to the UK - what befell those who were captured?

You mean those who were conscripted by Germans, tried to escape to Allied units and were captured by German units? Such people were considered traitors and were sentenced to death.
Best regards,
Piotr Mikołajski
Top
419 posts