history1 wrote: I assume he didn´t hesitate to undersign the Volksliste? Or did he wait until they shot any family member?

Both the events that I described are from two families' verbal history. To my knowledge, there is no "official" documentation to support either one. However, the family service component has been confirmed.

Several threads dealing with Poles serving with the Wehrmacht/Waffen-SS have been merged into this one for easier reference.

For the many Poles who were conscripted as Germans we have the thread at http://forum.axishistory.com/viewtopic. ... 1&t=186111

Came across this photo in the internet - polish uniforms, marching with armbands and the nazi flag. A unit of Polish volunteers?
You do not have the required permissions to view the files attached to this post.
Top

From Schlesische Zeitung, September 1939:
volksdeutsche.jpg
You do not have the required permissions to view the files attached to this post.
Top

A perfect, factual and sourced reply.

It is also a very good illustration of the misconceptions that may arise when material gets divorced from its source.

A have found fake shield of "Polish volunteers" which has been posted on one Polish website. 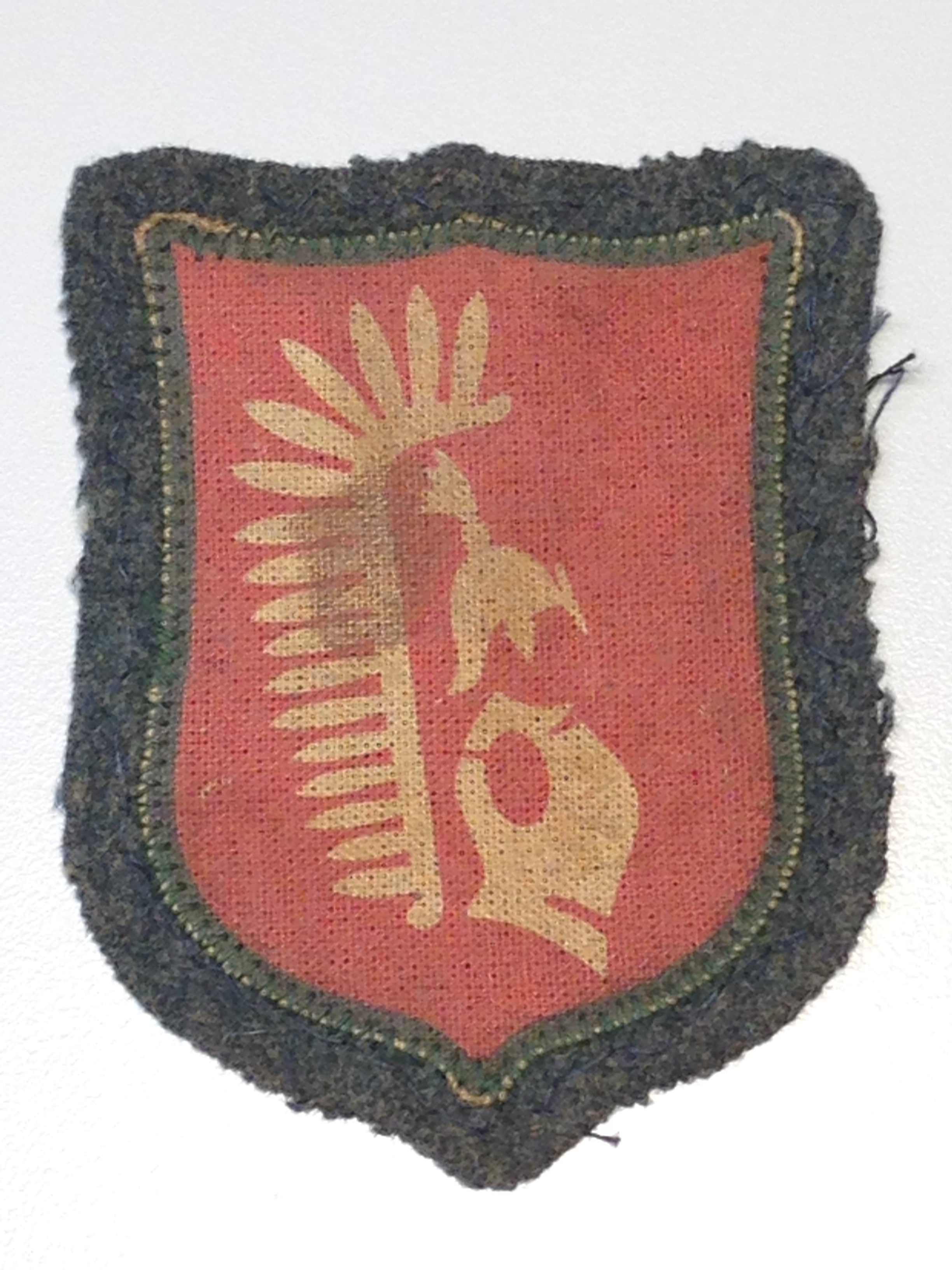 The owner of this "website" claims that this is a "proof" that such Polish unit had existed.
Could you identify this shield?
Top

It is a common device by Polish commentators to claim that any Polish citizen who actively collaborated with the German occupiers was an "ethnic German". For example, it is claimed that the mayor of Jedwabne, who led the pogrom against the Jewish residents of that town in 1941, was actually an 'ethnic German".

The reason for such claims is quite clear; it is to present the idea that no true Pole, a person of solely Polish descent who identified fully with the Polish people and its State, could possibly have stooped so low as to collaborate with either the German or Soviet occupiers, unless he were a member of a criminal underclass. In that view, only members of the ethnic minorities, Germans, Ukrainians, Jews (in the Soviet-occupied zone), non-Polish people considered even before the war as hostile and disloyal to the Polish State, could collaborate in such a way, the corollary being that collaboration was in itself an indication of being a member of one of the non-Polish minorities, either openly or secretly.

The problem with that interpretation is that the whole concept of "ethnic German" was a very hazy one, given the centuries of ethnic mixing in the German-Polish borderlands. In the German-occupied part of Poland it was the German authorities who determined which parts of the population under their control would receive the official designation of "ethnic German" and the privileges and duties that went with it, and willingness to collaborate was a major criterion in making that determination.

Thus, the Reichsstatthalter of Reichsgau Danzig-Westpreussen, Albert Forster, arbitrarily declared as "ethnic German" all the native inhabitants of that Gau, ie excluding Poles who had settled there after 1920, when that former German territory had come under Polish sovereignty.

An example of the fluidity of the concept of "ethnic German" is the experience of certain Polish citizens who were granted the status of "ethnic German" and subsequently conscripted into the Wehrmacht. A number of such men went into Allied captivity at the surrender of the Axis forces in Tunisia, and subsequently declared themselves to be really Poles, as a result of which they were allowed to join the Polish units that were part of the British Army. Thu8s, those men were "ethnic Germans" while serving in the Wehrmacht, but "Poles" while serving in the Polish units.

As far the photograph at issue is concerned, it may be that all the men in Polish uniform shown in it were genuine ethnic German citizens of Poland, but it is equally possible that some of them had not previously identified themselves as such, but had received the status of "ethnic German" as a result of their willingness to collaborate. The fact that the men were designated in the caption of the photo as "Volksdeutsche" is not itself conclusive; there would have been a clear incentive for Polish POWs to claim "ethnic German" status in order to be released from captivity.

What is historically true is that the German occupiers did not create any military units that were officially designated as Polish, in the same way as there were units designated as Ukrainian, or Latvian, or Estonian, or French. But the Ukrainian SS-Division "Halychyna" consisted of men who until 1939 had been Polish citizens, and given the rather hazy distinction between ethnic Poles and ethnic Ukrainians in the Galician region it is entirely possible that some of the men who were recruited into the "Halychyna" Division had previously had a Polish ethnic identity.

The bottom line is that must have been a reasonably large number of persons serving in various German military units who were ethnically Polish, although they served under different ethnic designations, eg ethnic German, ethnic Ukrainian, ethnic Russian, ethnic Latvian, etc.
Top

In my own family, my mother had a polish sounding surname, lived in a german village 80km from Warsaw on the Vistula river, her father was born in 1900, served his conscription in the polish army, was conscripted into the german army in 1943 and immediatly promoted to sergeant due to his previous military (polish) service. The family considered themselves as german. My fathers family has a german sounding surname, his family lived in a german village in the USSR and was part of the population swap in 1940 ending up in my mothers village, he never served in the military but was an ardent national socialist. My father served in the german air force as a HJ flak gunner. The family had also always considered themselves german. So even if you were born in Poland or Russia, you can consider youself German, which was their first language, but were bilingual polish or russian. I consider myself as Australian with a german background.
Top

You post, "The bottom line is that must have been a reasonably large number of persons serving in various German military units who were ethnically Polish, although they served under different ethnic designations, e.g. ethnic German, ethnic Ukrainian, ethnic Russian, ethnic Latvian, etc."

What order of magnitude is "a reasonably large number"?

Your previous paragraphs to the final one contain the qualifiers "may" and "entirely possible", but your conclusion firms this up to "must".

I know this is a nebulous subject area, but I think your post has this internal inconsistency.

The mayor of Jedwabne was actually a German citizen, he arrived there during occupation if I'm not mistaken.

In the occupied territories to become a German (category I or category II Volksdeutsche) you had to be a German first i.e. you had to have a German ancestor(s). There was no way around it.
So really they were more or less Germans.

In some annexed areas Forster's "Germans" were allowed, usually they knew the German language, understood German culture and were considered to be of value to Germany (category III or category IV Volksdeutsche).
But still they were considered imperfect Germans with few rights in comparison with the "true" Germans.
They were usually forced into this and actually Polish authorities had no problem with it. They even encouraged such behaviour in order to protect those people from persecution.

Does anyone know something about the shield I have already posted above?
Top

They say it was worn by the formed at the end of 1944 so called called Legion Orła Białego - Legion Of White Eagle. I think I saw an Underground report saying those people was mostly displaced from the destroyed Warsaw lumpenproletariat.
Eventually they ended up as Hivis.
Here at the end of the page are listed the only sources available.
This man seems to be the expert on this subject.
Top

In the occupied territories to become a German (category I or category II Volksdeutsche) you had to be a German first i.e. you had to have a German ancestor(s). There was no way around it

For a Polish citizen to be admitted to the two higher categories of "ethnic German", it was not enough to have known German ancestors; one also had to have a record of identification with Germany, and of having been active in the preservation of a German ethnic identity in Poland.

It is quite likely that only a portion of all Poles with some German ancestry ever received the status of "ethnic German". But the issue here is the idea propagated in Polish patriotic historiography that any Polish citizen who collaborated with the German occupiers cannot have been of "pure" Polish ethnicity, that that person must really have been a member of one of the ethnic minorities, German or Ukrainian or Lithuanian.

As for the mayor of Jedwabne at the time of the massacre of most of the town's Jewish inhabitants, his name was Marian Karolak, which hardly suggests a person of German ethnicity.
Top

They say it was worn by the formed at the end of 1944 so called called Legion Orła Białego - Legion Of White Eagle. I think I saw an Underground report saying those people was mostly displaced from the destroyed Warsaw lumpenproletariat.
Eventually they ended up as Hivis.
Here at the end of the page are listed the only sources available.
This man seems to be the expert on this subject.

The problem is that this website is nothing more than compilation of various materials which you can easily find online.
Myths are mixed together with historical facts and some pics are wrongly titled.
For example this photograph shows "Forstchutz", not "Polish volunteers": 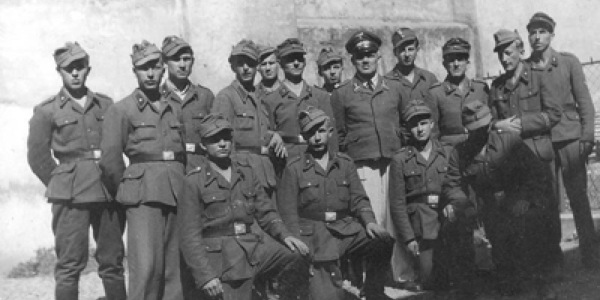 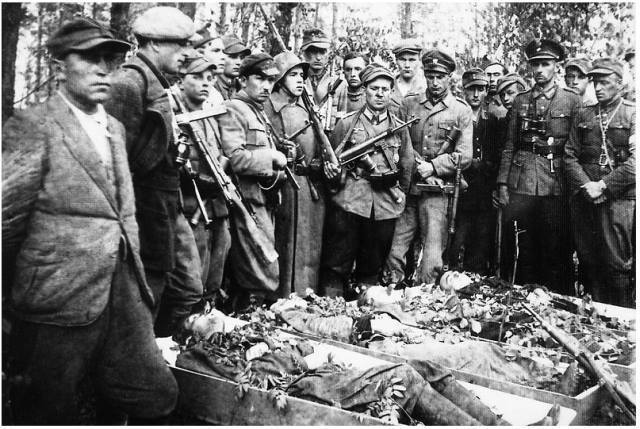 shows Armia Krajowa partisans from Lublin area in 1944 r. Why they appear on this website remains a mystery:)
Top
419 posts