Discussions on the foreigners (volunteers as well as conscripts) fighting in the German Wehrmacht, those collaborating with the Axis and other period Far Right organizations. Hosted by George Lepre.
78 posts

Hi
During the 90's this officer was often indentified as BISCEVIĆ but now as Hstuf ÐOZO (and I trust them). But is someone have a picture of BISCEVIĆ and what was his latest rank in SS-Stubaf. or -Ostubaf.?

Ph D
You do not have the required permissions to view the files attached to this post.
Top

Biščević was an Ostubaf., but I don't have any confirmed photos of him yet.

balkanguy44 wrote: ↑
11 Nov 2018 08:59
It's not a Bosnian but an officer in the Handschar. I'm speaking about Karl Josef Fischer - he was a doctor in Auschwitz and was transferred to Handschar on 1 January 1944. Does anybody have more information about his service in the Handschar? 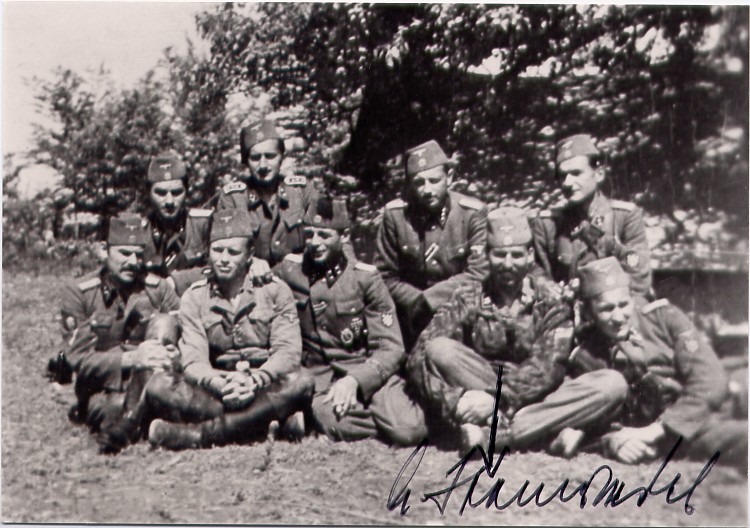 Hi Ivan
Thanks for your answer on the last rank of Biščević. He was one of the high rank bosnian officer (maybe the high rank) and no pic of him nowhere, in books or on the net.
Ph D
Top

Here is an alleged photo (poor quality) of Oberstumbannführer Biščević, haven't heard anyone denying or accepting the photo, maybe someone here knows!

Cheers, Filip
You do not have the required permissions to view the files attached to this post.
Top

As you can clearly see by his collar patch in this good quality copy of the photo (from BPK), it's not Biščević, nor an Oberstumbannführer, but a common soldier. I wonder what kind of mind spreads all that recent misinformation...

I strongly advise against using such sources on the forum board, and in general. People write whatever nonsense that comes to their mind and then we spend our valuable time here correcting it. It's better to simply ignore such websites.

50140062b.jpg
Cheers,
Ivan
You do not have the required permissions to view the files attached to this post.
Top

How it comes that there is no confirmed photo of Biščević? He was the highest ranked Bosnian Muslim.
Cheers,
BG44
Top

Biography of Kasim Mašić:
Imam and Ustuf Kasim Mašić was in the anti tank department 13, born on 9.11.1919 in the village Luka near Ilijaš, Sarajevo, died in Travnik on 3.2.2001.
He finished Gazi Husrev bey Medresa and High Šerijat - theological school. After education the leadership of Islamic Community (Ulema Medžlis) submitted six graduates of this high school to be Imams in the newly formed Bosniak SS-Division "Handschar". Kasim's friend Alija Izetbegović (member of Young Muslims and Future president of Bosnia) told him to not go to SS-Division "Handschar" but he had to go because many Bosniaks were in the 13 SS Formation which motivated him and the other Imams.
He was captured by Communists in Zagreb in the spring of 1945. He even met Halim Malkoč in the Zenica prison.
He would spend rest of his life as an Imam in Šarena Džamija in Travnik.

Image source:Facebook
You do not have the required permissions to view the files attached to this post.
Best Regards

Thanks for the info.

Torlić was Imam and SS-Ostuf. in the SS-Artillerie-Regiment 13.Came to Bosnia from France in 1943 ,firstly imam in the croatian army Domobrans. Killed by partisans when they entered Travnik.
Best Regards

HI COMMUNITY! I have found some great information on HUSEIN BEG BIŠĆEVIĆ highest ranking muslim in SS Handžar.
Special thanks toBišćevići family on Facebook for info. Husein was a member of BH REGIMENT in K.u.K army in the WW1.
In WW2 he jonied the Croatian army(Ustashas) in 30.8 1941.and served there as an Captain and later as Major.
He was granted to "Kordunski sdrug" and got a silver medal for being brave and worked hard in the battles around Vojnići and Sići place. He got to the position of deputy commander on 15.7.1942 in the Third Sdrug and Headquarters commanded by Josip Metzger.
He got another medal for his battle actions on Kordun.He got the famous Silver Croat Trolist( fourth stage)
He would spend his military career in Zagreb in 5.1.1943. Eventually he jonied SS Handžar(In august '43).
He had the highest rank in the division,Obersturmbannführer.
He was replaced in the Flak Abteilung on the First of march 1944 when he was 60 years old.He was replaced by Captain Max Daumer.
He dissapeared in Tito's columns of death.
Best Regards