Discussions on the Winter War and Continuation War, the wars between Finland and the USSR.
Hosted by Juha Tompuri
116 posts

That pretty much covers BIGpanzer's question. The easy answer to most common medium machineguns in Finnish use at 1920's and 1930's would be Maxim M/09-09 and M/09-21. Model 09-21 was still most common when Winter War begun. So, basically M/09-09 was the most common early on until number of M/09-21 passed it (unfortunately I am not sure about the year it happened).
Top

Valtion Tykkitehdas (State Artillery Factory) was often called with its abbreviation - VTT. It seems the factory didn't get anything manufactured ready in 1938. This is rather usual to new ordnance factories - starting production takes time. Only thing it succeeded starting to manufacture before Winter War were small number of 37 PstK/36 antitank-guns, first of which were finished at summer of 1939. Other main product of this factory was 40 ItK/38B Bofors anti-aircraft gun, but their production didn't start until 1941. Notice: Both of these guns were Bofors designs manufactured under license, the license had been acquired before World War 2.

Before WW2 Tampella sold Finnish military only 81-mm mortars and small number of 47-mm mortars (experimental status). It manufactured its own 120-mm mortar protype in mid-1930's (1935?), but didn't start manufacturing it (or to be exact its improved version) until 1940. Brandt had 120-mm mortar model, but it seems that Tampella didn't manufacture any. The pre-WW2 exported mortars were 60-mm and 81-mm Brandt models.
Top


Flying units of the White Forces


German troops had a Flieger-Abteilung 16 led by Hauptmann Georg Liebermann von Sonnenberg at Tallinn, Estonia since 25.2.1918. Detachment had for example D.F.W. C.V and Friedrichshafen FF 49C reconnaissance planes which during the winter and spring flew a total of 70 recon missions to Finland taking 332 aerial photographs.


Flying Detachments of the Reds

Attached to Aviation Battalion (Ilmailupataljoona) on 20.3.1919.

Attached to Flying Battalion (Ilmailupataljoona) on 28.9.1918.

Divided into Aviation Dock (Ilmailutelakka) and Aviation School (Ilmailukoulu) on 1.3.1924.

BIGpanzer wrote: The most interesting thing I found was the large old Finnish bunker (made from stone blocks and cement, 2 floors inside and open platform for the medium calibre gun on the top). That bunker located on uninhabited small island on Ladoga Lake (we made a small trip there on motor boat), and even beds, wash basins and armored doors were still in quite good condition, but already all things became rusty, some were broken. I suppose that was Ristisaari or very closely islands according to Juha`s map. Unfortunately, I forgot to take my camera that time to make photos

Is this of any help ?
http://www.tourism.ru/phtml/users/get_desc.php?39

Thanks a lot, interesting link [need some time to read and analyze it]. My friends made several photos of that bunker but they are far away from me, I will try to get those photos later if possible.
Looked like this one but "my" bunker/observation post seems to be larger - http://www.tourism.ru/docs/desc/9/14/39/111112.jpg

I will return back to this my old thread as it is very far from completelly finished, but later also.
I also found a lot of materials about Finnish Army and Navy of 1920s during the last year. Probably, Finns know this info [and can correct/add some info to mine], but it will be very interesting for another [non-Finnish] members. I will try to return back here in the beginning of June according to my general AHF plan

Ah, just a by-product at my search for the Finnish and Soviet gunboats at Lake Ladoga.

I. To stay in topic I can mention Soviet gunboat "Sheksna" of Ladoga military flotilla, which was ex-Finnish armored icebreaker "Aallokas" [370 tons; 34.15x7.5x3.35 m; 520 hp steam engine; 11 knots; 1000 miles at 8 knots; 56 men crew]. It was built in 1936 in Sortavala [Sortavalan Telakka ja Konepaja Oy shipyard] and the ship was taken in spring 1940 by Red Army units and Soviet warships of Ladoga [after sign Moscow Peace Treaty, which finished the Winter war].
As I want to discuss only Finnish army as much as possible here, please, provide me with the info about service of "Aallokas" in Finland [before the Winter war].

I know that when the Winter war began the icebreaker was armed with two 75mm guns and two 40mm anti-aircraft guns. It was the largest vessel of the Finnish Ladoga Flotilla and the flagship of the gunboats flotilla of lieutenant-commander Asikainen [4 gunboats: "Aallokas", "Aunus", "Tarmo" and "Vulcan"]. From 14.12.1939 till 12.01.1940 "Aallokas", "Tarmo" and "Vulcan" performed 11 raids to the areas near Pitkäranta, Mursula and Koirinoja. It total during this raids the gunboats fired at the enemy ~150 75mm shells.

The photo of icebreaker "Aallokas" at Sortavala harbour, winter 1936 is from
http://heninen.net/laatokka-war/aallokas/aallokas1_.jpg

In 1919 the tug was reequipped into gunboat and became a part of Finnish Ladoga flotilla. According to the 1920 Tartu Peace Treaty between Soviet Russia and Finland "Aunus" should have armament of 2x47mm guns + 1 MGs + 30 mines.
http://heninen.net/aunus/a0_.jpg [August 1934]
"Aunus" [commander - lieutenant T. Helikari] participated in artillery attacks and setting minebanks during the Winter war, for example 07.12.1939 "Aunus" set 16 mines near Vuaratsu Island.
Since 1982 TShch-100 [ex-"Aunus"] is at eternal stay in Novaya Ladoga in Russia -
http://heninen.net/aunus/tsch-100-2.jpg

The photo of icebreaking tug (gunboat) "Aunus" in 1928 is from
http://heninen.net/aunus/aunus2_.jpg 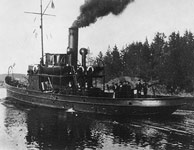 I have information that latvian VEF delivere finnish army some secret equipment, and I whant to know what VEF delivered Finnish army.
Top

Sorry to necro this, but this is both an interesting thread and I have a question regarding the strength of the FDF in 1936, specifically the active strength.

Someone on another forum used a few of the posts here on the first page to give a figure of 100k active + 340k in reserve, but 100k seems way too high for active service in 1936. For comparison, today's active service is 30,5k with conscripts included. Without conscripts it's 12k, out of which a third are civilians or people with only civilian training. So there's really only about 8k professional soldiers today, that is unless this figure also includes reservists in Local Defence Companies.

So my question to you guys is, what was the active strength of the FDF in 1936? How many were professional soldiers, conscripts or even civilians? I'm not sure if the Civil Guards can be factored into this figure, as they were still reservists (except for the younger participants who had not even been conscripted yet), but it seems they were integrated closer to the FDF OOB after the failed Mäntsälä Rebellion of 1932, more info here: https://fi.wikipedia.org/wiki/Suojelusk ... 30-luvulla (Finnish).
Top
116 posts