So, I'm continuing work on my forthcoming book on the year 1942, and am wanting to do a map on the earlier actions on Kerch leading up to Manstein's Operation Trappenjagd in May. Specifically, I would like to lay out the battles that led to the curious curve in the line that Manstein would later capitalize on. I've never seen a map of these Feb-Apr battles, so I'm having to use what sources I have to create one from scratch. The result, in some cases, is somewhat conjectural. I am hoping that other members on the Forum might pipe up with other details, sources, or comments. 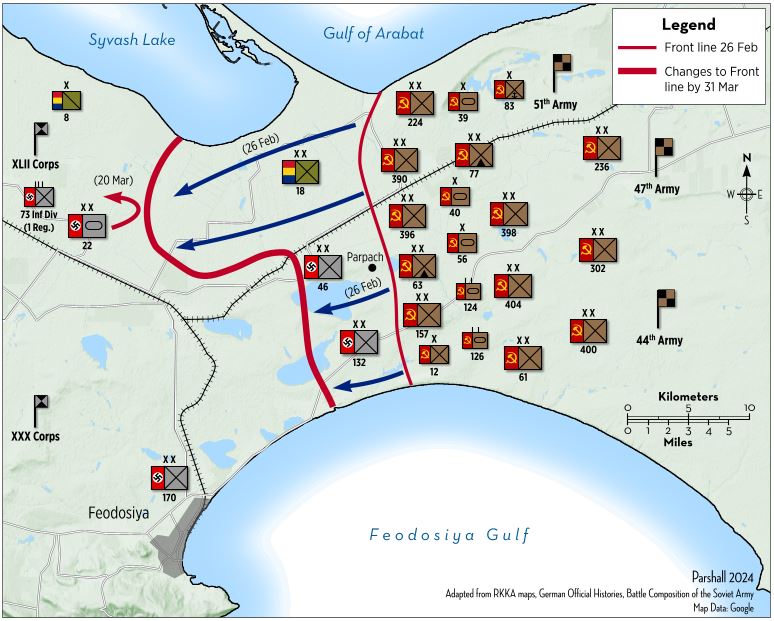 It is based broadly on the LageOst maps for this time period. Below you will see the one from 24 Feb, 1942, i.e. just before the start of Kozlov's initial assault on the 26th. Thus far, LageOst is the only actual map I've found of these actions. The drawback, of course, is that the Germans didn't necessarily know which units were across from them on the lines at any given time. In particular you'll note that this LageOst map does not even suspect the existence of 47th Army.

However, a perusal of the Russian OB for its armies in the Feb-Mar time period is somewhat helpful, in that it lists several of the divisions that the Germans believe are operating in front of them. I am using the "Battle Composition of the Soviet Army" which was a classified document prepared postwar by the Russian MoD, which was later declassified. It's all in Russian, but I have it in PDF form, and use Google Translate to grind my way through it. Anyway, I attach the cover of that source, along with the February and March entries for the Crimean Front's three armies and associated units. 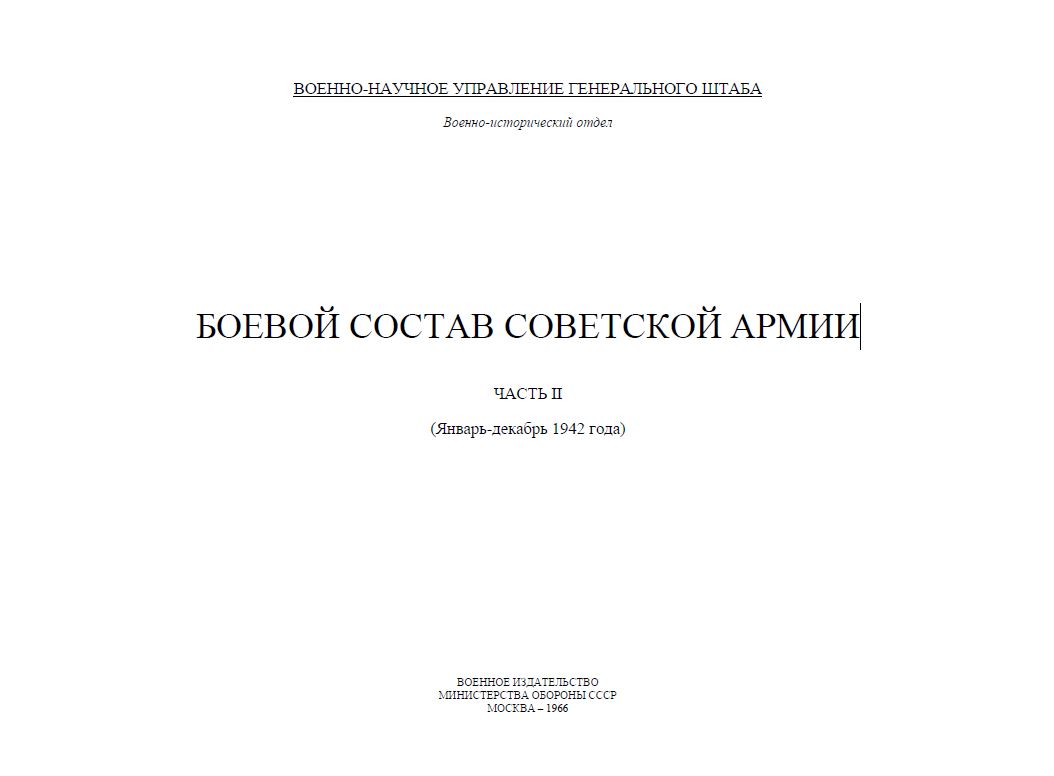 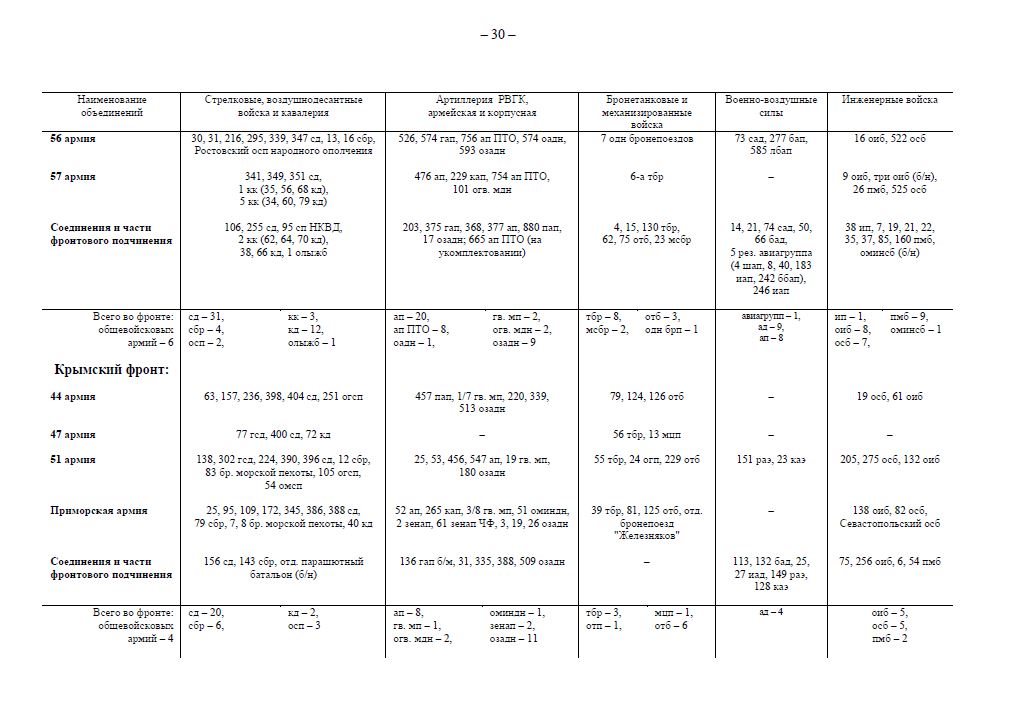 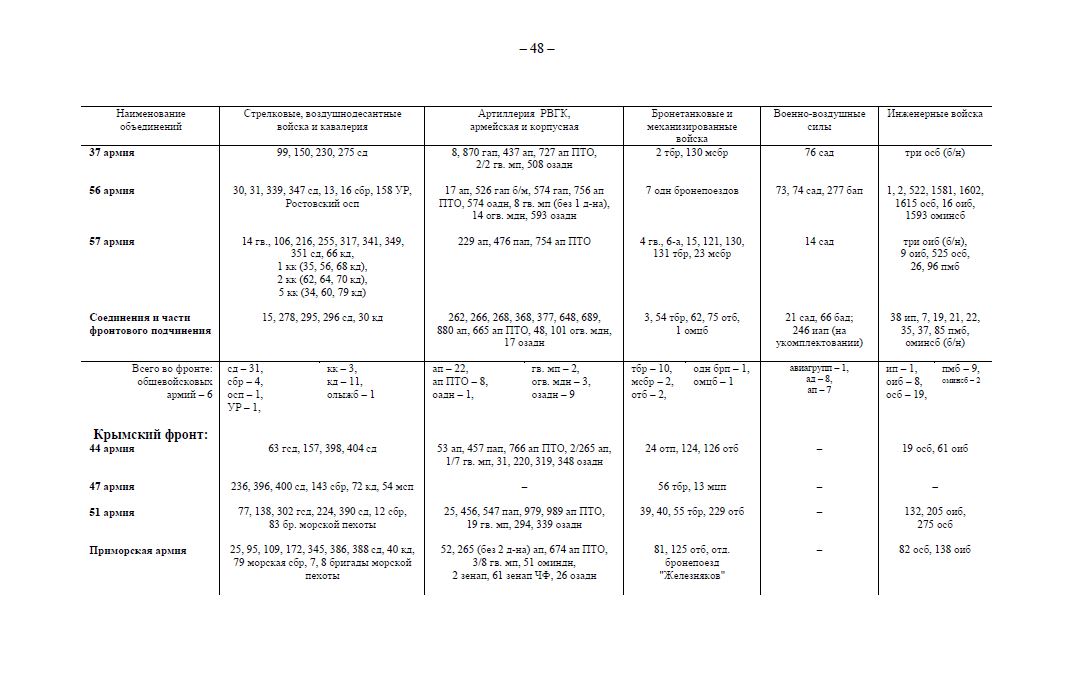 Analysis: If the Germans are correct (i.e. LageOst is correct), and the six units operating in front of them include 224th Rifle in the north, and then so on towards the south, then if one uses the Soviet OB sources, this broadly suggests two things. First, ALL THREE Soviet armies are in action during this time frame, because we find units associated with all three of those armies in their March OB. However, the forward disposition of 51st, and the existence of 47th have apparently not yet been detected by Fremde Heer Ost. Second, broadly speaking, it seems 51st Army was operating in the northern part of the sector, 47th in the center, and 44th in the south. This is somewhat different than the dispositions in May, however, which were 47th, 51st, 44th respectively north to south... and that makes me suspicious that I may be wrong about my March map.

The placement of the Soviet tank brigades on my map is largely conjectural, and based on the fact that they are 1) listed in the March OB as being attached to their respective armies, and 2) some of them at least are mentioned in Robert Forczyk's "Tank Warfare" (pp. 177-178) as part of this attack. But their placement on my map is little more than 'us appropriately-numbered tank brigades for each of the three armies, and plop them down in the second echelon behind the front-line rifle divisions.'

In any case, if anyone has better sources, maps, or other comments, I'm all ears. Thanks in advance.

John impressive map! I heard about your 1942 book on WW2TV. Can't really offer much help. You probably already know that CB is working on an expanded and upgrade version of BCRS Vol 2 which deal with the air ops on the Eastern front during this period. For ship losses on 12oclockhigh.net they are working on a database of ships sunk or damaged by the Luftwaffe. Also in the Soviet Union at war 1917-1945 section I made a post on Soviet ship losses in WW II and got a reply listing them. Will read your book one day after it comes out.
Top

This is great stuff, and I really appreciate it! Thank you, Art.
Top

IMG_0020a.png
IMG_0021a.png
You do not have the required permissions to view the files attached to this post.
Top

IMG_0022a.png
IMG_0024a.png
You do not have the required permissions to view the files attached to this post.
Top