Thanks for the reply, you know much more about the OOB's than I do. I only heard repeatedly about VDV in action in Kherson, allegedly for a long time without relief, and 'paratroopers', the only specific mention of a unit I saw was to the 11th VDV Brigade in Kherson region in early October.


So to sum things up, the majority of Russian marines are fighting in the Ukraine, and maybe less than half of Russian paratroops. These are the real professional-contract line infantry (although there are rumors that 155th NIB has been reinforced with reservists), the rest of Russia's infantry force are proxy or volunteers/reservists.
Top

Building a new Siegfried Line to protect themselves from their own captured tanks?
Well over half of Ukraine's armor in the field is captured Russian equipment. Like handing
your opponent a sword and then whipping out an improvised shield to protect yourself.
F'ing circus.


US military chief urges realism on war
United States
David Charter - Washington
President Biden’s top military officer said that Ukraine is unlikely to win back Crimea on the battlefield as he stuck by his view that winter will be a good time for negotiations with Russia.

While insisting that the US will continue to support Ukraine, Mark Milley, chairman of the joint chiefs of staff, refused to retract his call for talks.

“The probability of kicking the Russians out of all of Ukraine to include what they claim as Crimea is not high,” Milley told a Pentagon briefing. “There may be a political solution where the Russians withdraw,” he added. “You want to negotiate from a position of strength. Russia is on its back.”

Milley, 64, caused consternation in the White House with a speech in New York last week that was interpreted by Kyiv as applying pressure to resume talks. It was heard by Ukrainian leaders as a potential weakening of US resolve to keep supplying weapons, especially with the Republicans set to take control of the House of Representatives where some members want to hit the brakes.

While both sides held talks in the early stage of Russia’s invasion, these collapsed into acrimony. After the success of Ukrainian counteroffensives in Kharkiv and Kherson, President Zelensky has insisted talks are impossible before a complete military withdrawal.

Milley also said: “The president of the United States has been very, very clear to us that it is up to Ukraine to decide how and when or if they negotiate with the Russians and we will continue to support them as long as it takes.”

The general was appointed over the head of the expected candidate by President Trump, in part because Trump reportedly liked the look of the broadshouldered head of the army.

After Trump’s defeat, Milley became an apparent source for several critical books, including one that obtained a resignation letter he had drafted but not sent, accusing Trump of “doing great and irreparable harm” by making a “concerted effort over time to politicise the United States military”.

Milley stood up to accusations from Republican members in Congress that the US Military Academy was teaching officers left-wing critical race theory.

He said: “I’ve read Mao Zedong. I’ve read Karl Marx. I’ve read Lenin. That doesn’t make me a communist. So what is wrong with having some situational understanding about the country for which we are here to defend?”
Top

mezsat2 wrote: ↑
18 Nov 2022 12:34
Well over half of Ukraine's armor in the field is captured Russian equipment. Like handing

According to a dodgy Ukrainian propaganda blog?

I think the Russians are more concerned with the vast numbers of Ukrainian conscripts, I count 37 Ukrainian brigades at the front.
Last edited by Cult Icon on 18 Nov 2022 17:31, edited 2 times in total.
Top

reservists train on an obstacle course:

Russia continues offensive in the Donbass with their usual obsession with Siversk, Bahkmut, Toretsk, Adviika fortified zone with newer attacks in the Z-oblast : 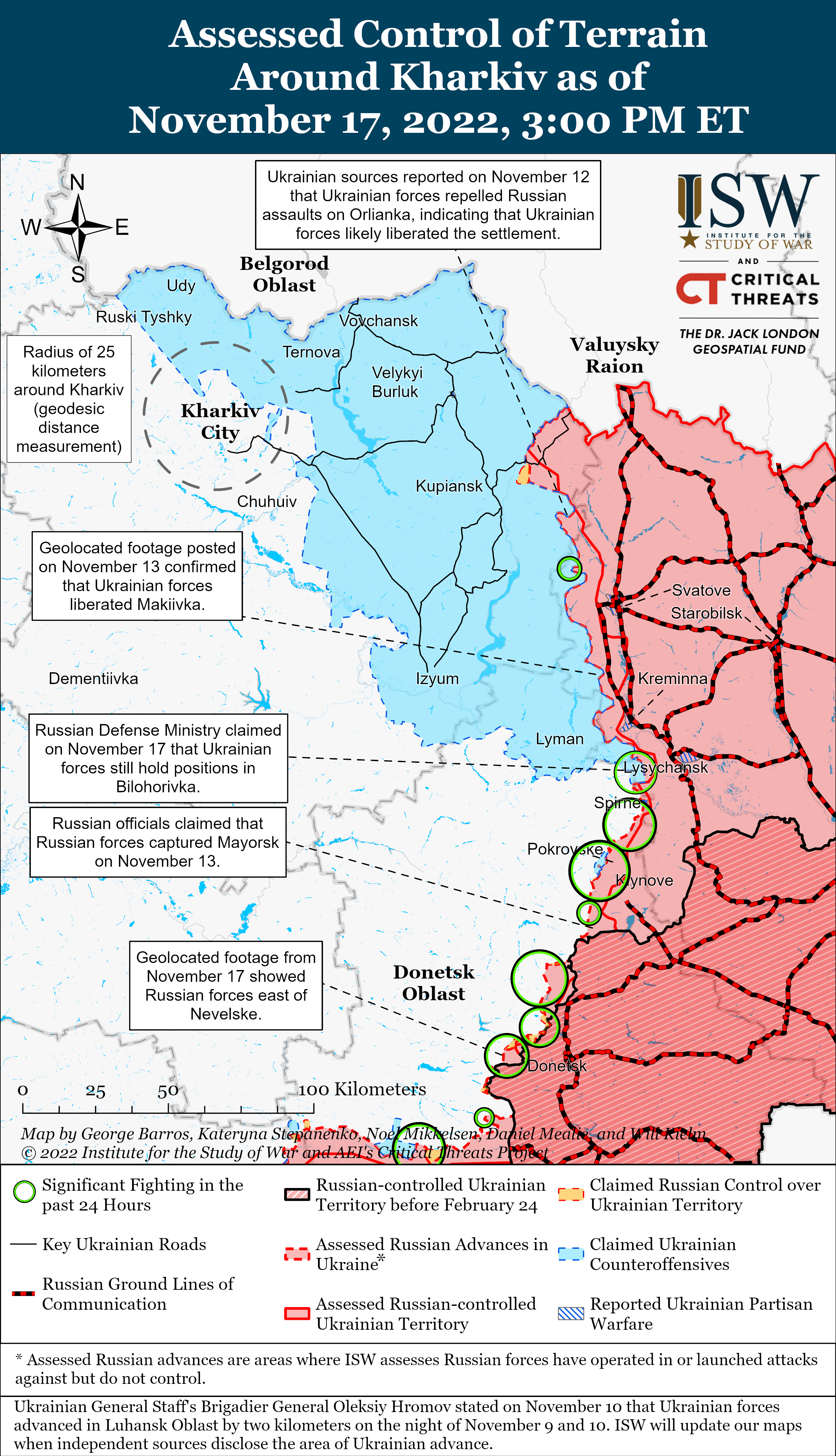 While ignoring the more critical situation north, making little attempt to re-take Lyman and improve the frontline. It is strategically rather strange. They are either comfortable that the Ukrainians will continue to fail to make breakthroughs and/or they are trying to preserve Russian army forces by limiting attacks.

The attacking forces in the DPR/LPR are primarily PMC and separatist formations, while in the Z-Oblast it is the Russian army, primarily marines. In particular the strategic town of Bahkmut is being attacked by Wagner PMC and is their 'prize'.

The only thing that makes the Donbass offensive make sense is that the Russians are trying to fix the mass of Ukraine's army on the Zelensky line and prevent movement towards other fronts. It makes more sense to re-capture Lyman and straighten up the frontline up North first.
Top

In reply to Michael Kenny, I agree. I don't think Ukraine will be able to take back Crimea without reducing the region to rubble...

Unless, of course, the retreating Russians beat them to it with a scorched earth policy akin to Hitler's "Nero decree"

Would they even be welcome back in Crimea after almost 9 years under Russian rule?

Crimea is not Kherson. There will be no scenes of jubilation at being "liberated"

Zelensky will push the envelope too far. He won't be able to help himself. Medvedev has made it clear already that any encroachment on Crimea will be seen by the Kremlin as an assault on Russian sovereign territory and will result in maximum retaliation.

A strong hint that Russia would resort to nuclear weapons if pushed into a corner. By that stage, suffering complete humiliation, they may feel they have nothing to lose...
Top

Crimea is not Kherson. There will be no scenes of jubilation at being "liberated"

Kherson city was made part of Russia during the Referendums. They did not use tactical nukes and did not shoot missiles into Kherson city during the parade.

Also, south of the Dniprio the lines of communication are not so tenuous as in Kherson, with 3 main bridges blown. What the biased media is not saying is that it took half a year of interdiction for Ukraine/western supplies to achieve this result, it is actually not objectively impressive. The expenditure of men and material in this front could have been used more profitably, elsewhere if the Russians were actually not willing to use the bridgehead as a springboard for the march on Odessa. So the quest for Odessa may have been a Russian propaganda trick.

Zelensky's statements are also for propaganda and morale.

I think if the Russians do not shift sufficient forces/combat power to Ukraine for whatever reason (training cycle too slow or something political or military) they will make planned withdrawals and not use tactical nuclear weapons. They have not been using tactical nukes in the DPR which is under attack.
Top 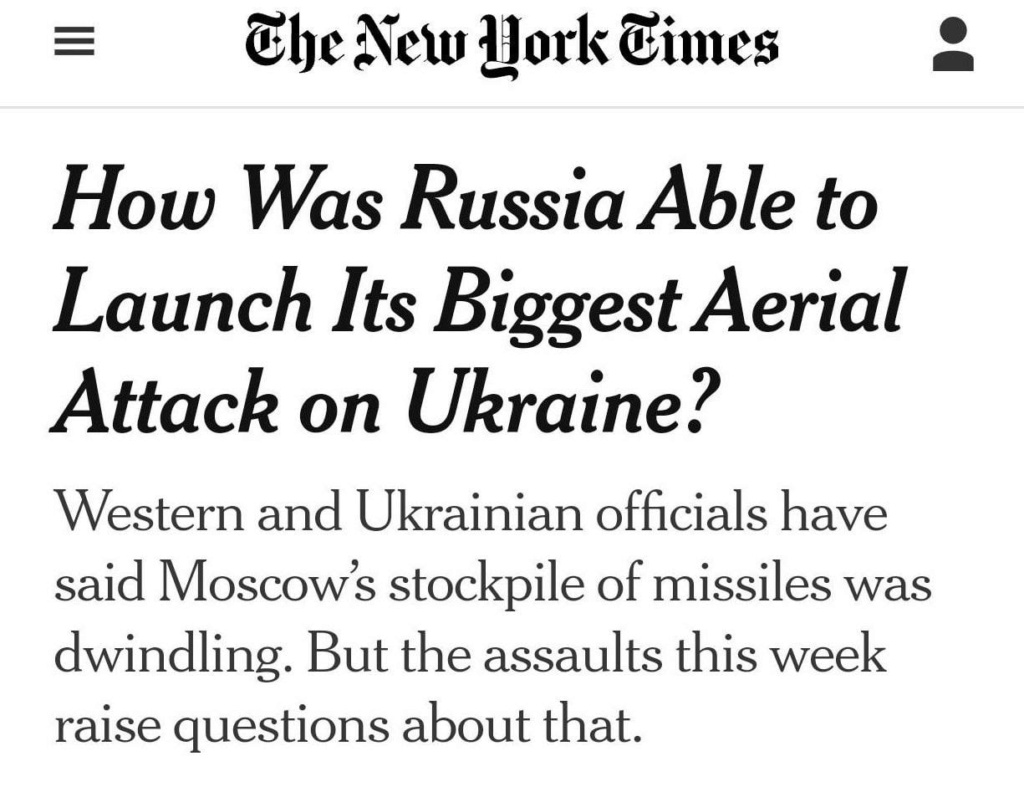 Maybe us in the West will start wondering if the information provided by Ukrainian intelligence is in fact, highly inaccurate?

The usual Orc method of operation: "When in doubt, kill civilians."


Defense Express, citing unnamed sources, said that Russian forces took at least one X-55 from the country's nuclear arsenal, "unscrewed" the nuclear warhead from this missile and replaced it with an empty "block" that was fired over Ukraine.

The outlet notes that the X-55 is a Soviet missile that was originally developed specifically as a carrier of nuclear weapons and that conventional and nuclear warheads differ structurally.

Russia may have done so because its cruise missile inventory is running critically low, according to Defense Express. The Kremlin could also be deliberately attempting to overload Ukraine's air defense systems, the publication said.

Newsweek has been unable to independently verify the claims and has reached out to Russia's defense ministry for comment.

Maybe us in the West will start wondering if the information provided by Ukrainian intelligence is in fact, highly inaccurate?

It's not. The Russians have plenty of missiles...What they don't have are warheads!
Did you see the photo in the article? It's a small apartment fire...Where is the expected devastation of modern Russian weaponry?
Top

"Krasnodar Territory, instructors of the Wagner PMC are training volunteers for militias in the Kursk and Belgorod regions."

Like in the Iraq war, PMCs have been a growth industry. Wagner is not satisfied with its great expansion in this war, they are moving forward and trying to become mainstream. They have become so brazen that they opened a Wagner center in St. Petersburg. Previously I posted the RT Wagner special. The Russian government is even promoting them on TV. In Syria Wagner was much more secretive.
Top

Russian sources believe that the Ukrainians moved 40-25,000 troops to Z-Oblast, for an offensive towards Melitopol.

This was also claimed by the LPR and reported in TASS. This explains the urgency of the attacks of 155th Naval Infantry Brigade, west of the concentration.

Ukrainian sources have gone silent on this.