French Battalion during the Korean war

Discussions on other historical eras.
4 posts • Page 1 of 1

French Battalion during the Korean war

Hundreds of veterans from around the world have attended a commemoration to mark the 50th anniversary of the armistice that ended the Korean war.
I thought it could perhaps be the occasion for me to share a little about the small involvment of French forces during the Korean war. 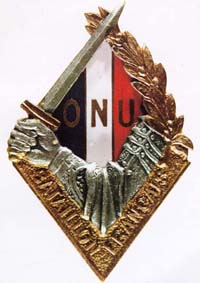 metal insignia of the French Battalion in Korea

On 25 June 1950, 7 North Korean divisions crossed over the 38th parallel, supported by 150 tanks. Less than 60 days later, the invasion force, which met with hardly any resistance, was occupying almost the whole peninsula.

On 22 July, following the British, the Turks and the Australians, France announced that it would join the multinational force, responsible for the implementation of international law and for reestablishing the territorial integrity of South Korea. However, it took the determination of a few French political officials and two General Officers to make this generous move a reality. Indeed, France was hardly back on its feet in the wake of the disastrous Second World War and its army was already engaged in Indochina.

The Chief of Staff of the French Army, General Blanc, who refused to make available active units still anemic and badly equipped, decided to form a battalion of volunteers made up of active and reserve personnel. Lieutenant General Monclar, Inspector of the Foreign Legion, supported the idea and proposed to be the Commander of that unusual unit which readiness time was considerably reduced. The winner at Narvik, wounded 17 times during the two World Wars, General Monclar, accepted to wear again the stripes of a Lieutenant Colonel.

On 25th August 1950, the French government sent a battalion of 3763 volunteers. This French Battalion was attached to the 23rd US IR of the 2nd US ID "Indianhead" (VIIIth US Army). It arrived in Pusan on 29th November and was engaged on 25th December 1950.

Triggering at first skepticism among the Americans, it did not take long for the French volunteers, rather facetious and sometimes undisciplined, to win the esteem of the U.N. forces and especially of General Ridgway, Commander of the 8th Army, by carrying out several successful hits.
From January 7 to 12 January 1951, the French Battalion participated in the Battle of Wonju where, thanks to a decisive bayonet attack, it stopped the Chinese advance. That episode was echoed around the world by American war correspondents reporting from the theater. The French Battalion covered the flank of the division during 5 days of close combats. Then it covered the retreat of the division.

It was followed by the battles of "Twin Tunnels" (1 - 2 February 1951) and of Chipyong-Ni (3 - 16 February 1951). These combats, during which the battalion resisted the attacks of four Chinese divisions for three days, allowed the 8th Army to score a victorious counter-offensive.

Less than three weeks later, the battalion, which had already won two American Presidential Citations, was again engaged in combat for hill 1037 and its bunkers(Hongchon region, 50 miles east of Seoul). The seizing of hill 1037 in minus 30°C cold, opened the road to the 38th parallel. It resulted in 40 dead and 200 wounded.

In the spring of 1951, the battalion crossed the 38th parallel into the Hwachon region. The sacrifice of the engineering platoon allowed to stop a new Chinese offensive. This feat of arms won the battalion its third American Presidential citation.

In the fall of 1951, the French volunteers took part in the battle of "Heartbreak Ridge" where they won fame again during a night attack. In the course of these combats which lasted a month, 60 French soldiers were killed and 200 were wounded. The complete 23rd IR failed 3 times before. On 23rd and 27th September the French battalion failed also in its all-out assaults. Monclar proposed then a night flank attack that surprised the Chinese and allowed the regiment to take the position. "Heartbreak Ridge" remains still today a famous battle for all the members of the 23rd US IR in Korea.

In the summer of 1952 the French battalion is on the "T-Bone", west of Chorwon.

In the fall of 1952, after a lethal war of positions, the battalion put a halt in Chongwon, North Korea, to a Chinese offensive toward Seoul. They occupied the "White Horse" and "Arrow Head" sectors and stopped the attack on hill 281 after having sustained a 24 hours artillery preparation with more than 25000 shells. This resistance resulted in 47 dead and 144 wounded. The Chinese losses in front of the French positions were estimated at 2000 men.

In the winter and the spring of 1953, the battalion took part in combats which kept the North Korean and Chinese forces from reaching Seoul.

After the signing of the armistice in July 1953, the French Battalion left Korea with :
- 5 French Citations to the Order of the Army
- the French Fourragère in the colors of the Military Medal
- 2 Korean Presidential Citations
- 3 American Distinguished Unit Citations
- 1898 French war crosses.

"I shall speak briefly of the 23rd US Infantry Regiment, Colonel Paul L. Freeman commanding, [and] with the French Battalion…. Isolated far in advance of the general battle line, completely surrounded in near-zero weather, they repelled repeated assaults by day and night by vastly superior numbers of Chinese. They were finally relieved…. I want to say that these American fighting men, with their French comrades-in-arms, measured up in every way to the battle conduct of the finest troops America and France have produced throughout their national existence."
General Ridgway's statement before a joint session of Congress in May 1952.

The French Navy took part also in this conflict to repel the Communist North Korean and Chinese forces: Commanded by Commander Cabanie, the frigate "La Grandière" reached the theater of operations on 29th July 1950 and immediately engaged in transport and escort missions between Japan and Pusan. In recognition of its action, the crew of the ship was awarded the Korean War Service Medal.


PS : Only two westerners have had their statues erected in Korea : General MacArthur and Major Jean-Louis of the French Medical Corps. Known as "The protective god of Korea," Major Jean-Louis was remembered by Korean Officials on October 25, 1986, during the celebration of the 100th anniversary of the establishment of diplomatic relations between France and Korea. A statue was erected in his honor on the spot where he perished, in Hong Chon, on May 8, 1951.
Last edited by David Lehmann on 01 Jun 2004 22:22, edited 2 times in total.
Top

Excellent Post David, very informative. The French Battalion was involved in many of the major battles of the Korean War and earned every bit of the glory it received. After Korea, it was off to Vietnam for this hardfighting outfit and the "Street Without Joy".

The fate of the French Battalion after Korea :

A second battalion is formed with the same men and the "Korean" regiment is created. It is the backbone of the "Groupement Mobile n°100", commanded by Colonel Barrou. Many battles in Dak Doa, Pleyrinh, along the RC 19 and in Chu Dreh before the end of the war. On 1st September 1954 the GM 100 is disbanded. 404 KIA in Indochina.

The "Korean" regiment becomes then again a bataillon and is sent to Algeria were it is stationned in Tefechoun on 10th August 1955. During November 1955 the battalion is stationned in Sidi-Mabrouk, in 1957 in Oued-Zenati and in 1958 in Aïn-Abid, everytime in the "Constantinois" sector. On 1st September 1960 the bataillon is restructured and reinforced and bacames the 156th Infantry Regiment - Korea Regiment. In 1961 the regiment is in Djildjelli and finally in 1962 it is sent to the metropole and is disbanded. The bataillon/regiment was involved in patrols, controls, and research & destruction missions and several huge operations in its sector and on the Tunisian border. 48 KIA in Algeria. Successive commanders were commandant Recasens, Lt Col James, Lt Col Sèze, Lt Col de la Casnière, Colonel Rollin.