Discussions on other historical eras.
3 posts • Page 1 of 1 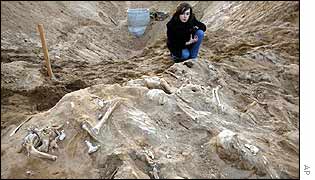 The remains of 2,000 men unearthed in a mass grave in Lithuania were members of Napoleon's army that invaded Russia 190 years ago.
When bulldozers accidentally uncovered the remains at a housing development last year, many thought they were political dissidents executed by secret police during Soviet rule, which ended in 1991.
But Arunas Barkus, an anthropologist at the University of Vilnius, Lithuania's capital, and a dozen other researchers were able to determine the identity of the skeletons.
Deputy French Ambassador Olivier Poupard said the find was the "largest and most significant" of its kind.
"We've been very moved by this discovery," he said. "Suddenly, history was more vivid. You could see it with your eyes... It's a history so much a part of the collective French memory," he told the Associated Press news agency.
...
Coins with Napoleon's image and buttons of his Grand Army were also found at the site, making it clear the remnants were those of the ill-fated French force.
Several bones belonged to boys as young as 15, probably drummers used to signal commands to troops.
Many of the skeletons were found curled up and undamaged, suggesting they were killed by cold, not cannonballs, bullets or bayonets.
...
Since Napoleon's soldiers came from all over his empire, there was never a question of returning the remains to France, said Mr Poupard.
Most of the remains await ceremonial burial in October, and a monument paid for by France will be unveiled later.
"This is an occasion, especially with Lithuania on the verge of entering the European Union and the Nato alliance, to show reconciliation between former enemies that are now partners," Mr Poupard said.
Emperor Napoleon, who then controlled much of Europe, attacked Russia in June 1812.
His 500,000-strong Grand Army, which marched into Lithuania bound for Moscow, was one of the largest invasion forces ever assembled.
Six months later, what was left of it - some 40,000 men - stumbled back into Vilnius in retreat.
Cold and desperate for food, some are said to have pillaged local medical schools to eat preserved human organs.
In temperatures dropping to -30C, dead French soldiers littered the streets within days.
The number of corpses nearly equalled the city's population.
...
The emperor blamed the weather for decimating his army.
Some historians say that was an attempt to excuse sloppy planning.
But experts say the findings in Vilnius seem to back Napoleon's version.

As much as I would like to see them re-interned, with a nice monument and park, I'm sure it will all become a documentary on TV. "Secrets of Napoleans Army Revealed" or something. Look what the French did to Titanic. Imagine what will happen to their own soldiers corpses. Watch for it on Fox this fall.
Sorry, I didn't mean to be so morbid.
A