I/JR46 and their unofficial insignias

Discussions on the Winter War and Continuation War, the wars between Finland and the USSR.
Hosted by Juha Tompuri
7 posts • Page 1 of 1

I/JR46 and their unofficial insignias

As some might have seen I have been spamming the Skulls in the Finnish Army topic lately and I have been investigating the units having skulls. Recently my attention was geared towards the Infantry Regiment 46. So for lesser spamming by me on the same topic with lots of posts in row I thought it would be best to compile this discussion on a new thread.

Many claims are so that among the army skulls were adopted first or most common along the men of Kev. Os 4. I have been researching the matter and it seems the case. I took some more look on the matter and I found out that other units using the skull emblem had officers from the Winter War era Kev.Os. 4.

Central person here is ratsumestari (later Majuri and Everstiluutnantti) Alfons Sundblad, commander of the I/JR 46. An old cavalry officer with years of experience from URR and he had led KevOs 4. He was very flashy officer wearing cavalry insignia, cavalry trousers, skull helmet and commonly held a baton.

Juha E. Tetri's book about the Finnish army unofficial insignias lists that the I/JR 46 used black skull hat badge and that the JR 46 as whole regiment wore an yellow-white-black twill insignia on their left shoulderboard. Their unofficial "rähinäremmimerkki", belt badge was an swastika with similiar color combination on the middle.

Then we start to approach the most known skull painting related picture from the Continuation War (Signal cover). It is usually attributed to the 3. Prikaati, people including myself saw it because of the twill on the shoulders.

Though from what I've seen the original picture seems to be black and white and the colored version appears to be colorized later (correct me if I'm wrong). JR 46 indeed had similar twill insignia, however it was colored yellow-black-white instead of the blue-white of the 3rd Brigade.

JR 46 unit diary lists that they were having combat exercises during the time the picture was taken (1st June, 1942)

19th April, 1942 the JR 46 had an oath ceremony held at Valkeasaari which I/JR 46 attended. Skull helmets are to be seen in pictures and while zooming in you can see the typical twill insignia on picture 84421.

Attention now shifts to the 4th June, 1942. Parades were held for Mannerheim's birthday and I/JR 46 attended the parade which their unit diary lists. So any mention of Pajari's troops wearing Skull helmets could be attributed to the 1st Battalion of Infantry Regiment 46. (as HerrHetzer noted in the another topic)

Diary entry telling of their attendance in the parade: 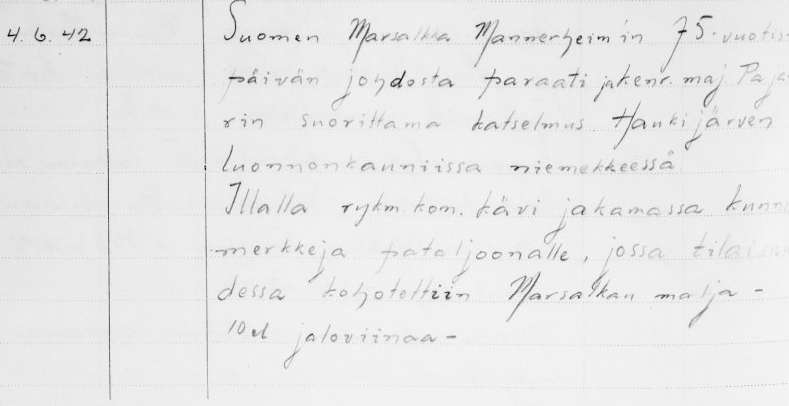 Interestingly enough SA-kuva ID 91739 has an officer whom appears to wear the insignia of JR 46 and his "rähinäremmimerkki" appears to be the Swastika of the JR 46. I have not, however identified his helmet marking. 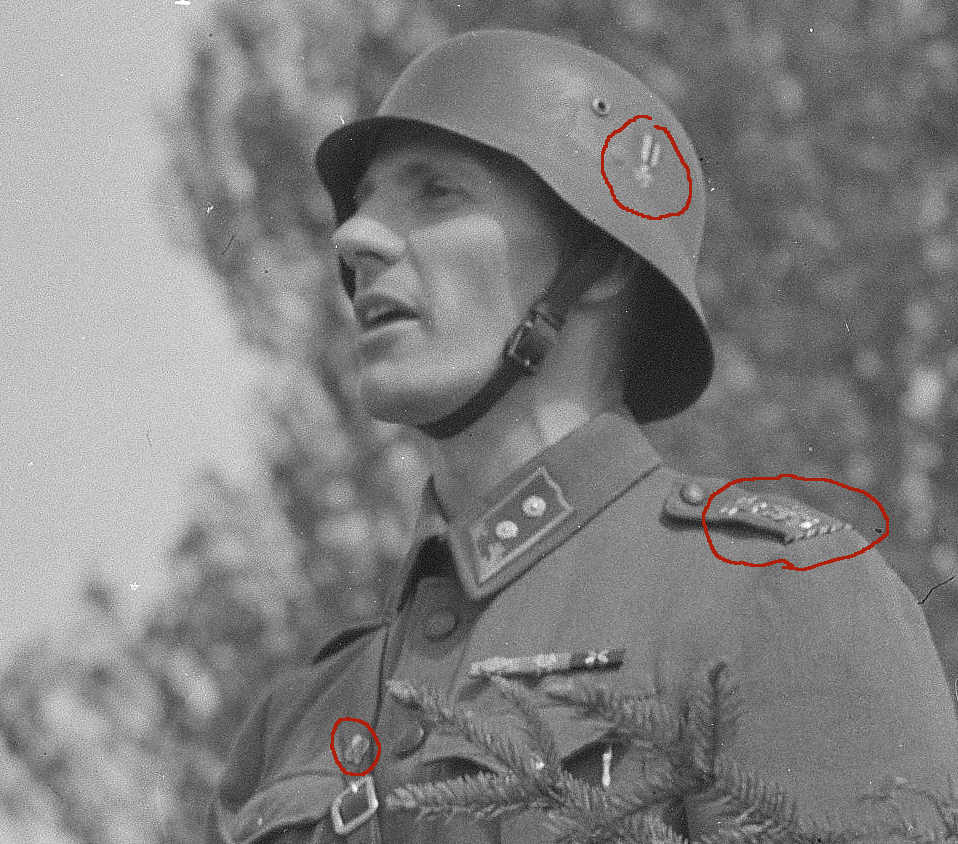 Detailed look on that: 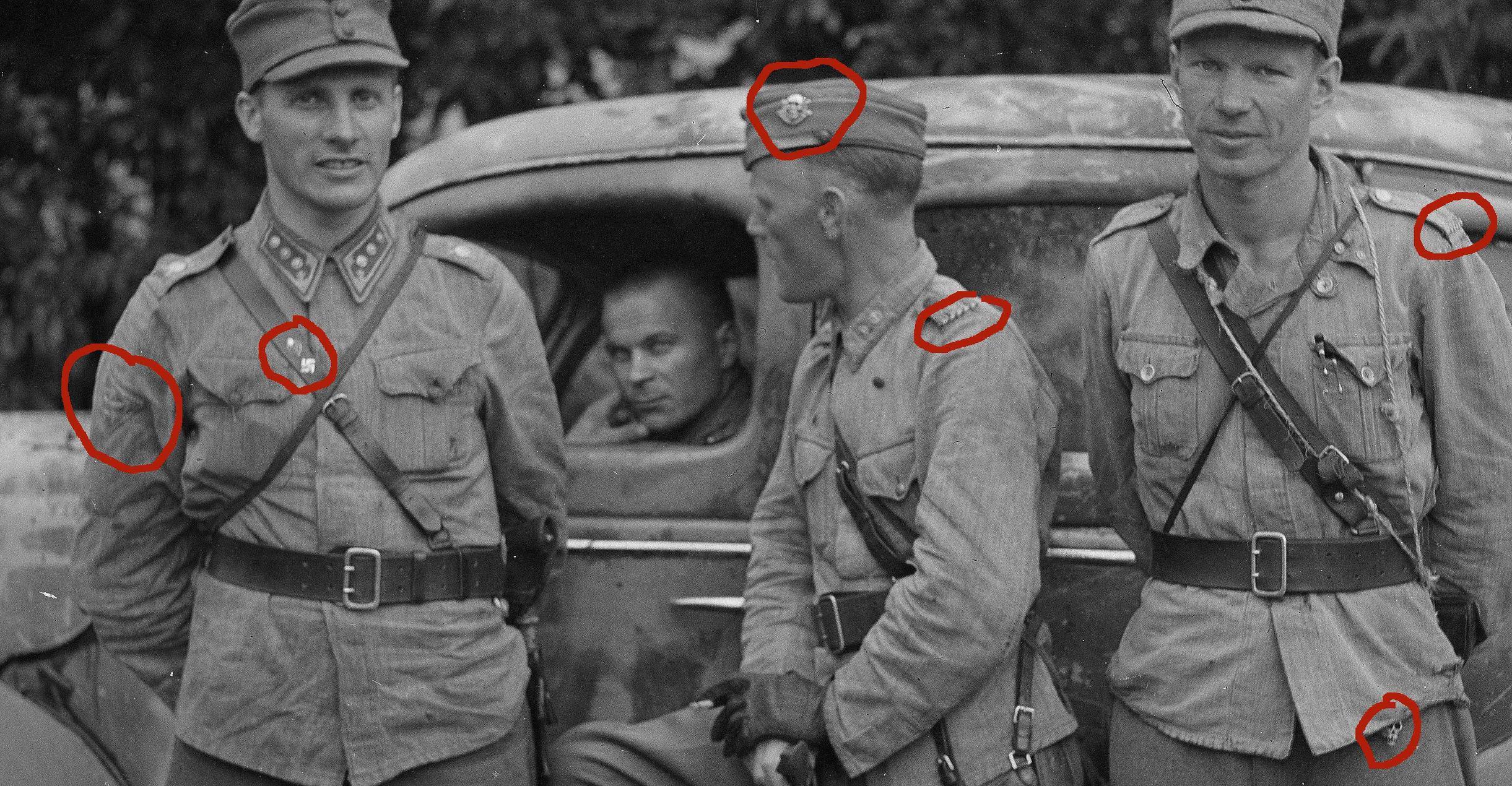 What is of interest is that everyone again excluding the Jaeger brigade officer wears the same twill insignia. What is though of oddity is that the Jaeger Brigade captain has the belt badge of the JR 46 which is a swastika. Sundblad also wears the hat badge of the I/JR 46. You can also see an skull related badge on the lieutenant on the right on his trousers.
Top

Only want to say, well spotted and well recharged on topic!

Finnish helmet from I / JR46 "Pääkallopataljoona", battalion of skulls. Helmet found near Yushina hill,Veranda river.
You do not have the required permissions to view the files attached to this post.
Top

There is a brand new book by Matti Allonen, Jari Nykänen & Joel Sjögren named "Jatkosodan asevelimerkit", Docendo. This indeed confirms that these skull helmets were idea advocated by LtCol. Sundlbad. He had ordered 4. Squadron of URR to paint the famous skulls on their helmets in the brink of the Winter War as a winter camouflage. He was then put to lead Kev.Os.4 where he carried on the same order.

Whilst commanding I/JR 46 he modified the design so it was more fitting for both summer and winter. And in 1942 an hat badge was authorized to be worn and he had requested an permission for the insignia to be officialized by the Field Marshal himself. On his letter he had told the history behind the usage of the insignia. The book has examples of the hat badge in use.

That find by PROHOR1981 seems to be painted with stencil reminding the had badge of the regiment (later 1942), whilst ismovan's one seems to be the 1941-1942 type seen in those known images.

It seems this mystery has been finally fully solved!
Top

I just recently came across this great thread and am hoping to get some opinions on my helmet that I think may be a I/JR 46 skull helmet.

It’s a German M40 helmet, F.W. Quist made, size 64, lot number DN152. The exterior and interior were repainted a gray/bluish color; however, on the interior there still remains visible some small portions of the original German factory green paint. It has no liner, a split in the medal at the dome, with patches of extensive rust, flaking, and pitting. It has the Continuation War-style skull motif; there are painted horizontal-orientated swastikas on both sides of the helmet; the rear interior skirt has the painted name “Ojala”, which online I found to be both a Finnish and Estonian last name (surname). I also blacklight tested the entire helmet.

The Continuation War skull motif looks correct to me, but as for the horizontal-orientated swastikas on both sides of the helmet – the only picture I’ve ever seen with this design is from the famous photo of I/JR 46 from April 1943 issue of “Signal”. Of the three soldiers in the photo, the soldier in the middle (facing the camera, holding the large rifle) has what appears to be a white horizontal-orientated swastika painted on the left side of his helmet (which also appears to be a German M40 helmet); I’ve included a photo circling the swastika on his helmet
9.png
.

Any comments, opinions, and feedback would be most welcomed. Thank you!

-Preston
You do not have the required permissions to view the files attached to this post.
Top

A helmet in Säkylä Winter and Continuation War Museum.