Discussions on the Holocaust and 20th Century War Crimes. Note that Holocaust denial is not allowed. Hosted by David Thompson.
46 posts

So it seems that he did build a bridge over the Bug river to get there.

You are saying that there is only one bridge crossing the Bug? Surely anybody who looks at this photo can easily see that there are two bridges crossing on the top and bottom (where they are destroyed) photographs, so I am confused as to what you are saying.

Yes, another bridge was built next to the two destroyed bridges, but the top photograph unambiguously shows two bridges crossing the Bug in May 1944.
Top

I enlarged the May 1944 photograph in case that helps:

This is obviously not a single, normal-wide line which is crossing the Bug. It is two bridges.
Top

It is two bridges.

Yes. Bridge on the right is a road one.
You can see it on 1944 German map.
The more you let yourself to go, the less others will let you to go.
F.Nietzsche
Top

I suppose I am confused because earlier you said that there was no road bridge. But there clearly was a road bridge which was built after 1914. That provides a route from the Treblinka I quarry all the way to Malkinia, assuming that this narrow-gauge industrial railway was constructed along that road. But it seems it is your position that the 6 km improvement to the Treblinka spur pre-war did not happen? If it did happen, where was it built if not along the road through Poniatowo, and across the Bug on this eastern bridge, where I drew the red path before?
Top

So it seems that he did build a bridge over the Bug river to get there.

How do you know a road bridge was built by Łopuszyński?

BTW. If you can find it, I would like to see any details of Łopuszyński's project.
I couldn't find that line (you assume up to Malkinia) as listed in 1938 publication which has details of all state and private railroads in Poland.
Last edited by GregSingh on 11 Oct 2021 06:00, edited 1 time in total.
The more you let yourself to go, the less others will let you to go.
F.Nietzsche
Top

Regardless of who it was built by, that bridge connects Malkinia all the way to the Treblinka quarry through the road that runs through Poniatowo. So when considering the question of where the 6km of Treblinka spur addition was added pre-war, it is quite possible that it was added along this path represented by red line I drew in the previous image.

Another alternative is that the Treblinka spur was extended directly parallel to the Malkinia-Siedlce. I think this is less likely.

Yet another alternative is that the there were no extensions made to the Treblinka spur pre-war by Łopuszyński as you implied, and the Treblinka quarry never connected to Treblinka station pre-1942.

However, if the Treblinka spur was extended pre-war as claimed by Łopuszyński, then the red path I drew in the previous post would connect from the quarry all the way to the eastern Malkinia bridge.
Top

To confuse things more, if you look at NARA T-78 Roll 607 (Ostbau 1943), you will find that main link Malkinia - Siedlce was to be upgraded to two tracks with completion date 1.1.44.
So if there was any narrow gauge there (as your link in red), it was replaced by second normal gauge from Malkinia to Treblinka station and beyond to Siedlce sometime between Sep. 1943 and begining of 1944. If we look carefully at your photo of destroyed Bug river bridges - both had tracks on them.

I'm still not sure where the alleged post-war photo with parallel tracks at post #17 was taken?
If it was taken in vinicity of Treblinka station, both tracks had to be normal gauge. Why after the war anyone would convert one of them back to narrow gauge?
The more you let yourself to go, the less others will let you to go.
F.Nietzsche
Top

I agree that there appears to be tracks on both bridges crossing the Bug, but why would both be the same gauge, when a branch would do? It seems that if there was a need for two bridges crossing the river, they would be different gauges to accommodate different types of traffic, such as industrial railways which were often narrow gauge.


I'm still not sure where the alleged post-war photo with parallel tracks at post #17 was taken?

This photo was taken circa 1962, which would explain why it does not show up in aerial photographs: 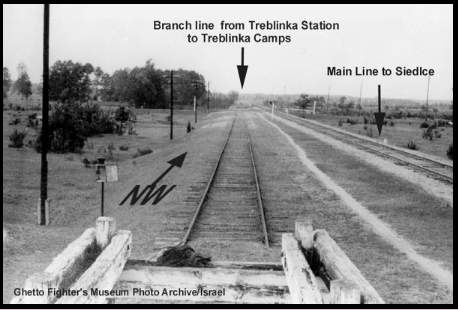 I do not think this was the Treblinka spur due to the fact it is not visible in 1944 aerial photographs. In the Fall 1944 photograph there is a clear path where the Poniatowo "road" turned into the Treblinka spur, which is another reason I believe the spur travelled that route: 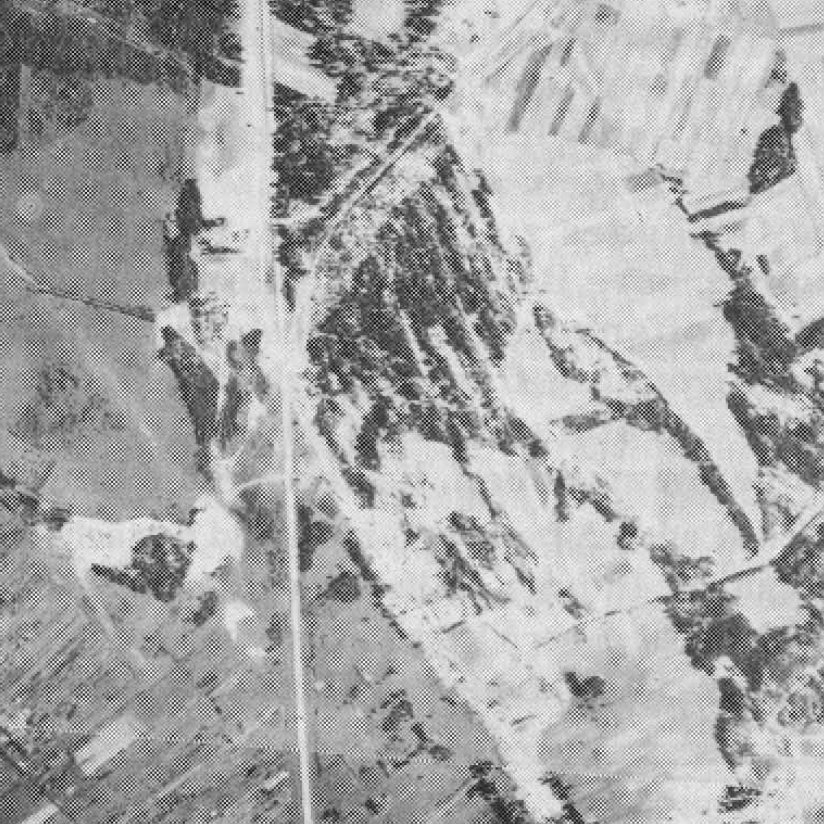 That image to me looks like there is a railway coming from Poniatowo which turns into the Treblinka camps. 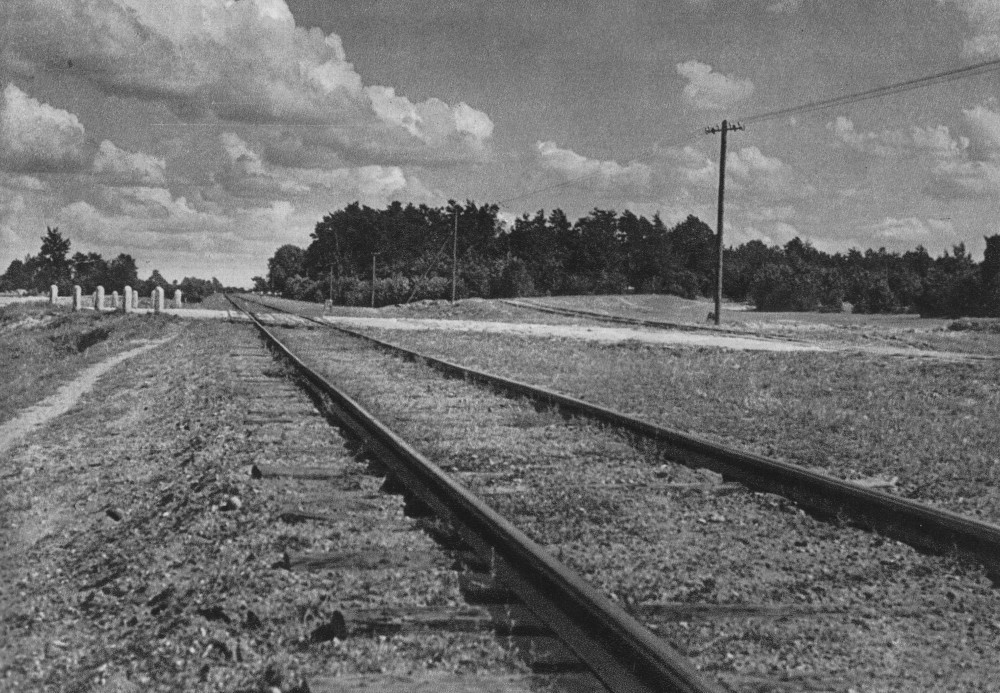 This photo does not seem to show the spur branching from the main line after the road intersection with Poniatowo. The railway seems to me to be turning from Poniatowo in accordance with the path visible in the Fall 1944 photograph.


A later photograph of the Treblinka spur rails embedded in the road also seem to suggest that the spur was a narrow gauge railway, this one was taken in 1962: 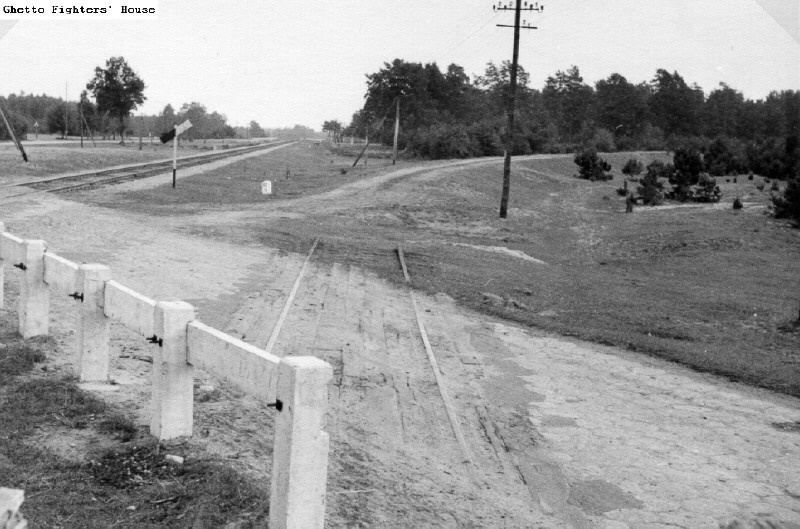 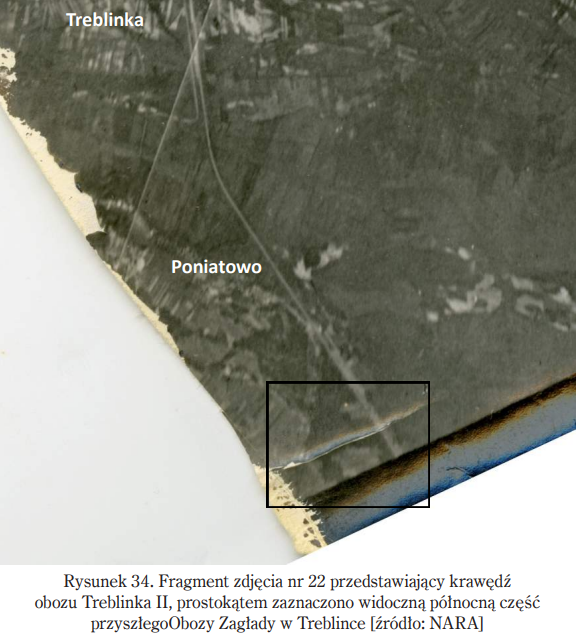 This 1940 image shows that the railway to the quarry was built during or before 1940, and I believe it also shows the railway turning from Poniatowo rather than branching from the main line. Here is that area of the photograph with greater zoom: 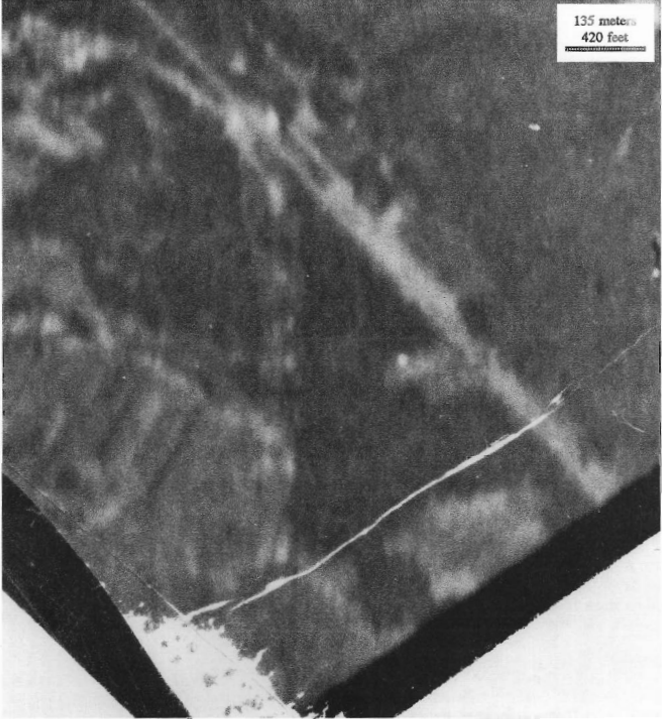 Where did the narrow-gauge Treblinka spur branch from in the pre-WWII period for example? How did it connect to the surrounding area? That's unclear from your first screenshot.

As I wrote before unfortunately none of the maps show any parallel tracks to Treblinka, as on your post war photo.

Pre-WWI (1914) map I attached shows Treblinka spur not connected to main line, as you can see it just reaches the road and stops there.


WWII map shows Treblinka spur connected to the main line just after passing the road, again no parallel track to Treblinka.
Connection was at Majdan Kupietyński.


which show more context with the surrounding area (i.e. to Malkinia)


You already have Malkinia - Treblinka on the map I posted earlier.
Click on map to load it in full resolution.

I'm not too familiar with the keys of the rail maps, but wouldn't this WWII photo suggest a dual track/ parallel track to Treblinka with the black line? 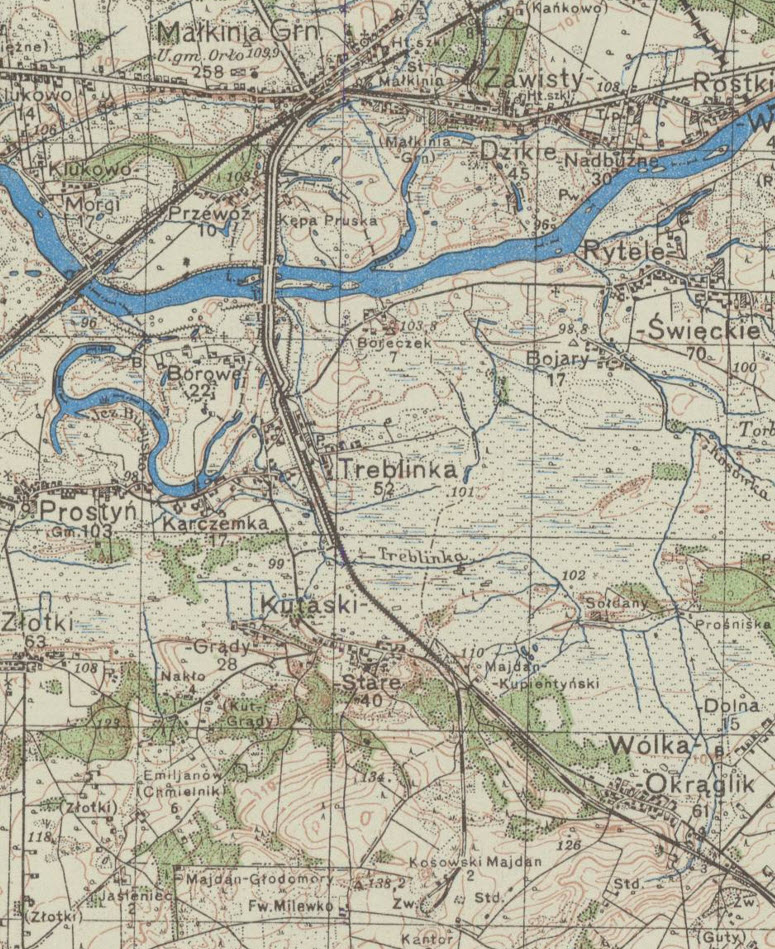 Here is an aerial photograph of Treblinka station taken in "Fall 1944": 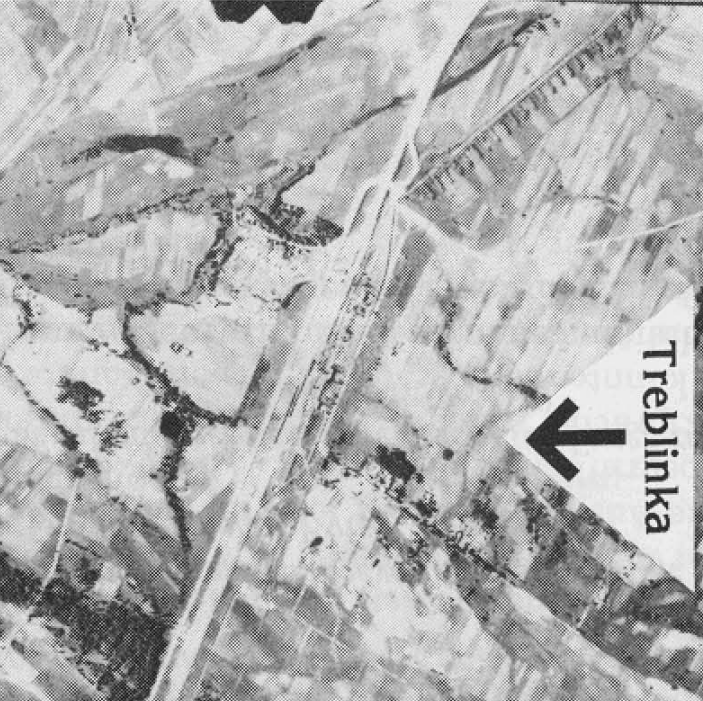 Can anybody provide any insight into what this array of objects is in the top right of the photograph? It seems to have stretched along both sides of the Bug, here's a different crop/reproduction of that same 1944 photograph: 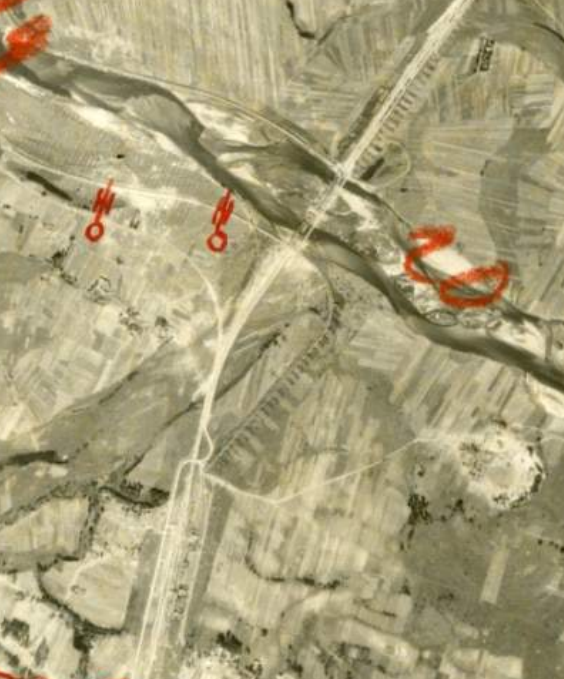 So these objects appeared on both sides of the Bug. In an earlier photograph attributed to May 1944 these objects do not appear visible, although the land seems disrupted and appears different from the surrounding area:

In the Fall 1944 photograph there are at least a few dozen of these large objects. Surely there most be some sort of information on what they are?
Top

at least a few dozen of these large objects. Surely there most be some sort of information on what they are?

They appear on WWI old Russian 1915 map.
Some kind on earthworks, long humps.
Perhaps it has something to do with the large swamps just east of the road/railroad.
Support of the embankment from the times when the railroad was built in 1887 ?
On September 1944 aerial photo we can see some of them overgrown with trees.


1915.jpg
Sep 1944.jpg
You do not have the required permissions to view the files attached to this post.
Last edited by GregSingh on 19 Oct 2021 01:48, edited 3 times in total.
The more you let yourself to go, the less others will let you to go.
F.Nietzsche
Top

That seems quite possible, that area today is overgrown with trees but in 2011 satellite images, traces of these objects were still visible in the ground:

A closeup of an exposed section:

Do you know in what year the photograph you posted was taken? It seems odd for the trees to grow in this way.

Oh I can see that you have a September 1944 aerial view. Would you also be able to provide a snippet of the area where the Malkinia-Siedlce line branches into the Treblinka spur? Or was the Treblinka spur an entirely parallel line from Treblinka station?
Top

Would you also be able to provide a snippet of the area where the Malkinia-Siedlce line branches into the Treblinka spur?

Unfortunately I don't have a full resolution photo of that area.
You need NARA Luftwaffe aerial reconnaissance images GX 12225, photo #258.
The more you let yourself to go, the less others will let you to go.
F.Nietzsche
Top

Actually converting 5-6km of track would take less than half a day for a skilled crew, a bit longer perhaps if force labour was used.
Perhaps after Warsaw Ghetto was liquidated - there was no need for a normal track to the camp anymore and reloading at gravel pit loading ramp wouldn't be needed as well as small locomotive would be able to work all the way from gravel pit to Treblinka train station on narrow track.


As of 2020, the Treblinka Museum has this description published on their website:


The gravel pit, the Małkinia railway station and the regulation of the Bug river were places of very hard labour of prisoners, often resulting in physical exhaustion and death. At present, it is impossible to estimate how many people lost their lives in these works and what benefits the commandant and individual companies using the prisoners had.

As a rule, all newcomers to the camp worked for some time in the gravel pit. The prisoners did the hardest work of extracting gravel and loading it onto wagons, the so-called “cradles”. These wagons were driven on “narrow” tracks and were pulled out of the middle of the gravel pit by a small steam engine. On the ramp gravel was transhipped from cradles to “wide” wagons. From there, the whole transport was transported to the railway station to Treblinka and further to its destination. The work in the gravel pit was very exhausting and after a few weeks the prisoners fell into weakness. Watchmen guarding the prisoners in the gravel pit were cruel. Those unable to work, the sick, the weak, usually died quickly or were killed by SS-officers.

In the gravel pit, the prisoners were not even allowed to look around, as this was considered an attempt to escape. There was also a group of Polish wage workers who were paid for their work. They mainly operated the narrow-gauge railway and transhipped gravel on the ramp.

The prisoners also worked by the nearby Bug river. They worked on erecting floodbanks in the vicinity of Małkinia and on drainage works, which consisted in draining marshy areas.

A group of prisoners worked on a farm producing for the needs of the camp, and located outside the camp, about 500 meters west of the fence, on the so-called Milewek.

So the Treblinka Museum is claiming that that there was a narrow-gauge railway driven by a steam engine inside the gravel pit, which hauled the material to the platform, where it was dumped and transferred to the main transport.

This is the first I am hearing about a narrow-gauge steam engine at the gravel pit inside TI, are you aware of any other sources that corroborate this? I wonder if the Museum's claim here was inspired by their finding of a narrow-gauge track at TI earlier that same year in 2020: 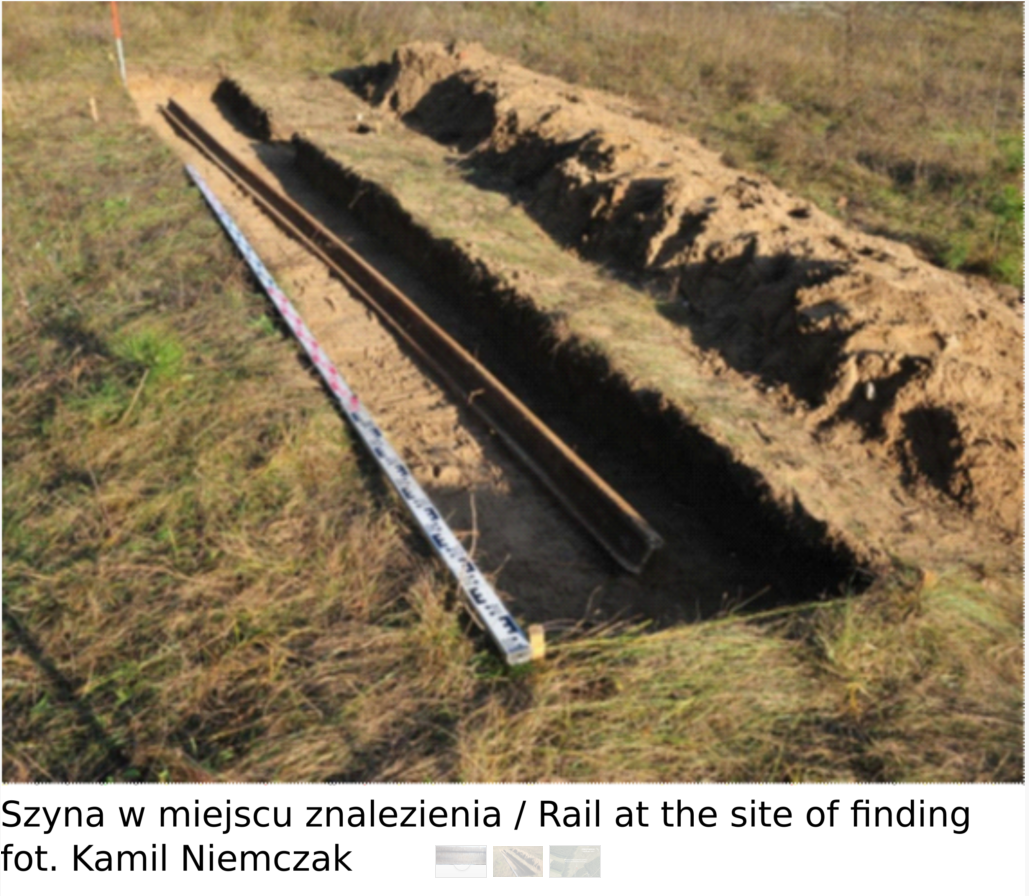