Discussions on the Holocaust and 20th Century War Crimes. Note that Holocaust denial is not allowed. Hosted by David Thompson.
46 posts

Once again, any information on the SS officers & men who served at the Majdanek Camp will be most helpful. Thanks Everyone.

Karl Otto Koch was born at Darmstadt in 1897. He was a bank clerk before joining the German Army during the First World War. He was captured by the British army and was held as a p.o.w until October, 1919. Koch joined the Nazi Party in 1930. Later he became a member of the SS. In 1934 Koch became a senior official in Lichtenburg Concentration Camp. Two years later he became the commandant of Sachsenhausen Concentration Camp.
In May 1937, Koch married Ilse Koch, one of the female guards at the camp. Later that year Koch was appointed commandant of Buchenwald, and his wife became an SS Aufseherin (overseer) at the camp. Known as the "Bitch of Buchenwald" she liked to ride through the camp where she selected prisoners who displeased her to be whipped by SS guards. She also collected lampshades and gloves made from tattooed skins of specially murdered concentration camp inmates. In September, 1941, Koch was transfered due to tax evasion charges by an SS court and appointed commandant of Majdanek, a Soviet prisoner-of-war camp run by the Waffen SS. In August, 1943, Koch was arrested by the Gestapo and charged with embezzlement and forgery. Found guilty, he was executed on 26th April 1945.

Does anyone have anymore information?

some add datas on K.O. Koch

Try that link. It will take you to a link page. Maybe you will find your answers there.

Great info you have posted here! Do you have perhaps somewhere also a list of DACHAU camp personnel between 1944-1945, including ordinary guards?

do you have anymore information on other guards or/and their fates.

Liebhenschel was Born on 25th November 1901. He joined both the Nazi Party & SS. He was aide-de-camp at the Lichtenburg Concentration Camp in 1934 and worked in the Inspectorate of Concentration Camps (WVHA) in Berlin. In November 1943 he was transferred to Auschwitz where he was given the post of commandant, after RudolfHöss of the base camp and the commander of the garrison. In May 1944 he was appointed commandant of Majdanek, succeeding Martin Weiss, and after the evacuation of the camp in July 1944 he was transferred to Trieste to the office of the Higher SS and Police Leader Odilo Globocnik.
Captured at the end of the war, he was put on trial by the poles, and on 22nd December 1947 the Supreme National Tribunal in Kracow pronounced the death sentence in his case at the trial of members of the SS garrison of Auschwitz/Birkenau. Liebhenschel was executed on the 28th January 1948. 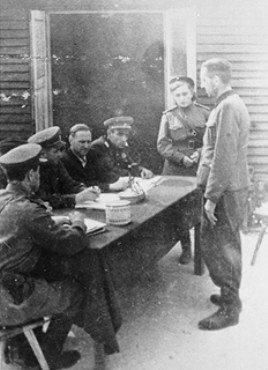 (Thernes being interrogated by the Russian Authorities)

Thernes was a member of the Majdanek administration when the camp was liberated by the Soviets. The final decisions regarding the camp were his authority and he was the senior officer captured. Tried with three other guards and two kapos, Thernes was found guilty and sentenced to death on the 2nd December 1944. Thernes along with Gerstenmeier, Vögel, Schöllen and the Kapo Stalp was executed the day after on the 3rd.

Does anyone else have more info on him?

Do you have a date of birth for Thomas Ellwanger?

I'm sorry I don't have a d.o.b for Thomas Ellwanger

I have some info on the Maidanek trial. The former deputy commandant Hermann Hackmann and other former camp staff were charged with murder. The Maidanek trial was the longest in German judicial history. The trial began on november 26 1975 and ended with a verdict on june 30 1981. Originally 17 persons were accused, 11 men and 6 women. Unfortunately i don't have names but i will continue to search.

funnily enough when i saw your post I just started working on that particular trial. I know the dates the trial ended and concluded and I have 15 of the 16 defendents by name. All i need to complete it is the last defendents name and the date Alice Orlowski died, she pass away during the trial, I think in 1976. So if you could find those things out for me, I would be very gratful.

Here are the defendents I know of:

Can anyone help me?

majdanek trial
15 defendants
a sixteenth defendant alice orlowski , had already died
by the end there were only nine defendants on trial
two had fallen ill =reinartz ,johanna zelle .her quirk, according
to a witness ,was to give a child a sweet and then seconds later
shoot it dead.
on 19 april 1979 judge bogen had ordered the acquittal of four others