Beheadings in the Third Reich

Discussions on the Holocaust and 20th Century War Crimes. Note that Holocaust denial is not allowed. Hosted by David Thompson.
7173 posts Eugen Grüber was guillotined in Munchen Stadelheim prison on 4 September 1941. He was 20 years old.

At the end of the article is the description of the execution. It is important to note that as of September 1941 Stadelheim fallbeil still had the bascule to which the condemned was strapped. Recently I also posted a witness description of Stadelheim execution chamber in 1940 and that person too mentions the bascule. We know that later on, as executions became more frequent, Reichhart had the fallbeil modified and the bascule was removed. When the Scholl Siblings and Probst were beheaded by the same guillotine in February 1943, the bascule was no longer on it.

The following phrase was used in the report, as it was used in thousands of subsequent guillotine executions in Germany. This phrase or some slight variation of it became a routine part of almost every execution report.

After the execution, the body of the executed man was handed over to the Munich Anatomical Institute.
Top

Summary of executions for all Central Execution Sites

Type of fallbeil at each execution site

Berlin Plotzensee: Modified Mannhardt, moved from Bruchsal prison. The bascule was removed and different bench with straight rear legs was installed. A one of a kind metal head bucket was also added.

Bruchsal: All metal fallbeil resembling a Mannhardt, one of a kind

Hamburg: old wooden fallbeil, replaced with a modified Mannhardt which used the old fallbeil blade. The bascule was removed from this Mannhardt and a metal head bucket added.

Stuttgart: old wooden fallbeil (replaced with a Tegel at a later date?)

Weimar: old wooden fallbeil, replaced with a Tegel at a later date

If some of these are not correct, feel free to comment, It would be interesting to list where each fallbeil is now. Some were likely destroyed at the end of WWII, and some were still used after WWII.
Top

These images of Vienna Regional Court guillotine execution room are different from those already posted. In the second photo you can clearly see the hole in the tile where the metal stud holding down the front fallbeil wooden support was driven in. This means that the guillotine was facing the window. The memorial candleholder is set directly over the guillotine floor drain. It is likely that the entire window wall and the wall to the right was also tiled, but tiles were removed at a later date. I would also assume that the window either had a black curtain hiding it, or had shutters which were closed during executions. And perhaps there also was a door in the wall to the right of the guillotine through which bodies were removed into the adjacent room. This execution room was located close to the main court entrance and was formerly a laundry room. There was also an anteroom where the prosecutor read the verdict for the last time to the condemned. 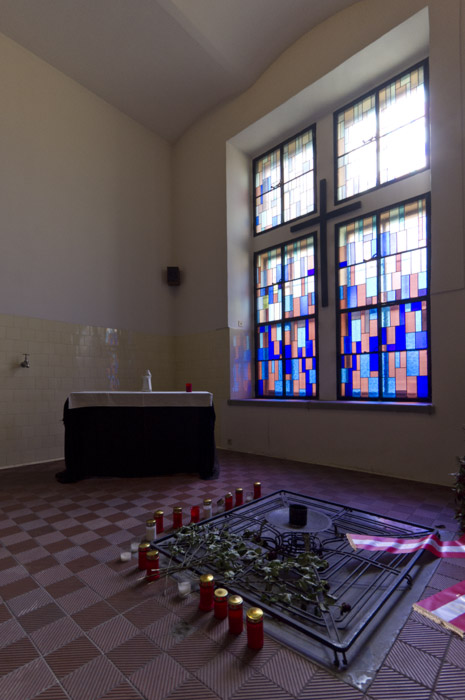 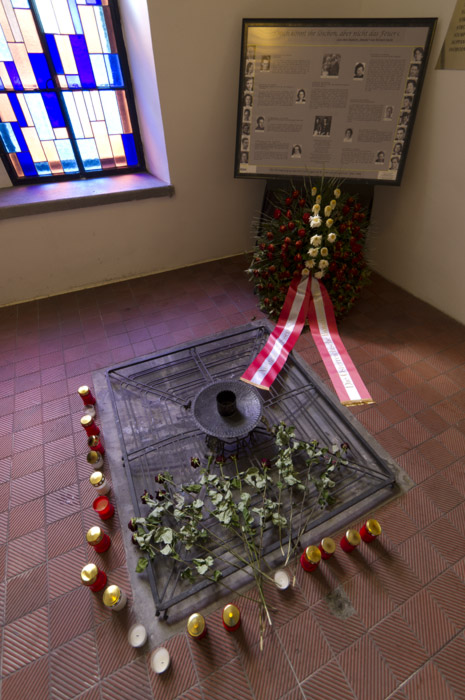 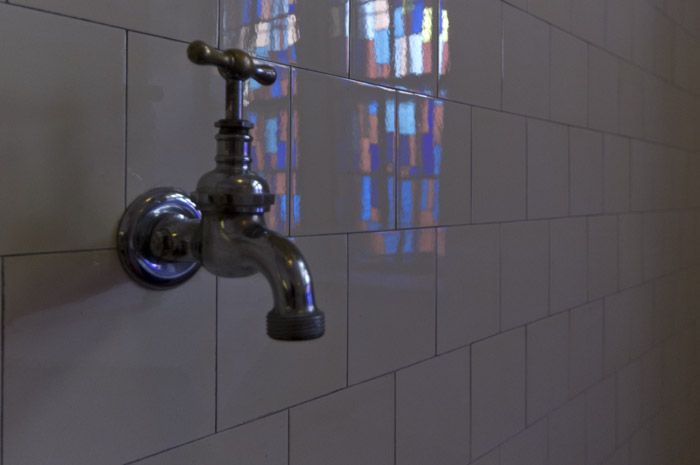 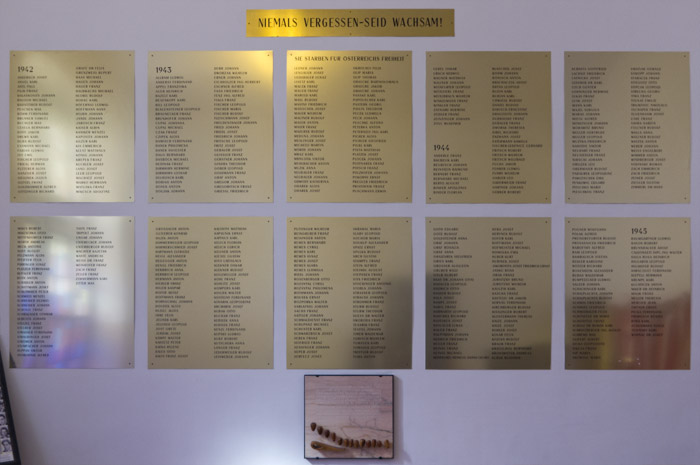 In addition to 1356 beheadings during the Third Reich era, East Germans used the same guillotine in the same location between 1952 and 1956 and beheaded 66 people with it. After that the guillotine was moved to Leipzig where it was used until 1966. During its last years of use, the guillotine malfunctioned frequently, and therefore East Germans decided to abandon guillotine executions and use an unexpected shot to the back of the head instead.
Top 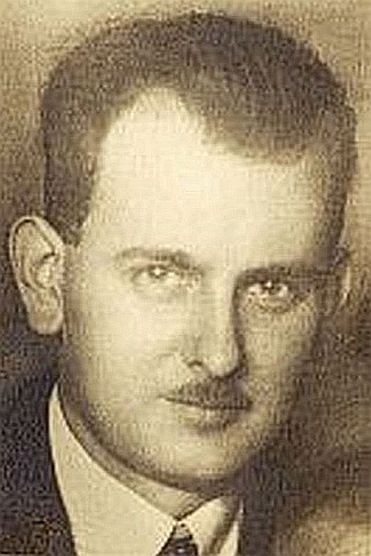 
Dr Frantiszek Witazsek was guillotined in Poznan on 8 January 1943. His head was preserved in a jar of formalin with an inscription:
"Kopf eines intelligenten polnischen Massenmorders” (Head of an intelligent Polish mass murderer.) 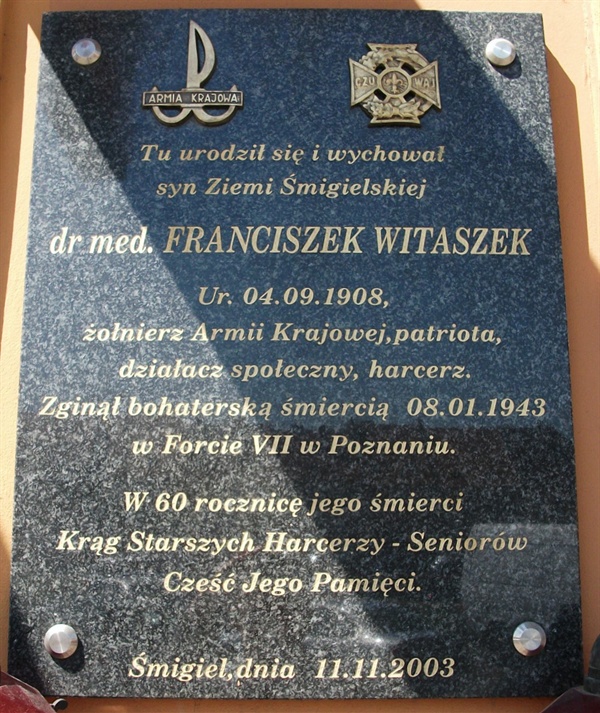 Mstislaw Frankowski was guillotined in Berlin Plotzensee prison on 20 March 1942. His body was handed over to the Humbolt University Anatomy Department in Berlin.

Catholic priest Joseph Müller was guillotined in Brandenburg Gorden prison on 11 September 1944. He was sentenced to death and executed for telling a political joke about Hitler and Göring.

"According to the 2007 documentary Laughing with Hitler, the joke was about a soldier on his deathbed, who asked to see the people for whom he was laying down his life. A portrait of the Führer was laid on his one side, a portrait of Göring on the other. Then, he gasped: "Now I can die like Jesus Christ, between two criminals." 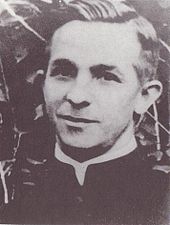 Were There Any Generals Beheaded By This Method ???
Top

That is comparable with the number of persons executed by the French Revolutionary Government during the Reign of Terror in 1793-94.
Top

Re: Summary of executions for all Central Execution Sites

Re: Summary of executions for all Central Execution Sites

Some Wehrmacht soldiers were beheaded, most were shot. These numbers also include Wehrmacht soldiers who were beheaded, but do not include those victims who were shot. Most executions sites on the list had only a guillotine, some also had a hanging beam (e.g. Pankrac, Brandenburg-Gorden, Plotzensee, Poznan), so some people were hanged at these sites, but the numbers listed per execution site are mostly those of beheaded victims. These execution sites do not include shooting sites. For example, 1075 people were beheaded in Pankrac prison (1079 is incorrect, as 4 of those included were actually shot elsewhere), and there are no records of those who were hanged in the same execution room. All those executed in Vienna Regional Court were beheaded, those who were shot were taken to Kagran firing range in Vienna. The number of those shot there are not included. Similarly, in Prague the condemned were shot at Kobylisy firing Range, but those numbers are not included among the 1075 Pankrac guillotine victims, only 4 were added by mistake, hence the 1079 total for Pankrac.
Top

A memorial plaque on the front wall of the prison in Leipzig on Alfred-Kästner-Straße, which was the last Central Execution site of the GDR. This site was used from 1960 to 1981. The death penalty was abolished in the GDR in 1987. The executions were performed with a guillotine until 1968 (supposedly the same Nazi guillotine used in Dresden), after 1968 the executions were carried out by an unexpected shot to the back of the head. 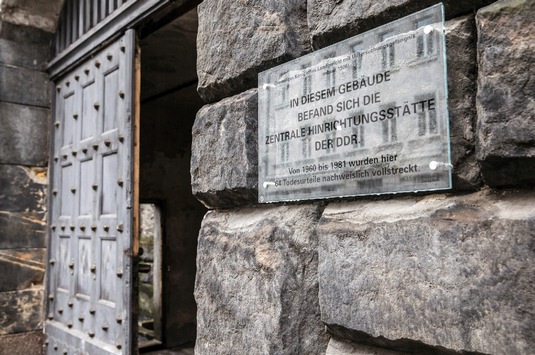