Discussions on the Holocaust and 20th Century War Crimes. Note that Holocaust denial is not allowed. Hosted by David Thompson.
1 post • Page 1 of 1 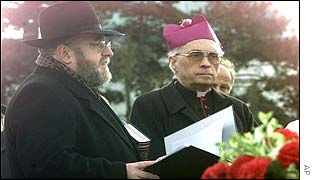 "The remains of victims of the Nazi period in Austria whose bodies were used for medical research have finally been buried in the capital, Vienna.
The body parts had been stored at the University of Vienna and were only found after an investigation launched in the 1990s.
...
Between 1938 and 1945, over 1,300 bodies of people executed under the Nazi justice system were signed over to the University of Vienna and its Institute of Anatomy.
The bodies were used for medical research, and possibly also provided the basis for anatomical illustrations in the classic medical textbook - Pernkopf's Anatomy.
The Atlas of Topographic and Applied Human Anatomy textbook was written by the then-rector of the University of Vienna, Edward Pernkopf, who was a member of the Nazi party.
Many of the victims were killed for the crime of resistance against the Nazi regime."