Discussions on the Holocaust and 20th Century War Crimes. Note that Holocaust denial is not allowed. Hosted by David Thompson.
10 posts • Page 1 of 1 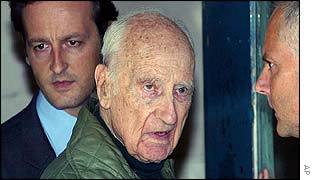 Maurice Papon - a former French police chief imprisoned for his role in sending Jews to Nazi death camps - has been set free on health grounds.
The 92-year-old walked out of jail on foot and did not speak to journalists as he boarded his lawyer's car to be driven to his home in Gretz-Armainvilliers, east of the capital.
About 30 riot police were on hand to protect Papon from angry bystanders shouting "Murderer," "Papon in prison" and "Shame."
The decision by a French appeals court to order his release has been criticised by the French Government and human rights activists due to the gravity of the crimes involved.
Papon was jailed in 1999 for complicity in crimes against humanity for the deportation of more than 1,500 Jews.
The appeals court accepted two medical reports which concluded that the former Vichy official - whose career flourished after the war - was virtually incapacitated and should be set free.
Papon was the highest-ranking French official to be sentenced for helping the Nazis and his six-month trial reopened painful memories about collaboration with Hitler's forces in occupied France during World War II.
Justice Minister Dominique Perben said he and his ministry believed Papon should have stayed in jail "taking into account the seriousness of the charges against him".
...
The release of Papon was met with horror among campaigners for victims of the Nazi Holocaust.
Nazi hunter Serge Klarsfeld, who gathered much of the evidence used at Papon's trial, had fought for Papon to stay in prison.
"What I hope is that this sick man doesn't turn out to be healthy," he said.
...
He was found guilty of signing orders that led to the deportation of more than 1,500 Jews from Bordeaux between 1942 and 1944.
Most were sent to the Auschwitz concentration camp and all but a handful died.

Does he regret the crimes?
Top

The French Government says it is looking at ways of overturning the release of the convicted war criminal Maurice Papon.
The decision by a Paris court on Wednesday to free him on grounds of ill-health caused uproar both within the government and among human rights activists.
Papon, 92, had served three years of a 10-year sentence for helping to send more than 1,500 French Jews to Nazi death camps during World War II.
Justice Minister Dominique Perben said that feelings were "running high" over the release and he was investigating grounds for an appeal.
"I've asked my services in the chancellery to study this affair to see if we can lodge an appeal," he told French radio.
Mr Perben recalled that President Jacques Chirac had refused to pardon Papon three times and shared "the strong emotions of those directly involved in this affair".

hmmm...I still don't understand if he regrets what he has done.
Top

charlie don't surf wrote:hmmm...I still don't understand if he regrets what he has done.

Yes, I kind of guessed that.

Charlie,
one thing for sure was his arrogance for the full lenght of the trial.
Top

charlie don't surf wrote:hmmm...I still don't understand if he regrets what he has done.

Papon has said he feels no regret for his wartime acts. His lawyer, Varaut, said Wednesday that he did not expect Papon to change his mind. "It would be unthinkable for him to express a form of remorse," he said.

Hope this helps. The reasoning behind his reluctancy to apologize however, was not stated. I'm sure you can attribute this stance to the many others who felt no remorse, simply saying they were following orders. I'm sure this was the case for a few, but the majority took some pleasure in their dastardly deeds and were punished accordingly.
Top

According to this morning's New York Times, the French Government has decided to appeal the decision of the three-judge court freeing Papon.

The role of Papon has been much exaggerated, in particular the designation of "Nazi collaborator" and the references to his having "sent Jews to death camps".

In 1942, Papon was Deputy Prefect for the departement in which Bordeaux is situated. Among his areas of administrative responsibility was Jewish Affairs, a department that had been established by the French Government under the new Head of State, Marshal Petain, independently of any German inititative.

In 1942, Papon received a request from the local German police representative to arrest and hand over to the German occupation authorities a certain number of Jews for the purpose of transport to Germany for labour. The request was directed to Papon due to his administrative responsibility for Jewish Affairs.

The reason why such a request was made is that, under the terms of the armistice, the German occupation authorities had no powers of arrest in the occupied zone, except in the case of persons posing a direct threat to the security of the German forces in the zone. In the German occupation authorities wished to have anybody else arrested, eg Jews, they had to request the French Government to do it. In point of fact, all the Jews deported from France had been arrested by French authorities at German request.

Papon continued to hand over groups of Jews to the German authorities upon request. It would be true to say that all the Jews deported from Bordeaux were delivered to the German authorities under authorisations issued by Papon. But in authorising those deliveries, Papon was doing no more than was done by hundreds of French prefectural administrators all over the country. It is a gross exaggeration to say that Papon carried out deportations, or was complicit in the deaths of most of those deported.

It appears that Papon was targeted by the French Jewish Lobby due to his high office after the war. In fact, his actions were the same as those of many members of the French administration who were required by the Government of France to hand Jews over to the German authorities.
Top
10 posts • Page 1 of 1