Discussions on all (non-biographical) aspects of the Kriegsmarine except those dealing with the U-Boat forces.
166 posts

Thanks for this interesting link, there are 3 other MFP pictures on this location on this site

Greetings
From the Netherlands
You do not have the required permissions to view the files attached to this post.
Top

Hallo to all!
Please excuse me this quite off-topic question:
Does anybody know about a book dealing with the traffic of supplies to Tunisia, German side?
I am trying to understand which boats and ferries took the Tigers of 504 in Tunisia, when, and from which harbour did they leave...
Do you think is that Possible?
I am trying to write the history of Panzer-Abteilung 504, and this is a question that remains open to me...

I know a number went on the Italian Train ferry Aspromonte. I will dig up some pictures of them being loaded.

I have very much on the Tgier's side (pics and books), but I miss everything on the Navy side.

Take a look in the book "DerTiger" volume I Schwere Panzerabteilung 501 writen by Volker Ruff
There are some pictures and a list of the used MFP.

Thank you Rocketman, I'll give a look! 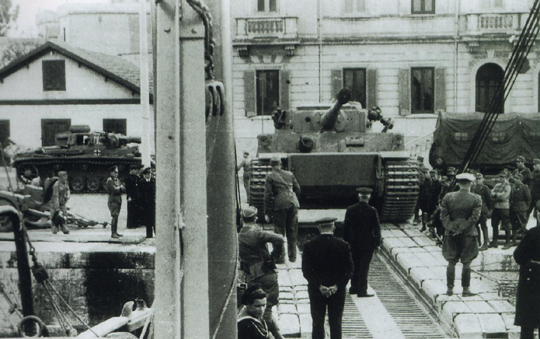 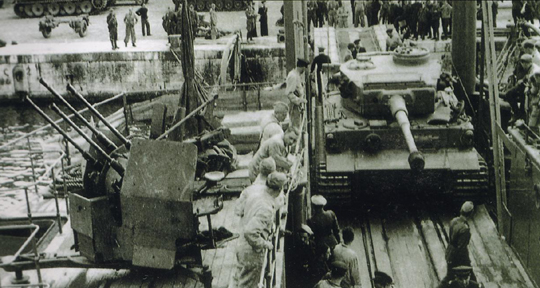 If the Tigers were transported on the Mn Aspromonte, it had to be on 22-23 November 1942. The Aspromonte sailed from Reggio at 1230hrs on the 22nd escorted by the destroyers Procione, Ciclone, Ardente, and Uragano. The convoy arrived at 1845 on the 23th at Biserta (Bizerte). The Aspromonte returned to Trapani 24-25 Novemeber. Aspromonte sailed again on the 1 December as part of Convoy H from Palermo. The convoy was intercepted by Force Q and the Aspromonte was hit by torpedoes from the Sirius and sank at 0129hrs on the 2nd. Source is La Difesa del traffico con l'Africa settentrionale dal 1 ottobre 1942 alla caduta della Tunisia (volume VIII of the Italian official naval history) pages 150-156 and appendice I.

Thank you very much, Jeff!
Unfortunately the first Tiger tank of 504 arrived in Sicily on 12th March. The second convoy of four Tigers arrived on 22nd March with MFPs. I have found a trace, but no specific information. We are closer to the end of the campaign, and it looks like in this period the studies are focused on the victory. At least too me it is harder to find precise info.
Thank you anyway and best regards.

Agreed. As the Aspromonte was identified as a possible ship involved in moving Tigers, her loss in 1942 precludes any involvement with SchPzAbt 504.

The following is using the information found at Tiger Unit Histories . I have cross-referenced the dates for SchPzAbt 504 with the convoy records in the Italian naval history cited above.

From the data below, I would assume that the Tigers were likely transferred by Marinefährprahm rather than regular shipping. The movement dates of the Marinefährprahm better match the given dates/ports on the website and are the only shipping that matches the 16 April date. I haven't provided the data for the Italian motozattere as I felt these tanks would be transported on German vessels.

16 April - 1 last Tiger to Bizerta. No convoys fit this date. 4 German Marinefährprahm did sail from Marsala on 15 April and arrived at Biserta on 16 April at 1140.

Jeff, you're great!
As the departure was reported as Trapani, it matches completely with the data you supply!
Now I'm at work, as soon as I get home I'll give you more info.

Thank you very much!
I knew you Marine guys had the key to this part of the story!

Well, I checked at home, the data are correct, the site Tiger Unit Histories has the same info I have.
I have downloaded the diary of the Navy Command Tunisia, there is the notice, for example, of 4 MFP going from Biserta to Tunis on March 22, 1943, they could be the same MFP that carried the Tigers. If you are interested, I can give you the address of the ftp server, or even send the diary via wetransfer. As far as I know, at least one Tiger landed at Karrouba naval base near Biserta.
Best Regards
Federico
Top

It is possible that those were part of the Marinefährprahm that transported the Tigers. The naval history doesn't cover coastal movements that only repositioned vessels (not moving cargo). The Tiger Unit Histories state 22-23 March for the arrival of five Tigers, so I am assuming that the tanks were moved in two convoys.

Any MFP could take Tigers? i have read there were some "reinforced" MFP models for heavy loads.
Top
166 posts