Could This Be KASUMI?

Discussions on all aspects of the Japanese Empire, from the capture of Taiwan until the end of the Second World War.
18 posts

Could This Be KASUMI?

Found this pic on an IJN Facebook group IDed as possibly being KASUMI. 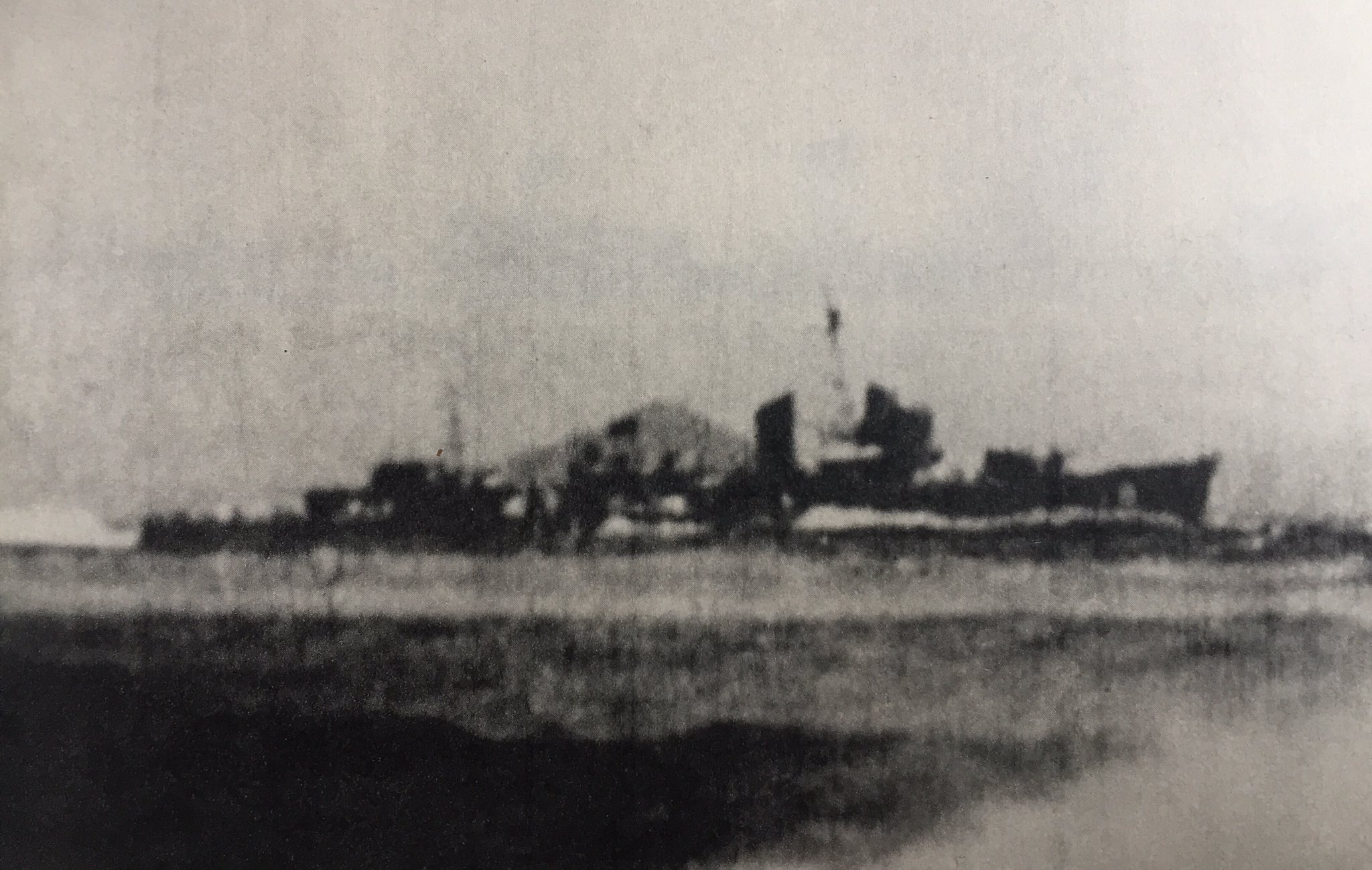 Could this really be her? She has a '9' on her bow, and is an ASASHIO-class; here are the possible candidates:


ijnfleetadmiral wrote: ↑
20 Oct 2021 01:18
Found this pic on an IJN Facebook group IDed as possibly being KASUMI.

Could this really be her? She has a '9' on her bow, and is an ASASHIO-class; here are the possible candidates:

Any way of making a positive ID? TIA for any help.

The second figure shows the result of applying the above rule. I'm afraid that the first photo is not clear, but I feel she was YAMAGUMO.

As always, my friend, your help is invaluable! I was really hoping it was KASUMI as there are so few photos of her known, but perhaps more photos are hidden away somewhere, waiting to be discovered. Thanks again!

Since KASUMI was Flag Ship of the 9th Destroyer Division (司令駆逐艦 Commanding Destroyer in IJN style), the white band was as follows according to the rules mentioned before. So the picture you posted does not show KASUMI, unfortunately.

A shame indeed, my friend...KASUMI is one of the least-photographed destroyers of the IJN. Well, let me amend that...she has very few surviving photos that we know of. Though her sister ARARE surpasses her there...I only have one photo of her:

If I may ask Fontessa, what book did the diagrams in post #2 come from? Were they from one of the Grand Prix Shuppan(?) books?

And thanks for using / posting those pics of Myoko Class funnel banding as an example.

Re Haguro's, so her top two white bands seem to meld / join into being only one wode one for front half of funnel, correct?

Let me talk about the funnels. The third picture shows two Treaty-type Heavy Cruisers - HMS Cumberland and IJN Myoko. Comparing the two ships, you will notice that the Myoko bridge structure was located rearward, giving her the space for the third turret. You can see why this was possible by looking at the third picture. The upper is Kitakami and the lower is Myoko. I couldn't get a picture of Cumberland, so I used Kitakami, which seems to have the same structure, instead. Both Cumberland and Myoko had 3 boiler sets and 3 funnels. Cumberland connected boiler set and funnel straight. On the other hand, Myoko devised the way to connect boiler set and funnel. The first funnel bent significantly backwards. IJN called it 誘導煙突 guided funnel. Then it was integrated with the slightly sloping second funnel. IJN called 結合煙突 combined funnel. The fifth picture shows the bridge structure, which could be located rearward by straddling the first funnel.
I used Mori’s handwritten pictures from his book in my fourth and fifth pictures.

Comparing Myoko and Cumberland, I feel that Myoko is more beautiful as a Japanese. But this does not mean that Myoko was superior to Cumberland. Myoko strengthened her armament against the United States and Britain, which won by number. Treaty-type heavy cruisers with limited displacement cannot satisfy all items. She had to sacrifice something. Myoko sacrificed range and habitability. The Royal Navy's mission was to protect the lengthy sea lanes and guard the colonies. The British colony located in hot areas, so Cumberland also had a great range and good habitability. Myoko Class Ashigara participated in the ceremony to commemorate the crowning of George VI on May 20, 1937. A British naval officer who visited her said, "I saw a warship for the first time today. We were on a hotel ship." It was a famous story that he sarcastic about Japan ship’s poor habitability. After all, the ship meets the requirements of her own navy was an "excellent ship".

Thank you fontessa for you detailed reply!

And I fully agree with you re the Myoko Class, as that also is my favourite looking IJN cruiser, while for the US I like the look of tha Atlanta Class. As for the Brits, well I am not sure which Class I fancy there.

I have those two Grand Prix books you mention also, and a large collection of other Japanese warship books, Maru Specials, Fukui volumes, the Museum photo book set, etc, of various ship types but..............alas my library is stored away half a world away (litterally) from where I live now. Hopefully next year, if covid travel restrictions keep easing I will rectify that by bringing many back here.

Anyway, again thanks for your input, as always interested on anything re the Myoko's.

Do you know if anyone has ever attempted to find MYOKO's wreck?
SFC, MS State Guard - First Always!
Top

Do you know if anyone has ever attempted to find MYOKO's wreck?

Well I belive we located it but never dived it.

Believed because the target we found in the location where she was scuttled had an abruptly ending stern, and matched length of Myoko with stern missing.

Didnt dive because not only was the water the colour of milk coffee and curent strong, but she is right in middle of main shipping lane. And at around 90 odd metres (300ft +) certainly doable, but a long drifting decmpression to end dive with large ships coming by every ten mins was out of the question. I think only way to dive would be to apply for an 'exclusion zone' (as is done when diving expeditions go to HMHS Britannic, but there is less travelled shipping lane, and ships there dont seem to always 'get the word' either). I think getting one in Myoko's location would be very difficult, if not impossible, given it is busiest / 2nd busiest(?) shiping lane in the world. Need some heavy hitters on side to get that one approved I would think. But hey, someone just may do it one day.
“We are off to look for trouble. I expect we shall find it.” Capt. Tennant, HMS Repulse. 8 December 1941
“A review of the situation at about 11.00 was not encouraging.” Capt. Gordon, HMS Exeter. 1 March 1942
Top

Was there any way of determining from the scan how she lies on the seabed (upright, on side, or upside down)?
SFC, MS State Guard - First Always!
Top

ijnfleetadmiral wrote: ↑
22 Oct 2021 07:47
Was there any way of determining from the scan how she lies on the seabed (upright, on side, or upside down)?

IIRC either upright or on her port side. Going on memory alone (

) given outline of wreck and depth to highest point possibly upright, but if so must be nearly burried to her deck level in the muddy sea bottom in that area. Not sure if I can access the side scan image/s any longer, as group has broken up, boat sold and ex owner / skipper now driving a tug in Darwin. I'll see if I can get, but don't hold your breath as skipper may no longer have, or currently not easy access to.

You didn't...I derailed it in the first place.

And while I would love to see the image, I completely understand if you can no longer gain access to it.
SFC, MS State Guard - First Always!
Top

山雲.jpg
Yamagumo above rushing at 30 knots, fifth battle speed. The approximate speed of her was determined by the length of the white wave created by the bow and stern. IJN has created a chart summarizing the relationship between the two. This is shown in the first picture. The white waves generated by her bow end between the bridge structure and the first funnel, so her speed was considered to be 30 knots. The white wave created by the stern match that. As can be seen in the first picture, the white waves created by the bow grow backward as the speed of the ship increases. The second picture is a photo of the second generation of "fast destroyer" Shimakaze, during her official trial. Her full official trial speed was 40.37 knots, and the "white wave" reached almost the stern.

fontessa
You do not have the required permissions to view the files attached to this post.
Top
18 posts